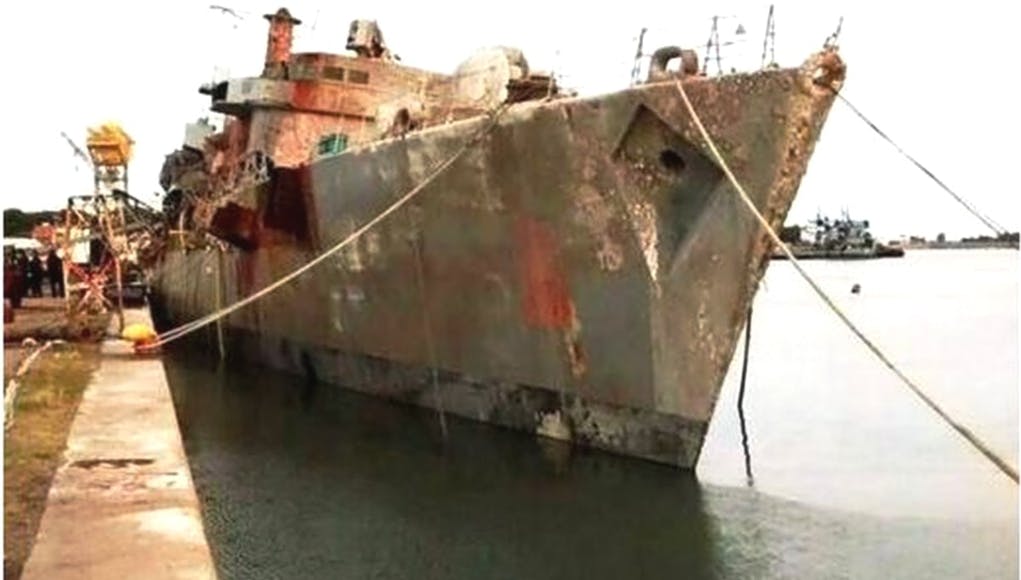 The destroyer has been re-floated in port after three years underwater.

In 2013, the warship suffered a broken valve which resulted in the flooding of several compartments, the ship took on a 50-degree list and sank at her moorings.

After almost three years, ARA Santisima Trinidad has been re-floated. It is understood that Argentina plan to recondition the destroyer and convert her into a museum.

ARA Santísima Trinidad was a Type 42 destroyer, the only one of her class built outside Britain. She participated in the 1982 Falklands War.

Abandoned in Puerto Belgrano because of lack of maintenance and funds, the final decision on her fate will be depend on the new Argentine defence minister, Julio Martinez.

Wow…. How could it be refloated…. Heavy man

Why turn it into a museum its history is pathetic unless they are going to make up a Fake back history for it.

Don’t worry, the Royal Navy could easily sink it!

Let them spend the money on the piece of rust.

Acording to sources, the ship had been canibilised and was being dragged to the boneyard when it sank.
Maybe someone canibilised a “load bearer”.

oh dear, another pillock with no idea criminal(?) are you a bigoted yankee loudmouth, or a disaffected spic?(criminal? look in the mirror, fool.

not kent your info is wrong it wont be cannibalised

you right steven is our decision not foreigner dumb atitude

and i was thinking it was a new kind of submarine

I think its a shame that we as a maritime nation with a long history of our navy, don’t make more use of former ships as museums instead of flogging them off for peanuts.

We should have at least kept Invincible and Britannia.

Steve, there are literally *dozens* of Museum ships in the UK. Here is a partial list.

Above water at last | Naval, Military, and Marine Life

Took part in the Falklands war? Their navy spent the time in port, too scared to go to sea.

crewed and commanded by idiots or chimpanzees