Home International Indian ships sink in port amid period of accidents and incidents in... 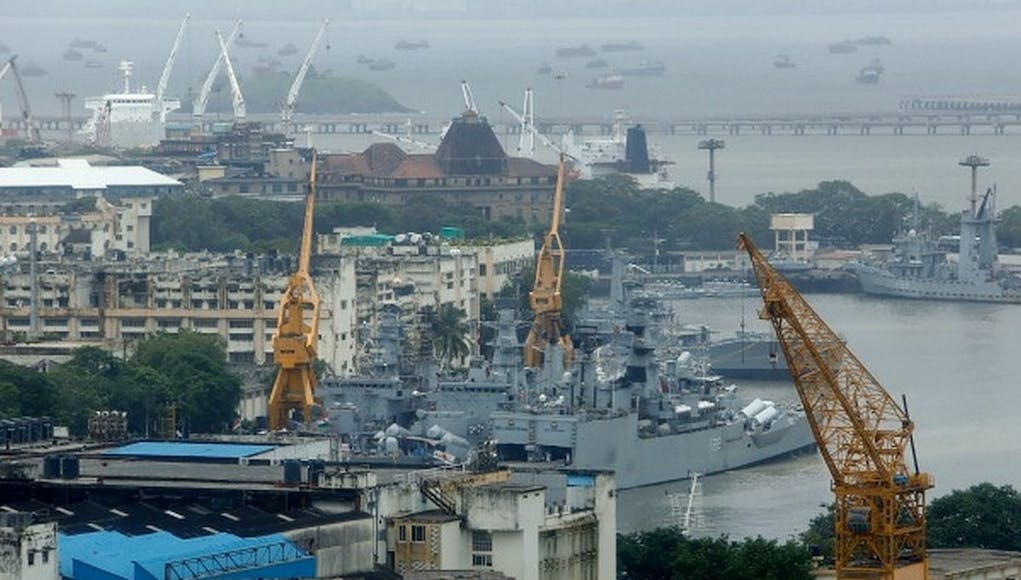 “During the fire fighting, two boats suffered damages and ingress of water and are submerged in shallow waters inside the naval harbour area. Efforts are in progress to salvage the boats.”

Not too long ago, an Indian nuclear submarine was left crippled after a hatch was left open.

The last few months have underlined severe issues with accidents in the Indian Navy. There have been 11 accidents involving Indian Navy ships and submarines since August 2014. While most of the accidents did not claim any lives, 21 officers and sailors have died in three mishaps.

In March last year, a fire broke out on the soon-to-be decommissioned aircraft carrier INS Viraat which resulted in the death of one and the injury of three others.

Navy sources told local news agency PTI that there was no loss of life or collateral damage to other naval assets in the harbour and that a board of inquiry has been ordered into the incident.

It is understood however that according to local sources, the fire started when a hatch was left open during routine maintenance. The sources said the fire broke out early morning in one of the security boats.

In April last year, a sailor lost his leg while two others were injured in an oxygen cylinder explosion on board INS Nireekshak. The explosion took place while a diving bailout bottle, a small 12-inch oxygen bottle that is carried by divers in their diving helmet, was being charged. The sailors were admitted in the Military Hospital, Trivandrum as the ship was on it way to Mumbai from Visakhapatnam.

In June, two people, a sailor and a civilian contractor, were killed by a toxic gas leak that occurred during maintenance work in the Sewage Treatment Plant compartment during the first refit of the aircraft carrier INS Vikramaditya at Karwar. Two other people were injured and taken to the naval hospital.

This is what happens when a power tries to be too big too quickly..

Trying to be big too quickly.. how is that related to this.?

It was due to a fire, not poor maintainance

A fire caused by poor maintenance

Oh Daz Vallis u are their when there is fire broke out. As you are so surely saying this.

And why did the fire occur Shwetabh Singh Rajput?

I believe it says in the title.

Go and check from other sources vessel was under maintenance when accident occur and because of explosion in one vessel other get damaged.

And why did the explosion occur..

Indian people trying to defend their poor maintenance lol the explosion and fire happned maybe during maintenance but that is why it happned IT WAS POOR MAINTENANCE simple fact of the matter Aryan Singh.

The navy is operating both modern and vintage vessels..as for India, its navy is aimed at pakistan and for an enemy with minimal naval strength, these boats are more than enough..there is no point in operating a lot of costly vessels against an obsolete naval force.

I cant admit that poor maintenance is the issue..but i rather put the blame on carelessness..

@Brian use some brain these kind of accidents occurs in every navy or do you want me to tag accident occurred in RUN, so better don’t act uneducated moron and look at your own depleting navy with depleting economy.

It could still spank your collection of garbage cans pal. Worry about our economy when you dont need foreign aid from it or when you can build a sewage network.

just 5hrs ago your Nuclear sub collided with a merchant ship which was armed with most sophisticated sensors available to RUN and this thing occurred because of either unprofessional crew of submarine or sensor failure what will you say about this?

It was not 5 hrs ago and what is the RUN? The incident you refer to was a mistake, no debate there but the boat involved was fully functional and properly maintained, unlike the two vessels currently on the bottom of your harbour.

This accident could have been turned into nuclear disaster near your coast because of poor crue/poor maintenance/poor ship/poor sensors.

It was not near our coast, it was in the medeteranian. You are not doing very well here are you? Pretty much everything you say is inacurrate.

Such defense much boring wow India.

Aryan Singh, the accident happened while the boat was under command of trainees, the sensors and maintenance of the Astute class submarines are the finest on earth, no sub outside the US Virginia class can even come close to its technical brilliance, comparing a training accident on a sub with a ship sinking at its moorings due to poor resource allocation and skills is ridiculous, India isn’t in the same league as the UK with regards the technology in the two fleets, that could change in the future but for now your outclassed.

I was going to blame it on Argentine naval advisers, but I could be wrong.

India may be able to afford hitech kit but it’s incapable of maintaining it at the required level. Just look at the disproportionate number of aircraft losses compared to other countries

Just check that, then say anything

Kapil Takkar the evidence is regularly reported in defence media sources. India has some of the worst safety records of any country!

kid go and check,only 1 crash in last 11 months even in the condition when IAF maintains 4th largest aircraft fleet and majority of them are old mig aircrafts.

This guy is talking without facts..idiots..

Alan Melapatt the facts are freely available to grown ups who don’t resort to insults!

Since jan 2015 U.S. military lost 17 aircrafts till incomparison to 3 aircraft loses by Indian Airforce. Is that because of poor maintenance in USAF ? “Facts are freely available take some time and do some research” !!!

Since 2010 Indian military lost only 13 aircrafts in comparison with 10 by Royal Airforce alone.10-13 makes no much difference so crushing British economy cannot maintain their already existing assets.? (PS: postponing Global combat ships,leasing P-8s, retiring AH-64s to save airframe lifespan are pointing to a not so good economy )

We have cut steel on the first type 26, the P-8s are not leased they are being bought outright and we are upgrading 50 Apache to the latest standard. Again everything you say is wrong. Try again.

Sarath don’t know where you are getting your figures from but they are rubbish, quite a few of those RAF and USAF losses were in Combat. We haven’t postponed the ships, they are still being designed, we are replacing our older WAH-64’s with the latest model and as for P8 we are buying it not leasing them! We are also buying the most high tech strike jets available and two brand new super carriers!

trained by the Argies? lol 🙂

trained by Argies along with captain & sailors of HMS Ambush :3

Well these brits are more interested in other peoples downfall than their gain.. we love to see each and every country rise .

99% of our stories are about the UK, so, no that is incorrect.

I know.. i was replying to some of the comments not the post.

From the defence budget, its evident that you cant put the blame on maintenance..the problem lies with carelessness from the part of crew in most cases..we Indians have less OCD compared to the west..lol..so chances are that people find shorcuts to do their work in minimum working hours and end up blasting things.

Hmmmmm, And theyre looking into powering a new aircraft carrier with a nuclear reactor.

I hope your Type-45s are working correctly lol… :3

The same mindset that never changes . Minds of arrogance is it? What happend type 45 is that too poorly maintained .

U want some… We can give.. Poor people, u looted our vast gold diamonds And heritage… U should keep in mind Indians are one of top richest peoples of UK.. India stands ahead of you even after all bullshit u people did here..

That’s all you can do insult Indians….. Indian Navy is supposed to be 5th or 6th largest fleet in the world so these kind of incidents do happen coz the tech is foreign as soon as homegrown tech is available i’m sure these incidents will decrease..

Mumbai right?! Take it or not India are very tardy persons even merchant vessels they reports and paper works is correct but when u see the ship or come onboard the ship is full of rust everywhere.

This incidents are happening in my country every now then

I scroll down to the page. I cant find anything related to India and Indian defense . We successfully tested autonomous under water vehicle yesterday. But i cant find that but what i found was this. What i understand from this is u people r just broad minded and jealous . Did u ever know what u done to our country . We r still dealing with the issues created by u people as kashmir pakistan bangladesh etc . Stoles trillions of money and other from us . Our ancient books and knowledge . And many other . U r… Read more »

Our tejas is flying successfully without even a single crash but u can’t tolerate someone else growing….