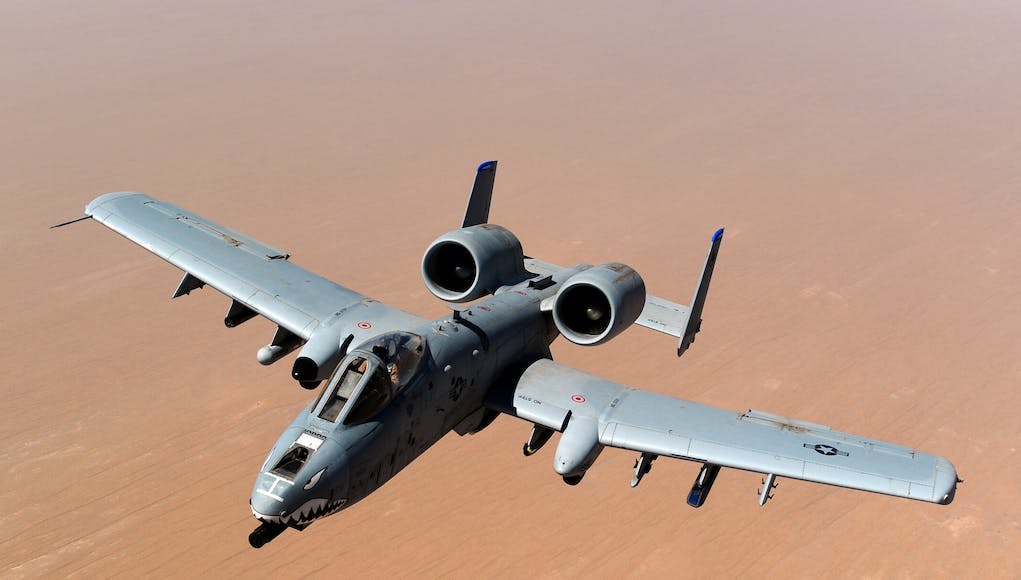 The US Air Force has deployed 12 A-10 aircraft in the south of Turkey to support operations against Islamic State.

The A-10’s arrived at Incirlik Air Base in Turkey last week. It is reported that the A-10’s replace the F-16 aircraft which had arrived in Turkey on a temporary mission in August 2015.

Incirlik Air Base is primarily used by the United States Air Force and the Turkish Air Force, although it is also used by the Royal Air Force.

According to the Department of Defense in the US:

“Twelve A-10 Thunderbolt IIs have arrived at İncirlik Air Base with their personnel, equipment and support personnel to replace F-16 aircraft from the Aviano Base in Italy” the statement read. As a NATO member and a US ally, Turkey is an important partner in the coalition against ISIL and the use of Turkish bases in U.S. operations continues to strengthen us significantly.”

The A-10 features the 30 mm GAU-8 Avenger rotary cannon as its primary armament. The airframe was designed for durability, with measures such as 540kg of titanium armour to protect the cockpit.

Loved the sound of the “Warthogs” when they regularly flew over my house en route to and from RAF Upper Heyford.

seen these in action they are deadly..i believe they developed the gun first and then built the aircraft around it…just sounds like a loud fart when they fire a burst off..

That gun will have them shitting their sandals !

The air force are getting rid of them too! They’re mad, there’s nothing else like it flying!

Sort of makes sense to bin the A-10. It would be absolutely useless in any conflict against someone with real armour. It’s fine against cave dwellers and farmers but against anything that isn’t obsolete Russian armour it’s dick outta luck.

Not really! That gun can still put holes in a main battle tank and it can also carry a multitude of other tank smashing kit. The world’s military still put boots on the ground and it can deal with all of it. The real advantage it has is that it is so tough; the cockpit is armoured and it can still fly with half of it missing!

It can take out any tank and can u imagine how the bad guys feel with a A-10 above them blasting with that cannon !!!

I might point out that there’s not many countries who can afford a top of the line MBT either; they’re in the region of £3m a piece and are less desirable on the battlefield. Even our army is considering moving to lighter and faster armoured vehicles.

“It would be absolutely useless in any conflict against someone with real armour”……..!!!!!

The USAF is quite right to get rid of these, it’s a single role aircraft unlike the F15C it’s so determined to keep in service…..oh hang on a minute

Its the greatest ground attack aircraft ever made… It takes after the dehavilland mosquito of the same ilk that had a naval artillery piece installed in it.

Awesome bit of kit ! Inject some 30mm rounds into the bad guys

?The hills are alive with the sound of Brrrrrrrrtt ?

If soviets start targeting and killing Syrian civilians, will NATO step in, and prove their purpose and reason for being ? they have already shot down a civilian plane, murdering 100’s of people.

Badass plane, still after all these years it’s still relevant and still deadly. But you have these high ranking military officials who don’t support it and who want to kill the A-10. Well I say fuck them, cause you know what, they are still saving our soldiers lives. And that’s what the A-10 was built for.