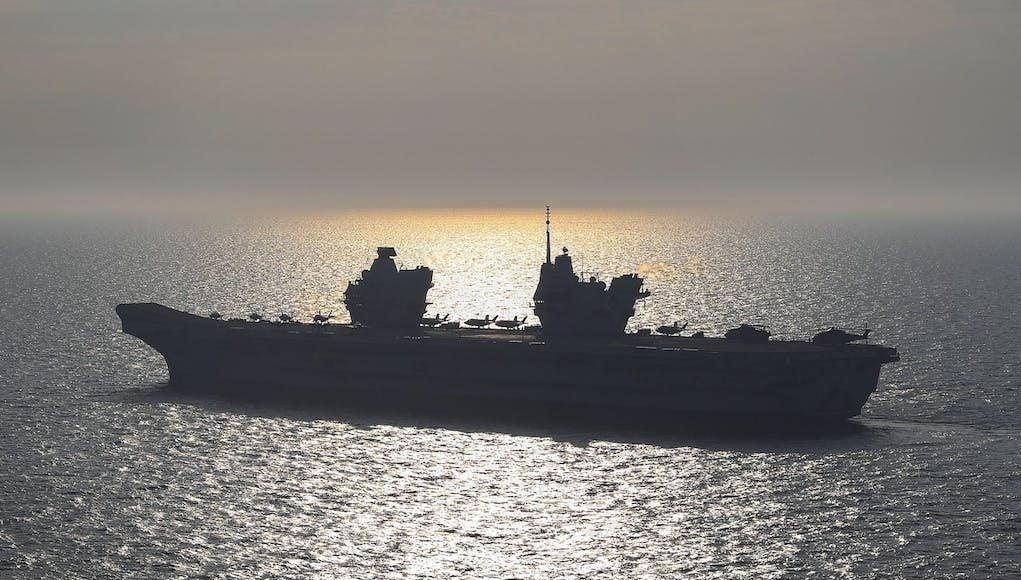 Three Five Round Bursts and Go On!

What’s next for HMS Queen Elizabeth?

The Ministry of Defence say that the deployment is expected to include two Type 45 Destroyers, two Type 23 Frigates, two Royal Fleet Auxiliary logistics vessels and a submarine in addition to an American destroyer and potentially other allied vessels.

“The task of protecting an aircraft carrier involves many ships, submarines and people. A Carrier Strike Group has an escort in the form of Type 23 Frigates and Type 45 destroyers, giving the strike group the ability to defend against above and below the sea threats. The Royal Fleet Auxiliary also play a vital role, keeping the strike group replenished with food and armament. The Queen Elizabeth-class carriers will be deployed with up to two operational Lightning squadrons and 24 F-35Bs on board, with a maximum capacity allowing for up to 36.”

You can read more about the specifics of the Carrier Strike Group here.

I can just see it now. The battle group has a minor tech issue, the British press hear of it combined with bad journalism will blow the problem out of all proportion. An MOD spokesperson will address the issue with a bland statement not amounting to much.
You know its going to happen.

No disrespect to George but surely RN could do better even on a slow news day?

The machine gund need to be in working order especially travelling through the Suez Canal.

Any idea SB, how risky is it traveling along the Suez Canal banks, is it likely to result in a terrorist attack?

Maybe they’ll have the crew throwing stones at incoming missiles and aircraft next….. and tell us about it.

If it has to resort to its machine guns, the carrier is in trouble.

A report on her testing the newly installed 30mm would be a tad more interesting.

There have also been a couple of RN video’s of .50 cal on ships recently, whats really interesting is they have loads of GPMG and Miniguns and on the helo’s they have the newer M3M….but the ship mounted .50 cal are all older M2’s with rather old sighting systems. Something has caused the RN to go and raid the stores for a load of old MG’s….

I understood 30mm were fitted during the latest insertion period prior to her first operational deployment? We surely aren’t considering sending her out with key weapons missing?

I guess it all depends on whether you think they are important in peacetime.

More a case of if we’re showcasing our new carrier we should ensure all the weapons we’ve told the world she will have are actually fitted. Even in peacetime there is always the risk that a terrorist organisation my try and ram a boat full of explosives into her, even while at anchor on a friendly port visit……

Well yes, I agree, I’d like to see a deck load of British F35B’s, Crowsnest equipped Merlins, Apache’s, 4 not 3 Phalanx, 30mm, Miniguns and dare I even suggest it, some VLS.

Wouldn’t that be nice

Wartime has a habit of catching slow moving ships at sea half the world away from home.

Unless they are operating in home waters they should be equipped ready to be diverted to an active operation. No ifs buts or maybes or mod crying about the costs involved.

This is very true, but I find that we as a nation really need to get our head around understanding the only difference between peacetime and wartime…is that someone hasn’t opened fire in that minute. Once we understand the concept of imminent peril, we’d arm our forces, and our ships, rather more robustly.

They put out a decent weight of fire and are effective against swarm attack from small boat and/or drones. Would prefer the autoguns and radar guided 30mm dsm series weapons though. With side mounted martlett missiles.
Still for defence of vessel whilst in dock and/ or transiting restricted waterways or ports they are excellent defence.

To be honest I have nothing against some good old fashion Hvy. MGs, good at what they do, flexible, and cheap. But like with many of our ship, everything feels a tad under gunned (OPVs are truly a stand out on this one).

Not really in trouble, no…
The guns are for basic small boat defence, nothing fancy is needed for that.
Although not super interesting… it’s still fun to be involved even in the small things like this.

Carrier travel with escorts whose job it is to protect it from threats. If small craft got through perimeter than that is a giant clusterfxxx

Tell that to USS Cole crew. Caught with pants down by a suicide bombing RHIB. A vessel transiting narrow waterways and/or a foreign port will always need close range guns. HMS QEs escorts are useless and futile at those times.

Hopefully the less talented individuals in government/whitehall wont assume given this news that as the machine guns are working other major weapon systems such as the newly integrated Martlet/Wildcat combination are now surplus to requirements, although I fear it maybe too late for that already.

I think you are romancing. The govt have put up money. It’s the armed forces who to decide where to spend it.

Don’t use too much ammo. The cost might result in the machine guns being retired in the upcoming review like everything else…

Joking of course, it is almost as if George posts these sort of articles on ships firing machine guns deliberately, as you know the sort of responses it will provoke!

They have their place. Whether the ship has VLS, Phalanx, Cannons, Sea Ceptor or whatever they’d still be there.

If you need to use a 50 cal on a carrier, you are doing something very wrong. They weren’t even that effective in WW2

CRW, close range weapons such as 50 cals, GPMG and Mini Guns are Force Protection weapons. They give the Ship be it big or small the ability to protect itself from asymmetric threats.
So things like entering and leaving harbour where manoeuvring is restricted, alongside in harbour they can be used as Command Controlled weapons to protect the vessel from an attack.

And they are not wrong with the tag
Gunnery is Funnery

Cleaning the bloody things afterwards… Not so much!

George, there is so much material being repeated in these articles, Maybe it’s better to have more quality articles no less of this type of stuff?

I’d rather they were practice firing air defence missiles than HMG’s, having no last ditch missile defence system is unbelievably stupid in my opinion. She’s a £3.4 billion asset which obviously makes her a massive target for everyone and everything, I wouldn’t trust a couple of Phalanx to provide enough protection for her to be honest.
It wouldn’t be too hard to her to be retrofitted with a RAM system or 2 and the missiles aren’t expensive in the grand scheme of things considering her hefty price tag.

Thank you. You are utterly correct. Not to mention foreign port visits. Making a large number of 50cal GPMGs and mini guns vital for ship defence.

‘Heavy Machine Guns’ Really??!! 5 round bursts!! You really couldn’t make it up.