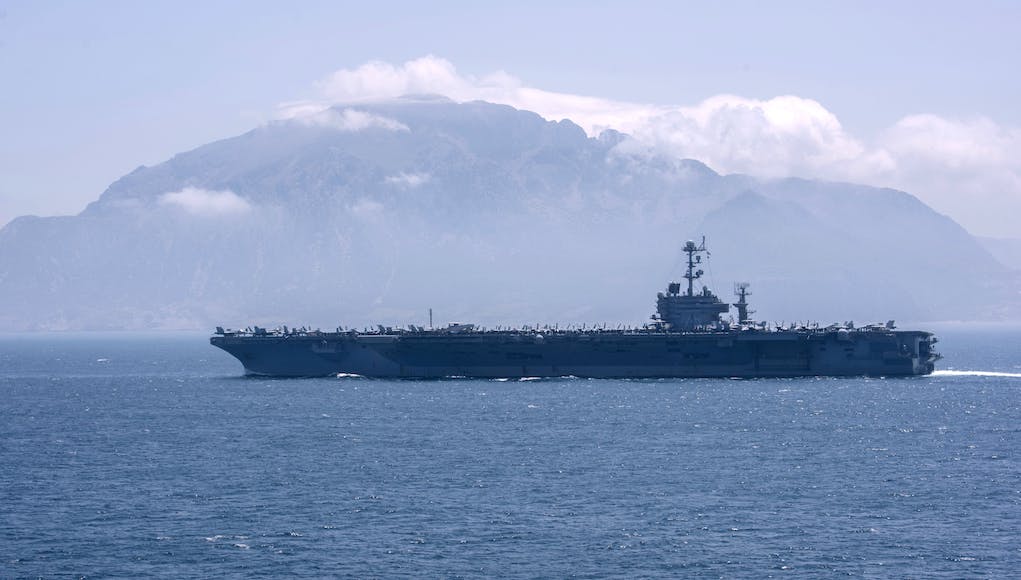 USS Harry S Truman and her carrier strike group have passed through the Strait of Gibraltar and entered the Mediterranean Sea.

“I’m proud of the professional seamanship our Sailors showcased as we transited through one of the busiest sea lanes in the world,” said Truman’s Commanding Officer, Capt. Nicholas Dienna.

“It was a beautiful spring day, and these men and women executed their responsibilities flawlessly.”

Along with Truman, the guided-missile cruiser USS Normandy and the guided-missile destroyer USS Forrest Sherman made the journey from the Atlantic Ocean to the Mediterranean Sea through the second busiest waterway in the world say the US Navy. But this event carried with it more than breathtaking visuals of the Gibraltar landscape. More importantly, it served as a strategic step for the Harry S. Truman Carrier Strike Group.

“Entering the Western Mediterranean enhances our ability to support national and regional missions in the Sixth Fleet area of responsibility,” added Dienna in a US Navy release.

“This includes working with our NATO Allies as well as European and African partners to maintain the right presence when and where it’s needed.”

According to the US Navy, just prior to entering the Strait of Gibraltar, HSTCSG completed Lightning Handshake 2018 with its long-time African partner Morocco.

“As the HSTCSG continues on its regularly-scheduled deployment, successful completion of events like Lightning Handshake 2018 and transiting the Strait of Gibraltar demonstrate Truman’s capability to strengthen partnerships and flexibility, to rapidly respond anywhere our team is needed around the globe,” added Dienna.

An aircraft carrier with some real teeth.

I wonder if the QE will sail back to the US with her at the end of this deployment?

With America showing interest in this class of carrier, it could be good for business on both sides of the pond. Value for money I’d say!

That article you linked to gave Truman’s last deployment in 2016 as 8 months long so if this deployment is of similar length then QEC should have been in the USA for a while before Truman heads home and F-35B trials off the carrier should already be well under way.

(Chris H) the MoD has already said QE will be in New York for mid September….

I am curious. What is the battle group msde up of in a standard peace time deployment, both escorts wise and planes?

This one has been detailed on a previous article here – https://ukdefencejournal.org.uk/us-carrier-strike-group-enters-european-theatre/. That article lists the escorts as 1 Tico and 3 AB initially with 2 AB to join later. I assume there are also various supply ships and at least one SSN kicking around, given the US resources probably more than 1. To put the escorts into context, when that group is up to full strength with all 5 ABs it will have 6 x 96 plus 1 x 122 = 698 Mk41 tubes across all of those escorts. Compare that to the likely total Mk41 count of the… Read more »

The HSTSG is actually closer in hull numbers to an actual Carrier Battle Group of the Cold War Days (probably to send a message). The normal CSG deployment is in the range of 1 CVN, 1 Tico, 2 AB, and an SSN.

The USN is now dialing back the lengths of deployments as well to save wear and tear on ships and crews. The CSG might be back in Norfolk within a few months.

(Chris H) – I always think it is worth noting certain aspects when comparing the Royal Navy (or any of our Forces) size with the USA: * Any simple numbers must be multiplied by 6 to equate population size difference. * The population (x 6) comparison should also be multiplied with the larger tax take of the US Government for its military deploying 3.5% GDP against our 2%. Or 75% bigger making a numerical comparison @ 10.5% (So our equivalent carrier force is 21 compared to the USA) * We have no intention or desire to dictate international politics by… Read more »

Problems with your model: 1. The US is only 5x larger in population. 2.The US does not tax it’s citizens as much so it gives the Military a larger share of a proportionately smaller budget. 3.Your Carrier model doesn’t take into account the difference in other ship types- Destroyers, Cruisers, Amphibs,big deck Amphibs, and Submarines. 4. A vastly larger Army, National Guard, and Marine Corps. In addition the enemies of the United States are not perceived or imagined they are very real. As for areas of responsibilities. Well we damned sure can’t rely on the RN based at Malta or… Read more »

(Chris H) Elliott – Interesting that I only sought to give context, balance and ask a question. I deliberately did NOT criticise or demean your country. But in typical Yank fashion you respond by demeaning and abusing mine: “Peace does not preserve itself, it takes vigorous action” – One country that has very actively pursued and maintained peace at great cost to itself is the UK ” the UK abdicated responsibility in favor of massive, bloated inefficient welfare systems.” – Well that is some distortion but at least we do not have people die or are bankrupted for lack of… Read more »

A disclaimer before making a statement does not change their effect or meaning. I was merely correcting your data as to the size of the United States. In addition to the proportion Military spending is within a budget that taxes less of the economy. Indicating a higher commitment to national defense, one should not find facts demeaning they simply are. Also people in the US do not die from lack of healthcare. Get bankrupted yes, but die? No. What you have in America is choice. If you wish to expend YOUR money and the benefits you had the foresight to… Read more »

the entire rn should have at least this much, got to be credible on this metric.

I hope we make up for this with umanned sytems, containerized weapons modules and arsenal ships.
We should also be uparming the RFA and OPVs and adding networked sensors to everything, eg carrier deployed work boats

That’s not a fair comparison though. Many of their tubes will be taken with anti air missiles and need to fire multiples to guarantee a hit from what I’ve heard on here. Once you factor the 48 seaceptor on each t45 and t26 the gap narrows considerably. But yes to lower numbers of other types of missiles but not by such a massive margin.

Obviously Sea Ceptor can quad-pack into a Mk41 tube so for instance T26’s 48 Sea Ceptors would take 12 Mk41. Still, you’re right that it wasn’t a fair comparison (mea culpa), especially when you also have to deduct more Mk41s from the US total to account for any Sea Ceptor that T31s carry (or at least I hope T31s end up carrying some). A bit of a silly comparison really, but at least shows somewhat how impressive the USN resources are in comparison to everyone else’s. On that one vs multiple shots to kill thing – are we really so… Read more »

I understand that an ER version of this is being considered by adding an extra booster stage to the missile (which only fills ~ half the vertical launch tube. This will address the major shortcoming of the system – it’s short range. Otherwise, excellent missile.

Just a thought – all the maths regarding how many VLS Tubes are available and with what weapons is very interesting but it presumes that all of them are actually loaded – would ships in peacetime always sail with a full weapons load ?

That was actually a question that I considered asking Helions, i.e. whether there was any general scuttlebutt on his side of the pond about how fully loaded ABs and Ticos tend to be when they sail and how sufficient the stockpiles of various weapons are. We can all count planes and tanks and frigates so those are numbers that are quite visible to the public. If a government wants to quietly save money, it hopes without the voting public noticing and with a careless disregard for military effectiveness, a good way to do it is to run down weapons stocks,… Read more »

Good point Julian but the Germans are not alone in that. It’s almost standard practice in places like Italy etc.

” If a government wants to quietly save money, it hopes without the voting public noticing and with a careless disregard for military effectiveness,” During the 80s some bright spark decided that if they removed all the fire extinguishes from army vehicles they could save a load of money. Funny enough for some very strange reason it wasn’t long before they came back. In the 2000s the British government of the day decided to get rid of the 27mm cannon on the Typhoon, then after spending millions finding out that the gun was actually part of the aircraft, and couldn’t… Read more »

Which raises a thought: Given Tornado (the ‘T’ in NETMA) is now basically at the end of its life and Airbus (Spain & Germany) sees its future elsewhere should this body now be dissolved and a huge amount of money saved?

It is my understanding that CSG’s sail on deployments “full loaded for Bear” conventionally. In the fissile category – I have no idea…

No US Navy Carrier Task Force sailing into the Mediterranean and into the Middle East where American forces are engaged in combat is not “fully loaded.” No SecDef would survive the wrath of Congress if that were to happen.

How is a CBG going to enter the Med under a blockade by russian UUVs and nuclear-armed, long-range, AI controlled and networked torpedos? by the dozen or maybe hundreds.