Home Sea AQS-24B Minehunter to be demonstrated to in Portsmouth 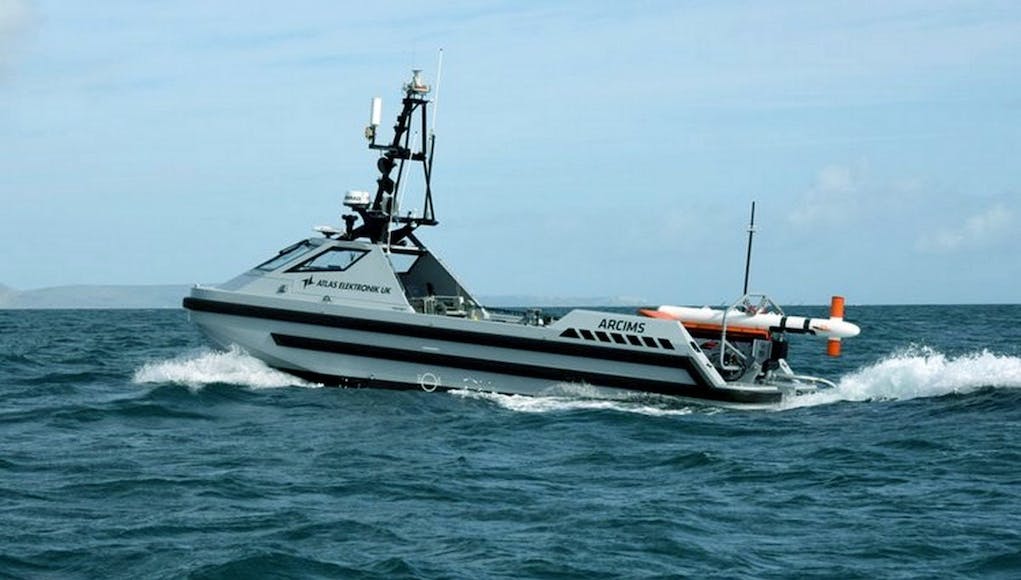 The Northrop Grumman AQS-24B Minehunter will be exhibited at the 2018 Undersea Defence & Security Conference in Portsmouth this month.

The manufacturers say it uses a high-resolution, side scan sonar for real time detection, localisation and classification of mines at high coverage rates and a laser line scanner to provide precision optical identification. The AQS series minehunter is used both domestically and abroad and has logged thousands of hours of operation.

At the recent Expeditionary Warfare Conference in Annapolis, Maryland, representatives of the US Navy praised the AQS-24B minehunting system for its performance in exercises in the Arabian Gulf and in South Korea.

The AQS-24B completed fleet introduction as an upgrade to the already operational AQS-24A in the spring of 2017. The upgrade added a state-of-the-art High Speed Synthetic Aperture Sonar capability, developed and built by Northrop Grumman, which significantly increased the system’s sonar resolution for mine detection, localisation and classification.

US Navy Commodore Mike Egan, Commander Task Force 52 (CTF-52), based in Bahrain, commented during a panel on mine warfare at the conference that, “The AQS-24B is performing extremely well in theatre and exceeding the expectations of the fleet operators.”

“The AQS-24B is operated from both the MH-53E heavy lift helicopters from Helicopter Mine countermeasures Squadron 15 (HM-15) and from the Mine Hunting Unmanned Surface Vessels (MHU) in the Arabian Gulf.

The 2018 Undersea Defence & Security Conference in takes place March 20th to the 22nd.

This is a major piece of kit for the RN, I think this will mean we can sell off our Minesweeping and hunting ships and replace with T31’s/Bays, OPV’s loaded with these thereby allowing us to increase the escort fleet.

Its probably the only way we will get the force balance we need in current budgets.

Could they replace specialist diving teams and equipment such as sea fox carried on the minehunters or would they complement some of the existing capability ? They do look very useful.

Another USV or a helicopter can deploy a mine neutralizer (the US use Archerfish) against mines detected and localized by the AQS-24B. Or Clearance Divers can swim down from a manned boat.

That’s certainly how things are looking: hence the mission bays on the Types 26 and 31 and the River 2 crane and container space.

Would losing 12 MCMV really save that much though?

I hope the specialised divers of Fleet Diving Group are not dispensed with.

Divers would remain as they are needed – I suspect they will operate from a Bay or assigned T31.

ultimately my view is it allows us to build a load of T31 (25) and set them up 8 of each (MCMV, ASW, GPF) this will actually increase our capability across all of these areas whilst losing specialist hulls.

We need to be at the forefront of this – not least so we can sell our old equipment before everyone catches up.

Over 25 years works out at 250m per year Daniele. Wouldn’t buy them all at once. RN is a long term scheduling and fleet management exercise in my mind, and we constantly get it wrong. £3.5bn pa will buy everything they need including Successor but has to be each and every year. This is to buy fully fitted ships – but does not include the ridiculous costs of maintenance etc that are so flippantly added to make our products look incredibly expensive. We need to adopt systems like this to be able to rebalance our force to more escorts and… Read more »

Strategy is to sell the current MCM to the locals And create fleet MCM capability based on
https://www.bmt.org/news/2017/09/bmt-introduces-venari®-85-a-revolutionary-mcm-concept-design/
Beats sending a Type 21 in a suicide mission as was done in the Falklands

So is the idea that each Venari launches one remote Arcim which launches multiple AQS-24 ( or similar)? Struggling to see the advantage over the current plastic MCMV fleet which can launch and recover multiple AQS directly.

They effectively replace the mine hunters – so a Bay on Kipion could have 8-16 of these and do everything our current force are doing and more (mhvc only as I know they do other stuff).

From what I have read it is very effective and de-risks the situation by having our people in a standoff position.

They will still need to retain the hunting capability. Sweeping covers wide areas quickly but not with anything near 100% certainty . Hunting covers small areas slowly with near 100% certainty. If you are going against ground mines that bury themselves, are designed to attract marine growth for camouflage, deep water captors or rising mines you will need to hunt. The problem with mines is they are sneaky , difficult to find and cheap and easy to deploy. Low mag , low noise GRP MCMVs are the best for getting rid of them . But if you can use drones… Read more »

When will this be happening?

In a way I think we are seeing the early steps as MCMC crews migrate to River 2 and we begin to run down the MCMV fleet.

The Rivers are too noisy for MCM, this is the proposed new MCM vessel which has a low end ASW capability
https://www.bmt.org/news/2017/09/bmt-introduces-venari®-85-a-revolutionary-mcm-concept-design/

The plan is that the mother ship is nowhere near the mines – it send in the UV’s. They are essentially a carrier platform and CnC.

The atlas boats can also send down charges to detonate and can also be manned if required.

So in that respect – it doesn’t matter how loud or what material they are made from.

That is why the BMT design is steel;) given that they need to hang around in hostile littoral waters they need to be a little fighty

Drones are the way forward, and an essential for the British military due to the money they save in operating costs. I can definitely see minehunters being replaced wholesale with drones.

Thales is leading a joint UK/French Maritime Mine Countermeasures study to develop an equivalent USV/UUV system. Stage 2 of the program, started in late 2016, is to deliver prototype systems to both countries.

Interesting idea, but I can’t really see them weathering a force 8 on the Beaufort.

Excellent force multiplier. Will be perfect for littoral waters.

Afternoon everyone This is one of the many new technology force multipliers the RN have been actively looking at over a number of years, something that can reduce the number of platforms the RN has to run but increase the capability of the remaining platforms. The USN has demonstrated that this equipment can be deployed from rotary air (MH-53 or RN Merlin (Commando Version with tail gate), remote fast boats (as demonstrated in photo) or as others above have mentioned via a parent (RFA, HMS or via detachment on friendly nation vessel – think RN detachment on USNS or USN… Read more »

The MCMV primary role from Faslane is Bomber route survey. That will not change.

The requirement for hunting in deep water, which the Sandowns where designed to do, will always remain. A low signature MCMV with a VDS is always going to be better at that work than a T31 ( or what ever they use) with drones.
Drones are good for shallow water but if you need to search deep water its still going to be time to get out the S2093 and drop the conker down to 200+ meters.

G, what do you think of the BMT design?

Its been on the board for a while. The RN was looking at using Hunts not a new build, to carry the drone boats and act as mother boats for them. That way you can still do the drone work and get all the advantages of having an MCMV with its crew on task at the same time. However Issues with handling the boat from the sweep deck needed ironing out..

You can see the change coming. We can send a drone instead of a manned fighter bomber to loiter over Syria; so why would we want to send a ship loaded with dozens of highly trained and valued seamen in to an area we suspect has mines in it?

Gunbuster
Reply to  The Snowman

Because you need a highly trained crew and a specialized vessel to find the mines.
The variables of mine type, depth of deployment, environmental’s all add up to make it like looking for a needle in several haystacks spread out over several fields.
Even with drones you still need people to find the mines by analyzing the data from the drone and then to deploy the countermeasures.

Morning The MCMV fleet has been slowly reducing over the last 5 years and now, against it current tasking, has probably reached critical mass. The Hunts are now reaching the end of the financially viable life (but not the end of their operational life) and will need to be replaced. What we know is to cover the reduction in capability governments like to buy new toys (BMT 85m for example) which creates jobs and therefore the false notion that capability is being replaced. They will then explain how the new vessels can do more and stay at sea for longer… Read more »

Why do the hunts need replacing?
The hulls are GRP and there is nothing wrong with them. In fact they will prove to be a major pain in the arse to get rid of as you have to chop them up into bit sized pieces and dump them in land fill.
The recent re engine work has improved the propulsion system. Most of the electronics on board are pretty new.
There is probably another 15 -20 years left in each one if the maintenance and obsolescence issues are managed properly.

Morning
Apologies for delay in reply.
Cost of platform is not just measured by the equipment in it but the manpower to run it and more importantly it’s whole life cost. All of this consumes RDEL.
You have already mentioned in an earlier post that the Hunt has has problems with AQS-24 and with the advent of new technologies this will only be exasibated.
New platforms means CDEL spend not RDEL and presents the most important part – a good news lie for politicians to advertise.

The Australian Frigate Competition: Getting the right ship for the right deal – PARAMUSESA

[…] array sonar in support of the ships core ASW role; or for surface reconnaissance, hydrography and mine counter measures in support of an expeditionary […]

The Australian Frigate Competition: Getting the right ship for the right deal

[…] array sonar in support of the ships core ASW role; or for surface reconnaissance, hydrography and mine counter measures in support of an expeditionary […]