BAE Systems has unveiled a range of products that it says will modernise the capability of future combat systems on complex warships.

The firm say that these innovations will help naval personnel improve their decision making in the future battlespace, allowing them to respond more readily to threats. They will also be designed so a vessel’s combat systems can be easily updated, helping to maintain operational effectiveness for many years to come and reducing through-life support costs.

“These technologies have the potential to transform maritime warfare and greatly increase the situational awareness and efficiency of crews on board Royal Navy ships. Our combat systems expertise and investment in future technologies will ensure we continue to deliver innovative capabilities to navies.” 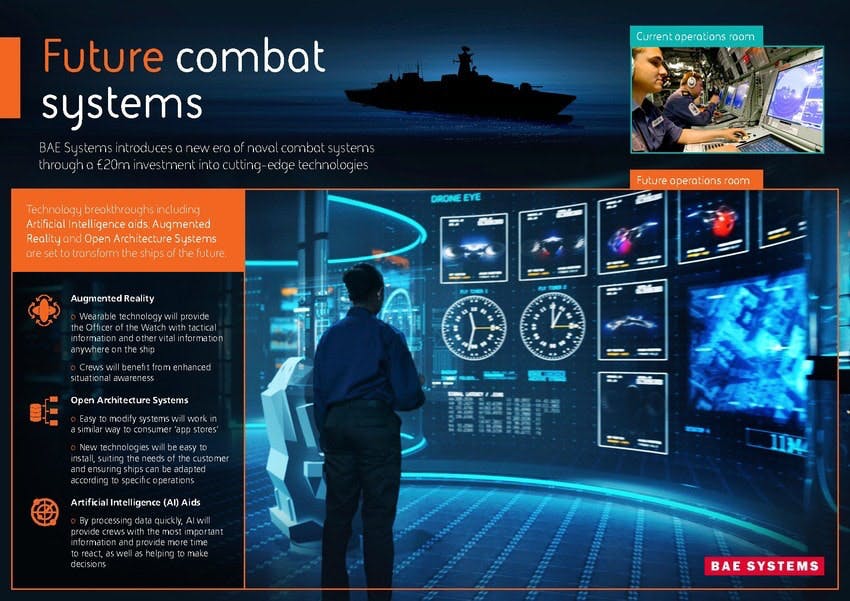 The range of technology unveiled by BAE is described below, in BAE’s own words:

Part of the investment will see the integration of AR into the bridges of naval ships, through products such as wearable AR glasses. This will allow an Officer of the Watch, who is responsible for the ship’s safety, to work outside of the operations room and still be able to see tactical situation data and other vital information from anywhere on the ship.

This ability could result in information such as the location of friendly vessels or other data being overlaid onto a real world view, giving crews enhanced situational awareness. The use of augmented reality would allow the officer to spend more time maintaining a ‘heads-up’ visual lookout without the need to refer to a console or rely on clarifications from his crew – instead, taking control of situations with increased effectiveness and adaptability.

The Company is enhancing the Shared Infrastructure technology it develops on behalf of the Royal Navy by introducing ‘open systems’ architecture. Open architecture technology will work in a similar way to a consumer ‘app store’, allowing crews to deploy new capabilities, increasing their flexibility and ability to respond to emerging situations in the future battlespace.

The system will allow a ship’s combat systems to be quickly reconfigured to suit the requirements of specific operations. By introducing increased flexibility, ships can be equipped with tools tailored to a wide range of specific activities, from mine disposal to humanitarian missions.

These essential systems give crews the information they need to track, analyse and respond to threats in combat, as well as coordinating resources in other operations including intelligence gathering and disaster relief.

The MISC facility is already testing new combat system components for the Royal Navy’s Type 26 Global Combat Ships. The first in class, GLASGOW, is being built by BAE Systems in its namesake city.

That’s precisely the point; the current information overload. There are so many sensors and so much information beamed to the onboard analysts they need appropriate tools to sensor fusion, data management, visualisation and much more.

Doing this on a keyboard is slow, too slow much of them. As an analyst, you don’t want or need to get bogged down in the maths and the algorithms, you simply want to visualise, in the best possible way, the information before you and then make an informed decision.

Crikey, with the recent spate of collisions and navigational errors maybe they should simply train the bridge crews to look out of the window, never mind augmented reality, basic reality needs to be grasped first.

The riddler
Reply to  Basil

At least these glasses will enable the OOW to look really cool – ‘virtually’ up the moment they collide the tanker.

To be fair if it includes something like the F-35s all around display doodad then it may well help stop collisions. Obviously more involved than that but still.

“This will allow an Officer of the Watch, who is responsible for the ship’s safety, to work outside of the operations room and still be able to see tactical situation data and other vital information from anywhere on the ship”

HMS Sheffield’s OOW was rumoured to be having a coffee in the mess when the Exocet missile hit. No doubt he would have also left his VR glasses behind too. No cure for stupid.

I dunno he could have vitually drunk his coffee while keeping his peepers open for incoming missiles while the waving of a virtual custard cream would instantly launch all manner of countermeasures. So less mocca-ry please.

What’s the betting this is based around Hololens which no doubt ensures a blue haze of death occurs every time a crucial moment Arrives. I doubt that there will be time for a re boot as that Russian hypersonic missile locks on.

In the nicest possible way I feel as if the responses to this article have only highlighted the advanced age of the majority of the readers on this site. The advantages of augmented reality when compared to virtual reality is that it overlays the information on top of the world rather than replacing the real world. I.e. the officer of the watch is able to view the information while still being able to see clearly out of the window. The speed and convenience with which AR technology is able to convey information to the technically literate convinces me that it… Read more »

Just get the OOW to understand the concept of CPA and TCPA, understand basic rules of the road and managing your UKC at all times in a seaway.

AR and VR only re-present the same data you can get from existing systems (mark 1 eyeball, and ARPA).

Thanks – I am 42 – if that is advanced age I don’t know – but at least it means a decent level of experience and sea time has been accrued upon which I can make a judgement.

I didn’t mean to offend and for the record I wouldn’t consider 42 as advanced age :). I wasn’t saying that these systems are necessary as obviously they haven’t been for centuries. As you pointed out above there are more than enough systems already in place to aid with the navigation of the ship but I think that a system like this would only be of real benefit in a combat situation, where any way of increasing the speed with which decisions can be made can be critical.

Yes, but will it allow the XO get to talk to a giant blue Hologram of the head of the Queen?

We need to invest in every new technology we can and not get stuck in the mindset of ‘but thats the way we’ve always done it’, but this concept is frankly ridiculous, first of all who needs an ops room that big, but more importantly you can’t have these blue holograms everywhere, it would just get confusing, you could be looking at a target at the ‘radar'(or whatever) hologram display and it could easily be on another display, you wouldn’t be able to focus on the mission set. As for these circular planning tables with the holograms in the middle,… Read more »

PS. I just read that it says ‘augmented reality’ so yes it will require a headset to see it!

How many hundreds of millions will it cost that could instead be used on actual ships? 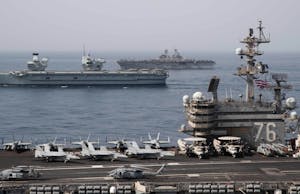