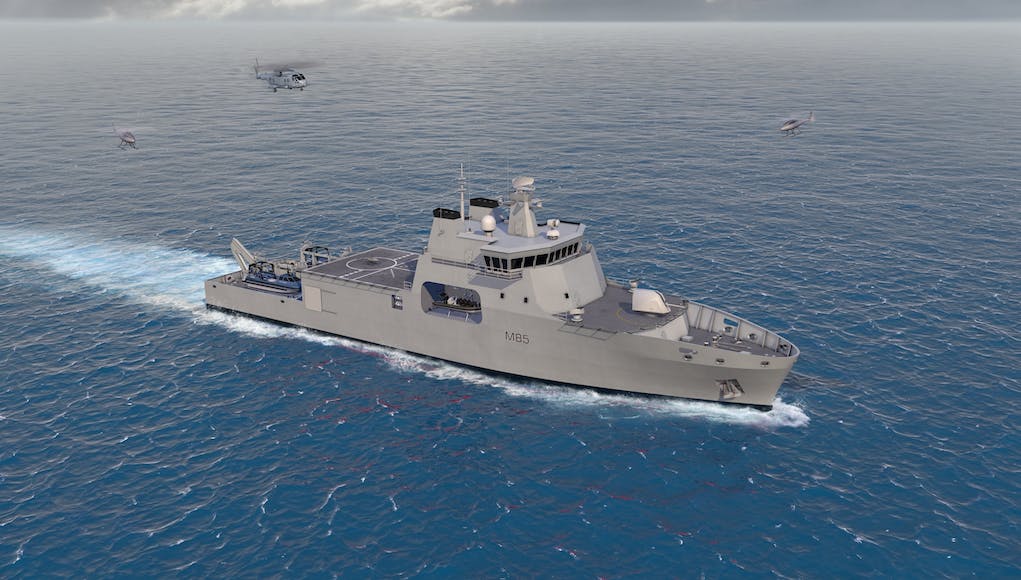 BMT has launched VENARI-85, a new mine countermeasure (MCM) concept design capable of clearing mines over a greater area and with less risk to the crew.

The company say VENARI-85 offers a flexible platform that is capable of a spectrum of roles which is future-proofed and able to evolve as technology advances in the unmanned and offboard systems markets take shape.

Combining BMT’s ship design pedigree with QinetiQ’s integration expertise, and drawing upon the experience of mine warfare operators from several different navies and system suppliers, VENARI-85 has been specifically designed and configured to exploit the next generation of offboard vehicles, mission systems and operational concepts.

“VENARI-85 represents a huge step change in the way MCM ship design is approached and developed.  Designing platforms with roles and future technology developments in mind seems the logical step but not one that’s often taken.

Before attempting to design such a platform, we invested significant time and effort in operational analysis to better understand how the vessel will be deployed now and in the future, to comprehend the missions and the equipment needed to conduct them.

Such an approach not only avoids compromise and repurposing costs in later years, it also maximises the ability to conduct effective MCM throughout life.”

Derived from the Latin meaning, ‘to hunt or chase’, the company say the VENARI-85 design is optimised for next generation warfare and hydrographic technology and can operate large numbers of air, surface and sub-surface unmanned vehicles.

“There are multiple nations currently considering their future mine warfare capability and with ongoing pressures on cost efficiencies, value for money while being able to safely perform the unique role of MCM is key.  Unmanned MCM technology is developing at a fast pace and vessels procured now should be designed with future evolution in mind.”

I think the RN is on the case. Wonder if you can launch and rcover one of these from the deck of a River 2?
https://www.atlas-elektronik.com/fileadmin/user_upload/documents/products/Mine_Warfare_Systems/ARCIMS_ModularUSV_System_online.pdf

The design looks excellent and if the money was there to have a large frigate fleet and a decent fleet of these then that would be great but there simply isn’t. I just feel this is a waste of precious resources, the type 31 should be made to accommodate all the OBS and UAV and act as the mother ship. We should be scrapping the MCM fleet and using the money and men for a larger frigate fleet so we have more numbers of proper warships. We are building OPV so not sure this design with a secondary patrol capability… Read more »

I agree. It’s happened so somewhat pointless speculation and BMT details are a bit sparse (Crew complement? Spare berths? Displacement? Speed? Range? Endurance?) but at 86m length at first glance this looks similar in size to the River Batch 2s and makes me think how much better these might have been as the next gen OPV. The catch is probably in some of my question-mark items but, again at first glance, it doesn’t seem to give up any River B2 capabilities, similar armaments and can land but not house a Wildcat, but adds that big rear deck for USV work… Read more »

Hi Julian, I thought the exact same thing, this is from their tech sheet.. “Offshore Patrol Vessels (OPVs) generally lack survivability and signature management features, even at the most basic level, and are fundamentally unsafe to be employed in mine clearance operations within the Channel Immune, Channel Avoid and Channel Standoff concepts. With a narrower beam, an OPV hullform also lacks the stability required to launch and recover large unmanned vehicles, some of which weigh upwards of 15 tonnes, in all sea-states and weather conditions that are required in the Area Standoff concept. These factors place acute limitations and delays… Read more »

The River 2’s have a 16 tonne crane. Perhaps the RN prioritised this over a hanger?
http://www.fleetairarmoa.org/news/flight-deck-for-new-river-class-patrol-ships

If they cut the foreign aid bill in half then there will be plenty of money to round.

I really don’t see the point of this for the RN. We desperately need escorts and for me more T26 and T31 that are capable of doing this would be a better use of money. We currently have 15 MCM which are in good/fair nick, Lets schedule 25 T31 to replace these and we have the start of something great. We should really use the same thinking with the small patrol vessels and go for Safeboat Mk6’s that can also do MCM if configured properly. I would rather see more escorts with the right Sonor (compact C4) and MCM suites… Read more »

Safeboat Mk6’s??
Absolutely not.
The cousins over the pond wanted 60 + of these things…now its down to a few 10s. They are expensive to buy and no one seems to know what to do with them. They have tried MCMV remote vehicles off them, diving support and Force protection. Only FP was worthwhile.
The best description I heard from an operator was its a Porsche Cayenne with all the optional extras when a jeep would have done the same job.

BMT seemed to be producing a range of designs that make BAE appear complacent and lazy. The govt should really consider their light frigate design. At the least it may shake in BAE.

Looks to me at 85m BMT are trying to squeeze a quart into a pint pot. Maybe something to stimulate debate or for a navy with more money to spend than the RN. A River 2 can lily pad Merlin, which means it can contribute to carrier group Crowsnest screening plus get inshore more easily than a frigate to land and recover marines when you get there. Also its large open deck can take a lot of easily loaded and unloaded containers for disaster relief when on Caribbean duties. Its 16 tonne crane will allow the RN to experiment with… Read more »

Do you work for BAe? River B2s are a child of a contractual obligation and not required.

Agreed, they can be a lot of use and could be used as the basis for replacing the MCM fleet in due course, if the off board solutions all work. Delete the aviation facilities and add a small stern ramp for a globally deployable and robust MCM solution. They have good survivability standards and decent accommodation.

This is an interesting vessel in that it raises many questions about the current capabilities of our Batch 2 River Class, future MCM replacement vessels and where roles of various vessels can be combined. I don’t think vessels should be combined for the sake of it but there are clearly many ways and examples that ship roles can be combined to increase efficiency and lower costs without significant reductions in capabilities. If the River Class Batch 2’s can *also* take on a mine / sub hunting role using, for example Atlas Arcims in a MCM role, then this should be… Read more »

Everyone so far is maki g one massive mistake, Any “HIGHER WAR FIGHTING CAPABILITY” is useless without sea room provided by MCMV’s while Drones UUVs etc are all good tools to an MCM effort especially covertly mapping possible landing sites etc there are times when there is no substitute for a specialised MCMV. Yes There are 4 MCMV’s currently in the Gulf and they are constantly gathering vital data, the UK is a world leader in MCM and for good reason, the MCM personel and thei ships are doing the job constantly and remain worked up in all environments and… Read more »