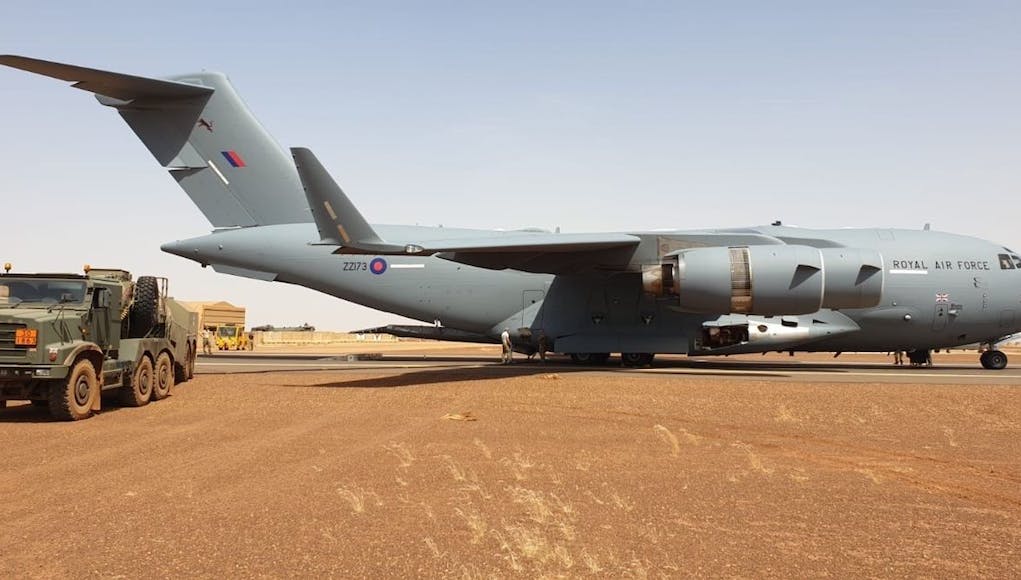 The deployment of Royal Air Force Chinooks began in 2018.

The Royal Air Force say that Joint Helicopter Command (JHC) planners have recently led the work to ensure that equipment, including a Chinook could be rotated to allow long term maintenance.

The complicated planning ensured a RAF C-17 Globemaster from RAF Brize Norton based 99 Squadron was able to conduct the changeover of Chinook airframes successfully.

“JHC personnel are also deployed in Mali at Gao Air base, to support 1310 Flight which is currently from C Flight 18 (B) Squadron RAF and their supporting ground crew. One of the JHC units that is supporting the operation is the Tactical Supply Wing (TSW). The four strong TSW detachment is a key enabling element for the deployment as they carry out the fuelling of helicopters and other aircraft as needed. To do this they also have to be able to maintain the equipment and conduct fuels quality assurance testing prior to any refuel to ensure that the fuel is fit for use. The detachment is equipped with a very large Oshkosh Tactical Aircraft Refueller tanker that can hold 15,000 litres of fuel. All of the detachment are qualified to operate the Oshkosh pumping compartment or to be on the hose end of refuels, connecting the hose to the aircraft and conducting the refuel.The fuel that is used is drawn from the main French fuel depot based at the airfield and then the detachment blend in additives that brings the fuel to UK military grade specifications.”

“The role of JHC has been critical to the success of the UK’s helicopter operations in the African Sahel region. The enablers that are deployed provide the critical mission support that is needed to conduct these operations successfully together with the support we receive from the Joint Helicopter Command Headquarters back in the UK.”

I’m glad we are able to assist them with air support. For everyone who criticises the French dependancy on it, I doubt we would be able to deploy our own troops to Mali for the length of time the French have without any support.
Their scorpion program with the Grifon, Jaguar and Serval vehicles being introduced is an example of how armoured procurement should be done.

We have to contend with the MOD and Treasury rules purchasing policy that wastes time and money in too many instances.

Correct mate. The French, contrary to what people may think, operate and think like us in a strategic context, they are just way above us on procurment. Always enjoyed working with the French.

What a weird world we live in
Helping the French fight an a colonial war when we have people in this country moaning about our own colonial past and how we supposedly raped some of our former colonies
And at the same time the French are threatening to block a deal with the EU over fish dispite us helping them out
Weird or what ?

What is weird about it? We have done all sorts of things politically to the French too and yet they helped us out a great deal during the Falklands… Being friendly on a military standpoint does not mean political arguments can not cause issues domestically.

We also did absolutely do bad things in some of our colonies there is no supposedly about it. The French action is against terrorists and they were called in to help out by the Malian Government… It is in our interests that the French operation succeeds.

We also supplied them with bombs that sunk our ships!

They also did everything in their power to prevent any other Exocets getting to Argentina, helped us train against Super Etendards and Mirages, Helped us understand the limitations of Exocet so we could try to prevent it striking the ships and they removed all but a handful of personnel that were integrating the Exocets with the aircraft. The ones they left behind in Argentina then acted as spies and were handing over all they could gather to the British… Remember we were very close to selling Argentina Harriers which would have sailed on the Ex-British Aircraft carrier which was escorted… Read more »

Countering the spread of Islamic-fascism isn’t “fighting a colonial war”.

I am not sure how you believe this to be a colonial war? The previous pre-coup Malian Government invited (begged) France to help them in 2013 to recover lost land in the North and East from Islamic insurgents and stem the country’s conversion to a fundamental state. This led to the UN mission Mulidimensional Integrated Stabilzation Mission in Mali (MINUSMA), there are around 55 countries involved in the UN mission. A separate mission that comes under the wing of the UN mission is Operation Barkhane. This includes France, Burkina Faso, Chad, Mauritania, Niger and Mali. However the operation is not… Read more »

Wow
That shut me up didnt it