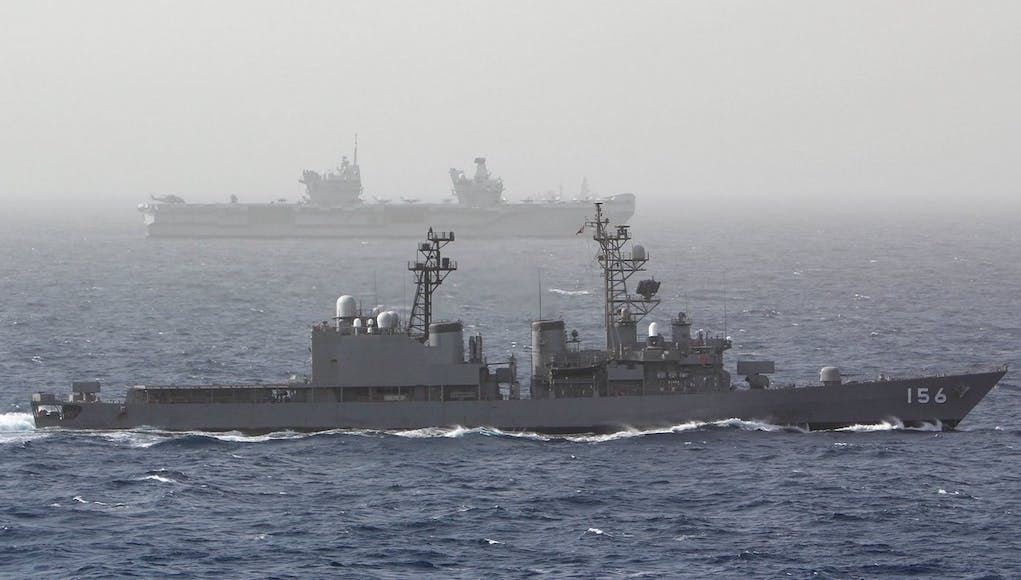 HMS Queen Elizabeth’s Carrier Strike Group has exercised with a Japanese warship in the Gulf of Aden.

The UK Carrier Strike Group exercised with the Japanese destroyer Setogiri in the Gulf of Aden. The rule of law at sea is paramount to our shared security & prosperity. We look forward to working with the Japan Maritime Self Defence Force in the Indo-Pacific.”

The UK Carrier Strike Group exercised with the Japanese destroyer Setogiri in the Gulf of Aden.

The rule of law at sea is paramount to our shared security & prosperity.

We look forward to working with the Japan Maritime Self Defence Force in the Indo-Pacific  #CSG21 🇬🇧🇯🇵 pic.twitter.com/Eah81AZRm4

HMS Queen Elizabeth is the deployed flag ship for Carrier Strike Group 21 (CSG21), a deployment that will see the ship and her escorts sail to the Asia-Pacific and back. The Carrier Strike Group includes ships from the United States Navy, the Dutch Navy, and Marines from the US Marine Corps as well as air assets from 617 Sqn, 820 NAS, 815 NAS and 845 NAS.

Not pictured above is the Astute class submarine sailing with the group.

CSG21 will see the carrier along with her Strike Group work with over 40 countries from around the world. The Strike Group will operate and exercise with other countries Navies and Air Forces during the 7 month deployment.

Recently, the Strike Group joined coalition operations in the Eastern Mediterranean; an historic milestone as British and American F-35B strike fighters flew the first operational missions from a Queen Elizabeth-class carrier, as they stood ready to strike at Daesh.

“The Carrier Strike Group’s period working with our NATO partners in the Atlantic, Mediterranean and Black Seas offers unmistakable proof that the United Kingdom’s most important overseas defence commitment remains the security of the Euro-Atlantic region. While HMS Queen Elizabeth launched counter-Daesh missions over Iraq and Syria from the Eastern Mediterranean, HMS Defender and HNLMS Evertsen were conducting concurrent operations 1600 miles away in the Black Sea – true strategic reach.

Meanwhile, our programme of defence engagement involved a huge amount of work in support of British Embassies and High Commissions, but from Alicante to Alexandria and Bar to Batumi, the message was the same: Britain’s friends and allies are delighted to see the Royal Navy back in town. Now we head east, towards the rising economies of the Indo-Pacific. From the Strait of Gibraltar to the Strait of Malacca, CSG21 offers unprecedented influence and engagement in support of Global Britain.”

Interesting. Why is a JDF ship so far from home? Seems well out of its remit.

CTF 150 or CTF151.
I have seen JDF units alongside here quite a few times along with a fair few other nations vessels you don’t immediately think of as being in the ME theatre
.
Montrose has played with JDF units on exercises doing BOARDEX.

I believe the JDF still has facilities in Djibouti. They definitely have had a contigent there.

An old Kagero class DD would have been interesting

The Japanese get around, they also have a Destroyer here in Sydney exercising off the coast with Destroyers from the RAN, USN and RoKN.

Thats all very interesting, they are not confining themselves in the Sea of Japan. Which is good because the allies need to work together.

Japan is certainly not restricting itself to home waters.

For example late last year there was Exercise Malabar 2020 in the Indian Ocean with all four members of ‘The Quad’, eg, Australia, India, Japan and the USA.

It’s probably not the sort of news that would regularly be reported in the UK, but now with the QE carrier task group entering the Indian and Pacific Oceans this type of reporting will probably be more common.

Its doubly good because the Japanese escort fleet is one of the largest in the world. They havent allowed financial constraints and economic woes to cut their navy like the UK has.
+50 frigates and destroyers is an impressive force.

If they are modern effective canoes, that’ll give the Chicoms something to think about given, iirc, Japan has said it will defend Taiwan.

Yes. Japan has a belligerent neighbour so it needs its navy. Its defence budget is similar to ours… looks to be a bit less than ours

While China is building a huge fleet, Japan, S Korea & Taiwan combined on their door step pretty much match it & Australia plus the USN also active in the region.

They haven’t been confining themselves to their home waters for years now.

Hell, they sent Kaga to the Indian Ocean a few years ago.

Some pictures on social media suggest they have met up with the USS Ronald Reagan CSG as well?

I know Beauty is really subjective… but boy have Japanese ship designers got a history of making some really ugly ships.

You see, i would say the opposite. They tend to be very powerful and purposeful looking to me. Together with the Canadians, they were one of the first to ship two Sea King ASW helicopters in a frigate sized ship.

Fair point on the Sea Kings, but that doesn’t change the fact that hangar is an abonimantion XD

I imagine they are very capable but they are butt ugly. Function very much over form.

Old ships now, same generation and capabilites as the Type 22. Last ones completed in the early 1990s.

“Not pictured above is the Astute class submarine sailing with the group.”

All the ship silhouettes are shown to the waterline. So logically, the Astute is in the picture, but submerged. ﻿ 😉 ﻿

Everytime I visit this website which is daily it promts me to comment…. and i dont know why…. because I know f all about anything, so nothing I say has any value at all… anyway I visit daily, take from that what you will….

Just a head up to anyone interested. The Commons Public Accounts Ctte has been holding a session on MoD procurement this afternoon if any of you have problems with high blood pressure i’d advise you not to watch it.

After yesterdays match, I wont!

I think that exercises with foreign Navy Forces are a must for Carrier Strike Groups’ raison d’ étre itself besides being a real show of force and a no nonsense deterrent to third parties who might think that brinkmanship is a savvy idea. Well done to all involved!

Love to see the nations getting on. Makes a change in this strange world.

Nice to see the JN flexing some muscle. They have a lot of very capable ships and from all I’ve read are a very professional navy that are taking their own defense very seriously.

The JDF ship Setogiri have just come alongside here at the military berths this morning. Just driven past it. Looks like a Spruance did so its hardly state of the art.. Looks in good nick though. Very dark grey paint and no rust anywhere. .