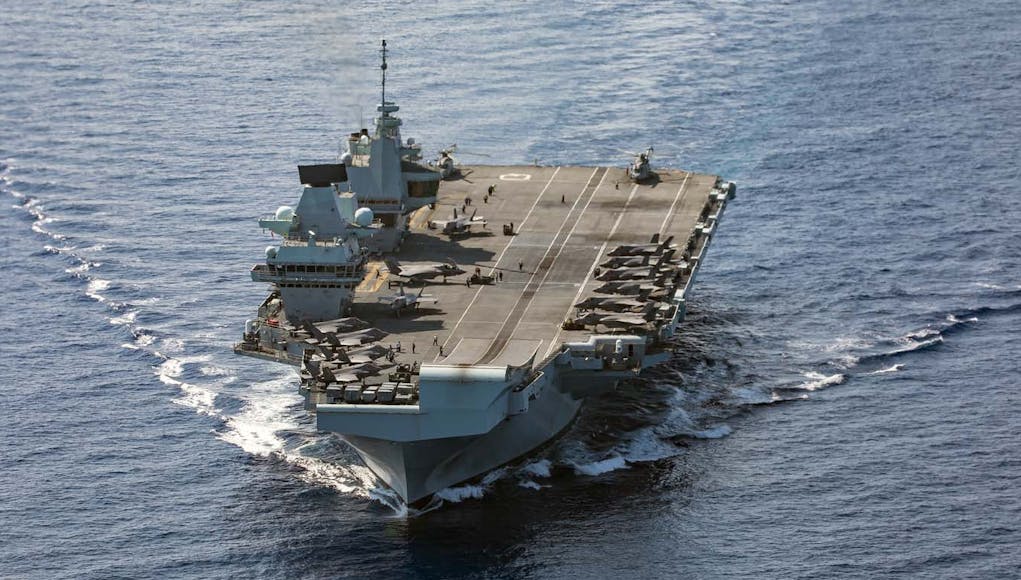 HMS Queen Elizabeth and her Carrier Strike Group have arrived in Guam.

The United Kingdom Carrier Strike Group arrives in #Guam – another important milestone for #CSG21 and an opportunity to reset ahead of the next phase in the Western Pacific.
🇬🇧🇺🇸🇳🇱 pic.twitter.com/eIpyETFX0m

HMS Queen Elizabeth is the deployed flag ship for Carrier Strike Group 21 (CSG21), a deployment that will see the ship and her escorts sail to the Asia-Pacific and back. The Carrier Strike Group includes ships from the United States Navy, the Dutch Navy, and Marines from the US Marine Corps as well as air assets from 617 Sqn, 820 NAS, 815 NAS and 845 NAS.

Guam doesn’t have any covid restrictions anymore, so this could be the first real shore leave/port call for most of these sailors.

Is there any sort of extra curricular activities on Guam for the sailors to enjoy? Other than the bar the MPs may be a little busy.

If other deployments are anything to go by where a large US Base is involved most wont get past the MWR or the NEX Store and in a few days time the US Service personnel will be dripping that the Brits bought everything up and there is nothing left until the next supply ship in 6 weeks!

When you can buy 501s for 25 USD , Timberland boots for 50 USD and iPads etc for half of what they cost in the UK stuff disappears quickly!

I guess the US got in on the Colonial craze!

Has the SCS FOP happened then? If so how did it go?

Simple is yes and we don’t know 🙂

MoD has a policy of, ‘what happens in the SCS stays in the SCS’. This is a sensible de-escalation policy allowing everyone to stay quietly polite and professional. Of course, if anything significant did happen then it would get out, staying quiet means that non-events stay non-events afterwards.

China’s ambassador made some factually incorrect claims and assertions a few days ago, but that was it really.

Went off without any major incidents which is all good.

Wonder if the BBC will do much on that part of the journey when the documentary comes out.

Hi James, I would of thought so. I expect that the Chinese sent at least one ship to close shadow the CSG as it passed through the SCS, that is not something that the BBC or MoD would overlook. I would expect the commentary to be very ‘balanced’ and factual from our point of view nothing too inflamatory. Remember the MoD was pretty good at using the BBC pictures and commentary to rebuff wild Russian claims in about HMS Duncan in the Black Sea (accepting it took a few hours to get the pictures off the ship and on the… Read more »

Just checked, nothing. So I guess something a bit more complicated than we at first hoped broke or it may simply be that it is something unusual that broke and they are having to wait for a replacement to be manufactured. The latter situation is rare, but does occasionally happen in any engineering field.

Hopefully, she will not need to return to the UK.

Cheers..lol…maybe she’ll join them for sail back through the Med on return leg….

Thanks CR. I wondered after all the high profile build up it had gone quiet.

The group way we’ll be back in the area on the return leg of the trip.

Chinese media boasted about how the British carrier strike group got scared away by repeating what it did in Crimea and avoided the Chinese artificial Islands .

I really expected myself for the UK to do what the US does and enter that zone, this clearly is backtracking from what happen in Crimea last time

Didn’t one of the T45s do a closer SCS track prior to the main group?

Also here is the actual path with OSINT from satellites tracking where the group went and right down the middle of SCS. SCS Probing Initiative on Twitter: “10,000 miles jouney of HMS Queen Elizabeth Carrier Strike Group, up to August 1. Images credit to @lobsterlarryliu via @planet https://t.co/N9OkfPEMyJ” / Twitter Somewhat warrying that you can do this with public data sources (most free from ESA, probably with UK caemras ﻿ 😀 ﻿) expect military ones can be even better resolution with more frequent passes in target zones. I presume if proverbial hits the fan all manner of “blinding” techniques are… Read more »

The Russians said something similar ! We’ll have to wait and see when the BBC start advertising their series.

Better check RT and fox for the real story 😅

Need to get back to the dover straits,pronto

Good on the Brits

This is great news. Away from China, and no provocation.I am so pleased. From here she can head North to Japan. After Brexit it is trade we need most of all, and China would be a great trading partner. People want jobs.

I was a kid in Guam during the 70’s when my father was stationed there in the USAF as a B-52/KC-135 technician. A RAF Vulcan bomber would visit during the annual airshow on Anderson AFB. I thought the Vulcan was so diffferent and cool having grown up around USAF aircraft. Not sure if it came from a home base in the UK or was deployed somewhere in Asia/Pac.
I also remember the Japanese honeymooners who would take pictures of me and my brother with our blonde hair when we visited town!

2 British carrier sailors charged: https://www.postguam.com/news/local/2-british-carrier-sailors-charged-released/article_fd471a66-fb3d-11eb-8650-87f8fcbad105.html
The kind of bad PR the MOD would have have hoped to avoid. Note that the ship is sailing in Friday, presumably not for South Korea now that the Pacific Future Forum has been postponed due to Covid. The deployment is becoming a nightmare for both the planners, and ship crew members hoping for some decent runs ashore in the exotic east.