The strike group is the largest and most powerful European-led maritime force in almost 20 years.

HMS Queen Elizabeth and her Carrier Strike Group are visiting Scotland to take part in a large scale military exercise before deploying to the Asia-Pacific region.

The Ministry of Defence say that HMS Queen Elizabeth’s Carrier Strike Group’s capabilities willbe tested during Exercise ‘Strike Warrior’, which will take place off the coast of Scotland in May.

You can read more about the Asia-Pacific deployment by clicking here.

The Ministry of Defence say that in addition to British and American F-35B jets, the deployment is expected to include two Type 45 Destroyers, two Type 23 Frigates, two Royal Fleet Auxiliary logistics vessels and a submarine in addition to an American destroyer and Dutch frigate. A British submarine will also be present. 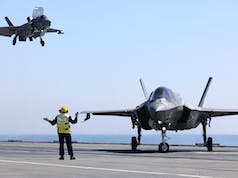 That cover photo is still my favourite picture of her!

Agree great shot Lusty but check out the one on her visit to Gibraltar some years back heading out of port taken by a brave photographer or one with a long lense!!

Aye, I know the one you mean. That’s a great pic given the heritage of the rock!

Will SNP members be able to see them?

No port calls mentioned so presumably not. Missed opportunity I would say….the fleet anchored in the Firth of Forth….might stiffen the sinews of those that are wavering!

That would be a sight. Bit of wavering starting I fancy.

Seen on wiki it say’s the ship need’s to be cert in the USA can’t it be done here, with the F35b that aren’t on the Queen Elizabeth?

26 APRIL 2021 I wonder how this is going to play out? Norcross of New Jersey, chairman of the House Armed Services Committee’s (HASC’s) tactical air and land forces subcommittee, said during a House hearing that providing 97 additional F-35s, more than was requested since FY 2015, has created a sustainment issue for parts. Although the subcommittee has been supportive of the F-35 programme in the past, Norcross said financial resources are limited, and he would not support any request for additional aircraft given affordability concerns with the programme. Garamendi of California, the HASC readiness subcommittee chairman, said neither to… Read more »

Wow Nigel slagging off the f-35 again. What a surprise.

Pretty much as the title of the piece and the article says probably.

Congress has been in the habit of increasing the number of F-35 ordered, beyond those submitted in budgets by the Pentagon, to the tune of 97 extra aircraft to date since FY2015. These politicians are indicating they won’t support similar increases going forward while operating costs in particular are where they are. It doesn’t mean the base line purchases in the program would be affected.

What concerned me most of all was the article below and in particular one sentence. “A reckoning for the F-35 programme is coming, Garamendi says.” With talk of a possible F36 replacement on the cards for their ageing F16 fleet and confirmation of the first flight of their next-gen aircraft, It really doesn’t sound promising for the F35 in my opinion. “The development is certain to shock the defense community, which last saw the first flight of an experimental fighter during the battle for the Joint Strike Fighter contract 20 years ago. With the Air Force’s future fighter program still… Read more »

It makes you wonder what is actually happening behind closed doors?

Could US F-35 numbers be reduced from current commitments? Sure, for a number of reasons, including the very likely increase in use of unmanned combat platforms to complement manned aircraft. However, we should not lose sight of the fundamental advantages that the F-35 platform brings, either alone or in combination with 4/4.5 gen aircraft or unmanned platforms. Which is why the program is here to stay. F-35 is currently a unique capability going well beyond just radar stealth and unlikely to be matched or exceeded until either an F-22 gen 6 replacement, Tempest or the French-German FCAS eventuate. I am… Read more »

I take your point, but what was written on the can will not be found inside the box for at least another seven years. Just look at ALIS for example changed to ODIN to fix the problem and it’s still a nightmare that has now been delayed. Block 4 currently pushed back until 2026 plus a host of other deficiencies still to be fixed. In 2020 only two were solved. After 20 years of development and trillions being thrown at it, I think things are finally coming to a head. It was originally designed to fill a capability gap between… Read more »

Nigel I know you seem to be on a personal mission to demonstrate how useless F-35 is but I suggest you spare us the wall of text next time. We know the program has issues, as pretty much every other military aircraft has had. The F-35 may appear worse, may actually be much worse, but it is also a hugely more complex and capable aircraft, even as it exists today. The USAF/USN/USMC are also likely to get capabilities including additional weapons support from Block 4 earlier than those for the UK. I’ll take issue with a couple of your points… Read more »

Apologies for the wall of text, I was simply pointing out part of the problem and where we can expect to be six years from now if all goes to plan. In relation to taxpayers money, we paid for our F-35’s and are expected to share some of the burdens from increasing costs I believe? or, cut the numbers? “The clear implication here is that while Block 4 has been a factor in the U.K. government’s budgeting around the F-35, that doesn’t mean that it plans to upgrade all 48 of the jets it expects to receive. Quin also declined… Read more »

I am not ignoring the cost to UK taxpayers, or the delays. But your original point was questioning the effect the pronouncements of US politicians would have, and in that context its US taxpayers, or more relevantly the views of their congress representatives that matter with respect to the F-35 program.

Is the writing starting to appear on the wall? 22 April 2021 “US lawmakers slam F-35 programme for sustainment problems “I’m [going to] take a deep breath and try to contain my anger at what is going on here,” said John Garamendi, chairman of the House Armed Services Subcommittee on Readiness. “The programme is over budget. It fails to deliver on promised capabilities. And, its mission capability rates do not even begin to meet the service’s thresholds.” Garamendi and Donald Norcross, chairman of the House Armed Services Subcommittee on Tactical Air and Land Forces, were especially incensed with P&W F135 engine problems that… Read more »

British Carrier Strike Group heading to Scotland next Month. Arriving on May 6th to monitor the Election?? 🙂

Just a thought – does anyone know if her 30mm canons have been fitted yet?

I did hear but cannot confirm that they are not getting them fitted. They will use phalanx in surface mode with the THIM for anti surface along with Martlett equipped Wildcats.

Hi Gunbuster – thank you for sharing. Omitting the 30mm cannons would seem short sighted – cost cutting? Can you confirm what THIM is? Thank you Gunbuster!