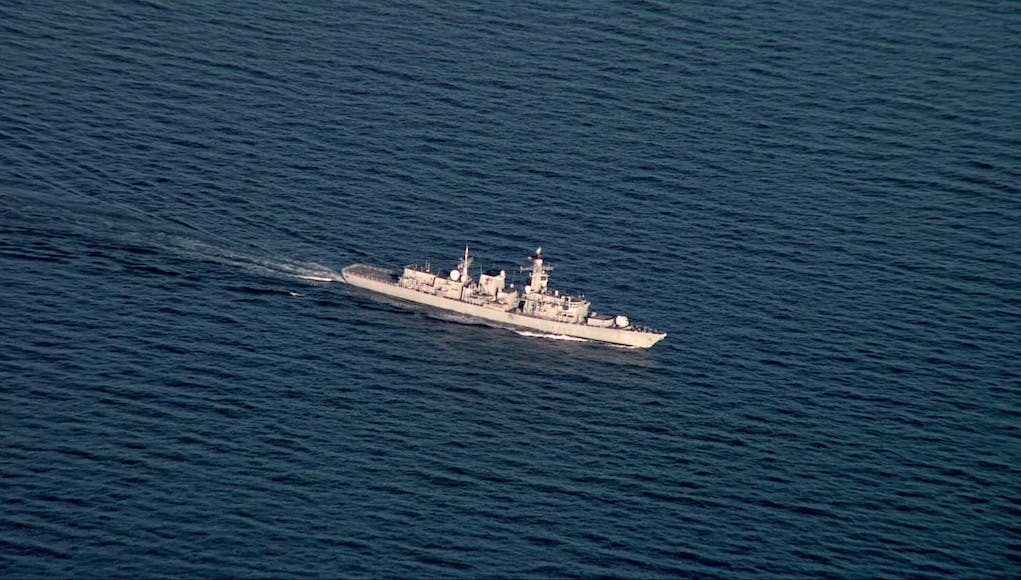 HMS Richmond has carried out patrols and escorted British supply ships alongside allies in the Baltic Sea.

The Royal Navy say here that the Type 23 frigate has spent the past few weeks in the region working with navies and personnel from NATO as well as those from the Joint Expeditionary Force (JEF).

“Her time in the Baltic gave Richmond’s ship’s company the chance to conduct exercises and operations with ships from Latvia, Poland, Estonia, Sweden, Denmark, France and the US. She joined her JEF partners in escorting Danish and British supply ships as they delivered military vehicles and equipment to re-supply the UK-led NATO Battlegroup in Estonia.

Troops from the UK and Denmark are serving side by side in the country with the UK recently doubling its number of boots on the ground in Estonia as part of wider NATO efforts to strengthen its eastern defences following Russia’s illegal and unprovoked invasion of Ukraine.

Richmond also worked with a Poseidon P8A submarine-hunting aircraft from the Royal Air Force. The Joint Expeditionary Force is a UK-led task group which is held at high-readiness to respond to global events. Regular exercises are carried out to ensure nations are ready to deal with emergencies from warfare to humanitarian missions.”

“Our short but intense period in the Baltic Sea has seen Richmond integrate with a number of Joint Expeditionary Force nations. I have been highly impressed with the adaptability and professionalism of the ship’s company.”

The Baltic states are fortunate that unlike the Black Sea there is not an international treaty which limits NATOs ability to sustain their independence.
Ukraine should be so lucky. At some point the Russian blockade of Odessa will need to be lifted.

Do you think the UK and NATO should honour it’s international agreements with Russia in light of current events ?

No way. I’ve been watching life at sea and would make two comments when Northumberland was hit by the Russian sub the captain showed poor judgement. He should have sunk it ! Later the spy plane should have been shot down. Sorry Captain just poor judgement all round.

But we could use our airpower to keep the Black sea fleet from attacking Ukraine or Russian armour from advancing in the south. To Putin everything & anything opposing him is an escalation. We’re mad to fall for it & leave Ukraine to be devastated.

It seems the Ukrainians are able to take care of themselves….
https://www.reuters.com/world/europe/russia-says-flagship-black-sea-fleet-badly-damaged-by-blast-2022-04-14/
Neptun missiles 1 Moskva 0. 😉

I have been watching https://www.channel5.com/show/warship-life-at-sea it makes me realise what an excellent job the RN does, and how good the Type 23s are.

Last edited 2 days ago by Bringer of Facts
Reply

Michael
Reply to  Bringer of Facts

The small point of solace after two decades of naval neglect by British governments is that, although we’ve kept the T23s in service far longer than they were designed for and cut their numbers to the point each hull is stressed to the max, they are very good ships that responded to the challenge. It would be a fearful thought to have to rely on the noisy T22s for so long

Yes, I totally agree that cutting T23 numbers when the T22 were still in service was not sensible.

Neither was withdrawing T22 early so increasing the work load on T23.

BTW T22 were very good in other ways and whilst they were ASW capable had a much more rounded capability particularly the B3 T22.

Got to agree there mate, personally thought the B3 T22s were mustard, by far the best surface combatant we have had in a while. Shame they got cut so early on.

The Navy say continually that they need at least 24 escorts to do their jobs properly without relying on forwards-deployed OPVs. If we’d kept the T22 b3s (good, rounded ships, I agree, if too noisy for ASW work), and if we hadn’t sold off 3 Type 23s for no reason, we probably never would have fallen below those numbers, even in the 2030s and even with the glacial pace of T26 construction. The extra breathing room would have allowed the T23s to stay in service just a little longer to make up the difference. And, of course, we might have… Read more »

There’s a debate about what Russia might decide to do between Finland and Sweden applying for NATO membership and them being accepted. That’s where JEF really matters.

Agreed, with Poop Tin now gobbing off about Finland, we need to be looking North in the future! But let’s hope Poopy Tin has clocked on that he has made a serious error of judgment in Ukraine, and any move against Finland or Sweden would be even worse mate.

The Swedes and the Finns are very professional soldiers with some good kit and they will be highly motivated. Most of the population have done some form of reserve training and a lot of the population are good shots as well as being well educated and disciplined. When I was in Sweden 20 years ago most people did an annual stint of forces reserve training. This was, I think, scaled back but I am not sure by how much. At the very least if Mad Vlad was messing around in the area we would be ‘doing a joint exercise’ Trying… Read more »

Different ball game. Scandic Air would knock seven bells out of Russian Air Forces. Russian armour would not get anywhere near.

Poo Tin needs his bluff calling, he and his military are full of shoite.

Well, I believe they are looking for their parliaments to agree on membership within weeks, rather than years. I can imagine that NATO would also want to fast-track their membership. So old Poop Tin would have to get his skates on to mount anything against them in that time frame.

Finland has signed up to F35’s arguably they are in a club if not NATO.
Any massing of equipment on the russian side must be seen as a prelude to attack.

Agree Simon. We shouldnt ever fall for the “its only an exercise” ploy by Putin/ Russia again. Not that UK/USA did fall for it. We were openly declaring to the whole world that Putin was going to attack 2 weeks before he did. It was just Macron and the EU that didnt believe our warnings. Any massing or threats vs Finland andSweden should be immediately met by immediate NATO acceptance, we can work on the precise details later but essentially your in. Then mass a credible defensive force in the Baltics and Poland. See what Russias shitty crap army wants… Read more »

While Sweden and Finland are (not yet) part of Nato bear in mind that the EU treaty actually includes a clause for mutual defense. It was never really tested fortunately, but this would certainly allow (or rather said oblige) the EU countries to support Sweden and Finland.

How is the cooperation between the JEF countries and other allies working, btw?

yeh but would we! an he would just chuck more aka MAD. If we can get Finland & Sweden to join then we need to start rearming Ukr with decent weapons so they can start pushing back. but to do it they need time to get the equipment and then train to a high skill level to be able to win. which is what are jokes in charge don’t seem to understand you can’t just order a new Army/Navy/Air force from Amazon prime for next day delivery

Well thats the point of the MAD doctrine, and why its failed in this instance- well not exactly failed but been found to be wanting. He had to both belive we would do it , and also care that we would do it. At the moment he most definately does not even believe we would do it, he implied , we folded , hes laughing all the way to Mariopol acting with relative impunity for the attrocities he is comitting. Therefore we now also have a game to ever again convince him that MAD is an option that he need… Read more »

There probably arn’t a few hundred thousand NATO troops wanting to be let off the leash to have a go, well, except the Poles, and at the moment, the Poles could probably dobit on their own. However, that brings me to another point. Could you dial down the anti EU bollocks? What do you mean by the EU? The President? The Council? The Parliament? The Commission? The individual Member States like Poland, Latvia, Finland, Sweden, Lithuania et al who had all been warning against a Russian invasion weeks beforehand. I guess when you’ve got your wank sock on it might… Read more »