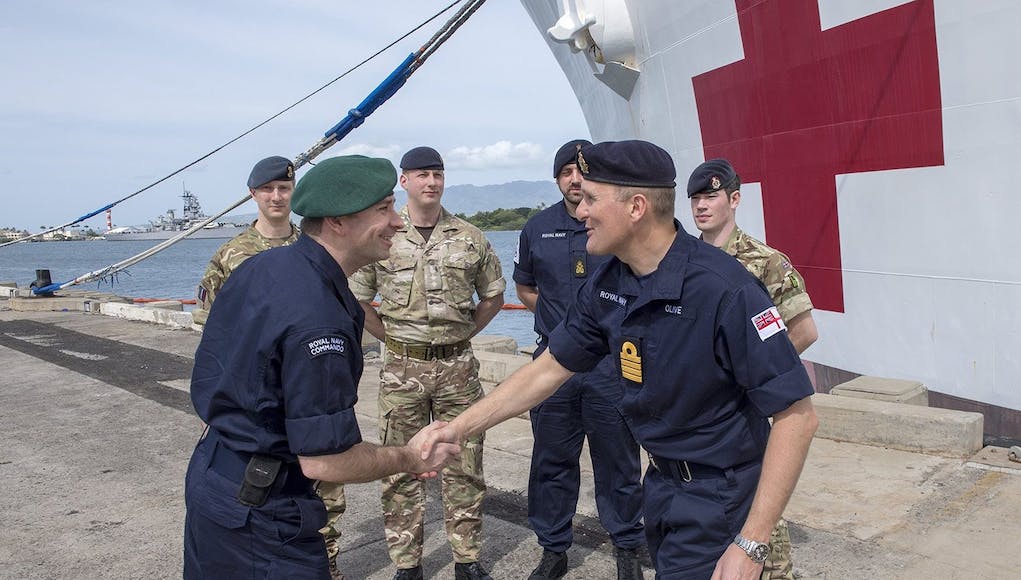 A team of British military medics have joined the USNS Mercy to deliver health care and aid to Asian and Pacific nations, say the Royal Navy.

“It’s only the second time Brits have taken part in the deployment. Back in 2016, five RN dental personnel spent five weeks treating the mouths of Vietnamese and inhabitants of the Republic of Palau. Two years down the line and not only is the UK involved in the mission, it’s in charge of half of it.

Peter Olive, who’s previously commanded frigate HMS Argyll and minehunter Ledbury, is the deputy commander of Pacific Partnership – the first time in its 13-year history that a Brit has been given the role. Captain Olive will take charge of the other ship assigned to the deployment, the fast-cat ferry USNS Fall River.”

The Mercy is a converted oil tanker, typically crewed by 70 civilian and military personnel – rising to nearly 1,300 souls on front-line operations. The vessel has beds for 1,000 patients – making her the fifth largest hospital in California with all the facilities you’d expect to find in a major city hospital.

“Our team has been drawn from across US defence, partner militaries and civilian agencies – they’re all great people who I am very honoured to be working with.”

That’s an impressive facility. Pretty much the same length and displacement as a QEC carrier, 12 operating theatres plus presumably all the diagnostic infrastructure to go with it, 80 ICU beds and a total patient capacity of 1,000. It’s impressive to see things done on this scale. The Wikipedia article on the ship makes mo mention (unless I missed it) of any MRI scanners. I assume that’s because an MRI scanner on a ship is a bit of a no-no due to all the metal around and the high magnetic fields involved and also I would think that for battlefield… Read more »

You can have MRI scanners in ships as long as (very) securely fastened in – in fact most MRI scanners are surrounded by steel / iron shells in order to ‘trap’ the periphery magnetic field inside the scanning room. For a ship and role like this, as you state an MRI scanner would be risky due to the metal potentially in patients – not just ferromagnetic materials, but any metal can have induced currents if it is moved through / experiences a changing magnetic field, and this can cause heating (and therefore burns) – as well as the projectile risk… Read more »

Many thanks for the informative answer. I just realised what an idiot I was re my first comment (surrounded by metal) since the first of two MRI scans I have ever had was actually in a portable scanner that was in what was essentially (probably literally) the back end of a trailer truck parked in the hospital car park so plenty of metal there. A very slick set up by the way.