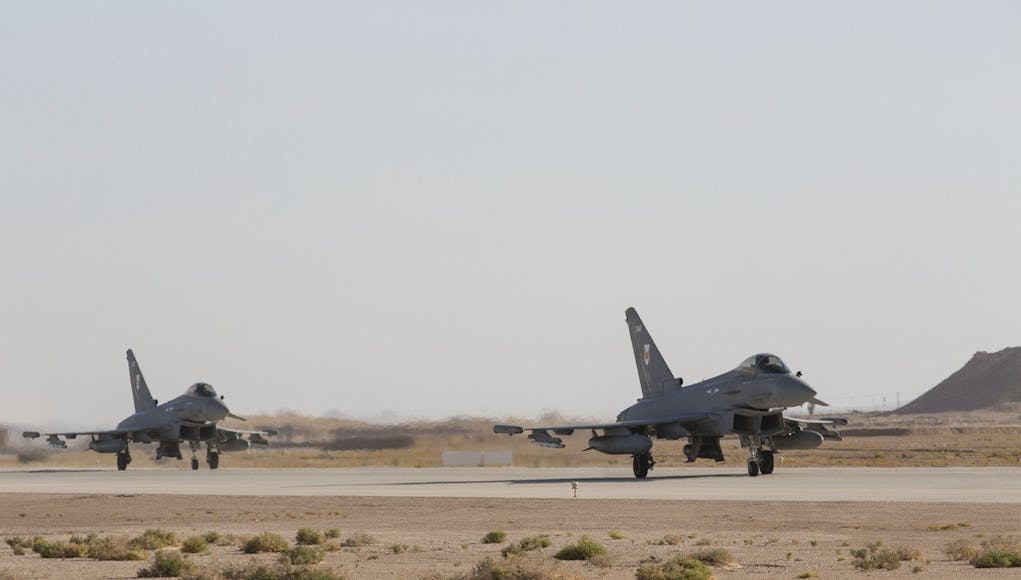 Typhoon jets have arrived in Oman to take part in exercise SAIF SAREEA 3, as part of 140 Expeditionary Air Wing.

According to the Ministry of Defence, four Typhoons arrived today from an overnight stop in Athens, to be followed by 4 more tomorrow. They are the first air component to arrive in Thumrait and will be followed by E-3D Sentry aircraft from RAF Waddington’s 8 Squadron.

A release states that the Typhoons will fly alongside the Royal Air Force of Oman’s F-16 aircraft during the largest tri-service, bilateral, interoperability exercise in the region for almost two decades.

Squadron Leader Bruce McConnell, a II(AC) Squadron pilot, has been in Oman for two weeks preparing for the aircraft’s arrival, he said:

“It’s great to see the jets here safely; the engineering team have done a great job getting eight jets ready for the transit flight. Now the aircraft are here we can start to focus on the exercise. Everyone is looking forward to working alongside the Omani pilots and seeing what their aircraft can do.”

Group Captain Radnall, Commanding Officer of 140 EAW, has overall command of the RAF contingent at Thumrait, from the Armoured Vehicles used by 1 Sqn RAF Regt, to the E-3D Sentry aircraft flown by 8 Squadron. He said in a release:

“We have had personnel on the ground for a while now, setting up the life-support in advance of the Force Elements arrival. With the Typhoons now here, there is a real buzz about the place. This exercise has been a huge challenge logistically, but with so many elements working together in such close proximity, there is a real opportunity to learn individually and collectively.

This is the third iteration of exercise SAIF SAREEA, the first being back in 1987. Together with the other UK armed services and our allies from the Sultan’s Armed Forces, we can exploit this proven formula to benefit us all and set us on a successful and collaborative path for years to come.”

The UK has more readily deployable armed forces than any other nation outside the superpowers. No doubt. A tribute to their professionalism.

That is never in doubt.

Being over committed with insufficient numbers is the problem.

Yup, The HAC are currently training in Japan. We are the first nation to have trained in Japan after the US:

Best of the Reserve units would you say farouk?

I’ve known some HAC blokes and they are very keen.

Very specialist role too for a reserve unit.

farouk, very encouraging this recent build up in engagement with the Japanese. Hopefully lots more to come

I totally agree, one of the many reasons our defence budget is high is because there’s always lots of things abroad that the British millitary is doing and we train many many nations permanently for free!. And we don’t spend what the government say we donon defence, They include all millitary pensions and other things in the budget and we would spend only 1.5% GDP if we didnt include them! we have cut so much of our millitary that we might be eroding our capabilitys far too thin!. And apart from USA the UK has one of the busiest military’s.… Read more »

Good news for global Britain, we have seeing a lot of activity over the past few months. Eight Thypoon and a Sentry does indicate to those that we still have commitments to work with allies, and have the assets to demonstrate to the world that our military is a serious formidable force.

Great to see some more exercises with the Omanis…But surely if the E3D fleet is falling apart, hench the E7 deal, there are now hardly any E3s defending the UK? Especially now the Sea Kings have been retired without a ready replacement. Does this mean we actually have a lot more E3s ‘available for duty’? Or is there going to be an enormous gap in our AEW coverage at home. And why is it that a Squadron Leader is just a pilot now instead of actually performing the role of Sqd Ldr. Bit like an air wing should be run… Read more »

The Sea kings have been replaced with Merlin’s . The E3’s are about to be replaced with Wedgetails. As for your other Concerns, Chill out mate.!

No the Crowsnest is not in service yet. The Merlin HM2 ASW replaced Sea King ASW a few years ago.
Other than the E3 the UK currently has no other AEW assets.

I highly doubt the Sentry force has aircraft assisting with the RAP for the UKASCS in peacetime! What would be the point when one if the several other RRH do the job.

We are not at war. Russian SU24s won’t be streaking across the North Sea at 50 feet.

As for fighters. QRA North and South between them probably have 4 aircraft on stand by. It’s no problem.

Ali at the end of your first comment you answered your own question. Plus Mr Wash why should anyone chill out about the obscenity of so many officers with their snouts in the trough at a time when HMG is contemplating cuts in Defence to save money.

“As for fighters. QRA North and South between them probably have 4 aircraft on stand by. It’s no problem”
I’m sure I watched a doc about QRA once and they had 12 a/c each to have 4 North 4 south 24hrs a day, I could be wrong about the numbers it was a while ago

I thought there were only 2 at readiness each area. May be you’re right and 2 more are available at longer readiness? I guess it’s withheld info.

That’s right Danielle, 2 to go immediately and 2 to replace those 2 in quick time. Obviously each time they launch, then 2 more need to be quickly generated. Both north and south.

On reflection that seems very sensible.

And news on the F35bs delivered to the RAF…they have not been flown for 34 consecutive days because of …personnel on leave!
So brand new jets no surprise on the arrival dates and the RAF welcomes them by not using them for over a month.
My guess is if they had been delivered to the FAA they’d be on the QE now either that or in the air over the West Country training in a similar vein and in partnership with the ITF.
What a waste.

Logs on the fighter control website will confirm that but I’m sure I’ve read of flights in the last couple of weeks. However, I do wonder how they reach IOC by end of December.

That does appear to be the case Ali! “Spotting outside RAF Marham, home of the UK’s stealth aircraft, on an ordinary day. On Tuesday Sept. 25 afternoon, The Aviationist’s contributor Alessandro Fucito went to RAF Marham, near the village of Marham in the English county of Norfolk, East Anglia, UK, to take some photographs of the first British F-35B STOVL (Short Take Off Vertical Landing) stealth jets based there. Whilst test pilots at the F-35 Integrated Test Force at NAS Patuxent River, Md. are involved in the first of two First of Class Flight Trials (Fixed Wing) phases, performing a… Read more »

Total waste the f 35s should be wilh the FAA the RAF should stick to the Typhoon.
Little empires and at what cost?
The carriers will be starved of airframes that will instead be collecting dust at Marham.
You don’t join the RAF to go to sea for months on end.

The RAF do need a stovl aircraft to support land forces in austere environments, but my thoughts are they should be separate from FAA in part. Could something like this work: 48 dedicated FAA (36 on the 2 carriers, 12 for training/ maintenance). RAF get 24 purely land attack with specific weaponry for taking out heavy armour. We then have a pool of say another 24 which are jointly operated and go where the need is greatest, either to surge both carriers in war time or with RAF for Any if their roles. Thoughts?

I agree, inter service rivalry means the RAF are likely to get the lion’s share of the F35B allocation and yet it is the Navy that will best utilise the aircraft for fleet air defence and strikeissions from our impressive QE class carriers.
The RAF should be gifted a further 48 Eurofighter Typhoons and let the FAA take responsibility for as many squadrons of F35Bs as possible.

I agree with Mr Bell. I have never understood why the French Navy and USN can operate their own fast jets yet the RN cannot. I would wish for the F35 to be a FAA asset. However. The FAA will have the next Squadron. 807 NAS. And the JFL will be jointly manned according to MoD. Nothing is going to change. RAF Marham will not suddenly become a RNAS with all the thousands of RAF personnel there switching service to the FAA. And we are not going to move the F35’s to St Mawgan, Yeovilton or other places I have… Read more »

I also agree with Mr Bell. The extra Typhoon order will help to keep the BAE lines open until Tempest comes along.
The 138 F35s will then be no nonsense FAA airframes.

Just an interjection for accuracy: the initial Saif Saree exercise was in 1986, not 87, likewise the first RN named squadron will be 809, not 807.

Oh! No well made.

So, I’m guessing by 2021/22 the system should be in a fit state to install on our carriers?

Interested to see it’s “inexpensive” surely a Typo on the part of the reporter ?, That’s an enormous Gaff when you think about It.

I would think so!

UK and Sweden to work together on future combat aircraft