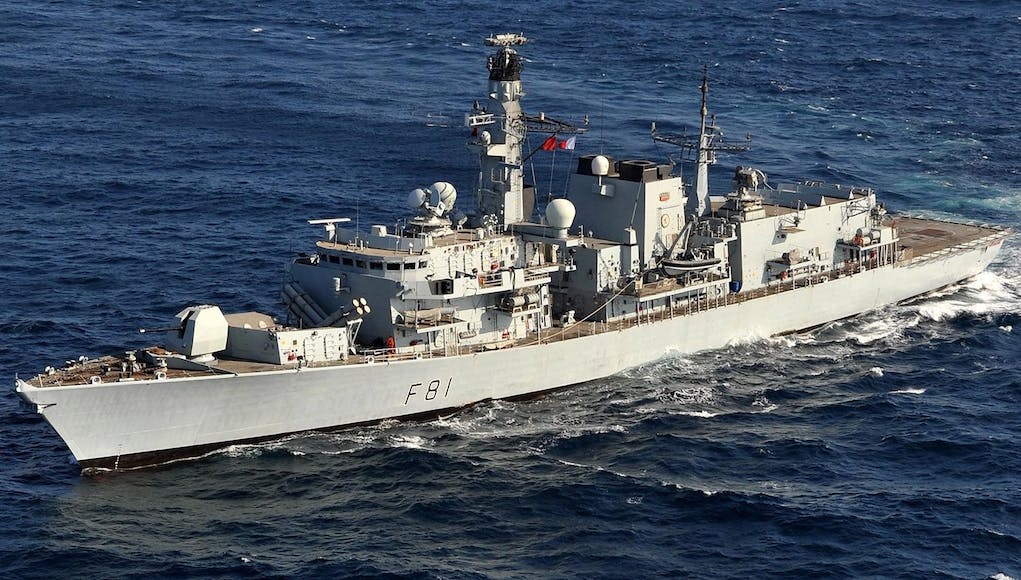 Defence Secretary Gavin Williamson said HMS Sutherland, a Type 23 anti-submarine frigate, would sail through the South China Sea on its way home from Australia ‘to assert freedom of navigation rights’.

“She’ll be sailing through the South China Sea and making it clear our Navy has a right to do that,” he told The Australian newspaper after a two-day visit to Sydney and Canberra.

This comes not long after Foreign Secretary Boris Johnson told Australian ministers that HMS Queen Elizabeth will conduct freedom of navigation patrols in the South China Sea region on her maiden deployment in 2021.

“We spoke about the challenges including in the South China Sea and we had a long discussion about the Pacific and the opportunities for deeper British engagement in our part of the world.”

Foreign Secretary Boris Johnson said in response to concerns raised regarding freedom of navigation in the South China Sea:

“One of the first things we will do with the two new colossal aircraft carriers that we have just built is send them on a freedom of navigation operation to this area, to vindicate our belief in the rules-based international system and in the freedom of navigation through those waterways which are absolutely vital for world trade.”

Britain recently deployed a squadron of Typhoon aircraft to conduct exercises with South Korea and Japan amid heightened tension in the region. According to local media, the ministers agreed to identify opportunities to conduct joint activities when the two countries have ships or other assets in the area at the same time. We reported recently that it had emerged that the UK plans to sail HMS Queen Elizabeth to the Pacific in 2021 amid concerns regarding freedom of navigation in the region.

HMS Queen Elizabeth will sail to the Pacific on her maiden deployment in 2020 according to an ambassador. Kim Darroch, Britain’s ambassador to the US said at a think-tank event in Washington:

“As we bring our two new aircraft carriers on-stream in 2020, and as we renew and update our defence forces, they will be seen in the Pacific. And we absolutely share the objective of this US administration, and the next one, to protect freedom of navigation and to keep sea routes and air routes open.”

Why are we trying to annoy China. We should stay out of this unless things escalate.

Fully agree with this. There’s a time to stand up to bullies, and given the nature of the Chinese system, I imagine that time will come sure enough one day down the line. But given how stretched our resources are now, and how drastically our standing in the world has changed, why are we doing this? Concentrate on higher priorities at home.

Because if we’re seen as withdrawing from global affairs, it’s going to damage our international standing at a time when we’re trying to secure our place in the world

But we obviously don’t have the resources to fully participate in global affairs – and every player knows it, something which won’t have escaped military leaders in FVEY allies. On current defence spending levels and diplomatic clout, what possible sway could we have re. the myriad of situations that don’t cross the to-do pile of the UNSC? And what if the next 10 years of economic growth mirrors what the past 10 years have been like? Leave it to the Americans and their Pacific allies. We are an irrelevance over there with respect to how the Chinese operate

Exactly. As Ross claims, our standing in the world has changed, apparently. Withdrawing from global affairs only accelerates that and leaves the UK not involved in world affairs. Which is everything the left wants with its ideology. Me, the UK is a P5 member on the UNSC and one of the worlds biggest economies, despite the “Little Britain” crap which many will have you believe. I have no problem AT ALL with the UK getting involved in world affairs if it is proportionate. If China wants to claim the South China Sea as its own the worlds navies should be… Read more »

Exactly Daniele, some people seem to be saying we are an irrelevance but the Chinese will be annoyed by us because we are sailing a ship through international waters.
Why would China be riled by the actions of a country they regard as irrelevance …?
A bit of internal logic lacking in that argument.

Totally agree. PLA Squadron transited the Channel and The Narrows last year, these happen to be UK and Danish territorial waters. OK by us because it was legal just as RN would be transiting the South China Sea. Testing the waters is sensible. Nothing to see.

china is not the big bad wolf it is now being claimed to be, there is no aggression between china and its neighbours., there is no reason to provoke other nations, simply because they have other politics or a desire to expand influence away from it borders, look at the rate india has expanded its armed forces, we’re not being negative or bothered about that. the armed forces of india dwarfs the u.k in all areas. india shows ambition, a clear plan and,investment. everything we do not.

Go read a book. China has invaded everyone one of its neighbours. Tibet, Vietnam, North Korea, India and note the South China Sea.

Andy China does bully its neighbours including Vietnam, The Phillipines and Japan. There political system is abhorrent and they are becoming stronger year by year. They use trade as a weapon and are prepared to be patient to get what they want. They will overtake the USA in the next three decades and the West is going to find itself faced with a problem it has not had in modern times. Our unchallenged control of the worlds oceans is coming to end and it will be a shock. With like minded allies we will need to show we will not… Read more »

Look I’m fully aware this is a complex issue and perhaps I’ve overstretched my argument a bit. But there are plenty of global affairs issues closer to home which we would be far better postured to address and which we’re currently struggling to meet at present, particularly on the RN side of things. I’ve seen a few comments from politicians recently which hint (real or perceived) at some sort of renewed interest in the Pacific. This sounds dangerously to me like yet another case of politicians asking more of the BAF without increasing the resources afforded to them. Regarding your… Read more »

Maybe we try and stop the Spanish harrassing the Gibraltarians before trying to go head to head with China or perhaps get the French to secure the damn border and arrest the violent “refugees” instead of simply releasing them without charge to try and illegally enter the UK again and again and again.

Yeah Steven lets pick fights with our closest NATO allies rather then sail a ship through international waters..
The logic just got even weirder…

Understood Ross no worries. I agree on the resource point completely.

An irrelevance with respect to changing their behaviour Jack. China will become as powerful as the US within our own lifetimes. Their GDP spend in nominal terms might not get to the point of matching the US, but that mismatch will be much reduced with respect to PPP. Moreover, the majority of their naval power will be concentrated on two seas. The power dynamics of UK-China relations is heading and will only head in one direction. We have other battles to fight, so to speak

If we are going to do these things sending one frigate for a sail through is a pointless waste of time that no one will notice or care about. If we’re serious we should have a frigate squadron in the Western Pacific at all times, probably based out of a joint facility in Northern Australia.

Go read a book. China has invaded everyone one of its neighbours. Tibet, Vietnam, North Korea, India and note the South China Sea.

Meanwhile Boris et al will be begging for Chinese money to hold or nuclear power stations.

China will reach its military potential come what may. Too many countries are now tied in to their economy and they are using this to boost their influence. Regarding sailing the South China sea etc, I for one don’t see a problem with this. We have a lot of social and economic ties with Australia, New Zealand and the Oceanic islands. We must be seen as maintaining our links and presence with our Commonwealth. Not only for trade but also because they bailed us out of the crap during WW2 with the amount of men and material they provided. It… Read more »

Fully agree with your first point. Secondly, there is no issue in principle with RN vessels conducting FON operations in the SCS. The problem is that we have very few surface combatants, or submarines for that matter, to cover tasks in the North Atlantic, which must be prioritised. Lastly, we can moan about “EU lovies” till the cows come home, but it’s clearly successive UK Governments of both stripes, and most notably the Government since 2010, who have cut the reach of the RN to its current standing. If anyone forgot about our Commonwealth commitments it was David Cameron.

More like every UK government since the cancellation of the original carrier program in the 60s. Followed by the ending of large scale operations East of Suez and the termination of British Far East Command soon after.

Post Brexit Britain will have to renew trade/cultural links with distant parts of the world and without being accused as an Imperialist, former colonies. Securing navigation and supporting allies away from cold war era and post 9-11 theatres will mean an enhanced RN. Whilst we don’t plan to antagonise China who will be an important trading ally. So, if we are to regularly send the RN to Asia, we must not do this by withdrawing from traditional commitments. Carribean guardship, Med presence, Gulf presence, and N Sea patrols should still remain as should any NATO commitments. This for me says… Read more »

The Royal Navy should always have priority funding in my view.

even more relevant as we leave EU