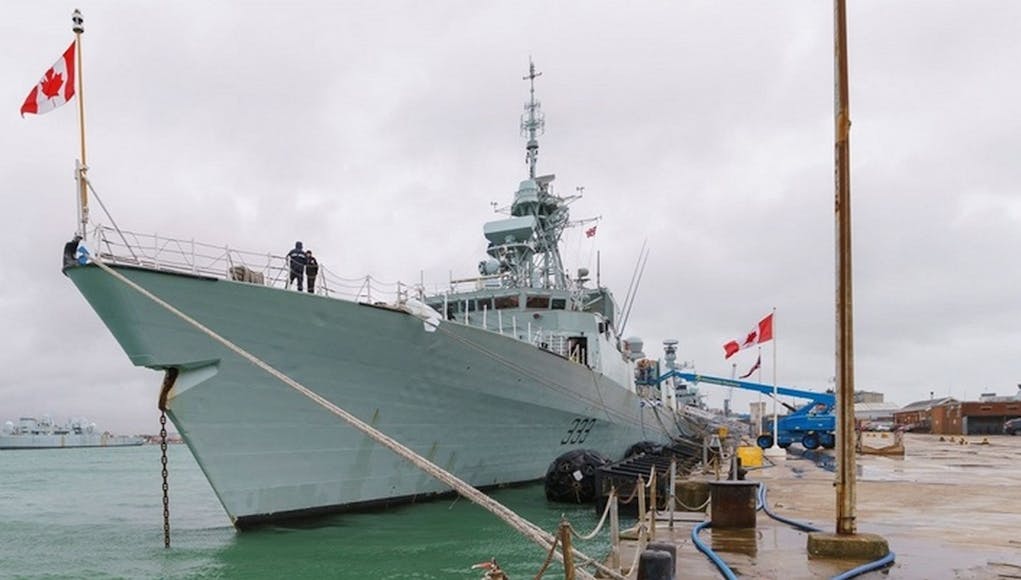 The work was undertaken at the home of the Royal Navy at Portsmouth Naval Base, UK.

BAE Systems readied the Halifax-class frigate for her next assignment by providing support to the ship’s crew on an emergent defect, assisted with some general maintenance activities, and assisted with refuelling and restocking the ship and her crew of 240 personnel.

“During this period, the ship’s company identified previously unknown minor maintenance issues and approached BAE Systems for their assistance to resolve them, as these were outside the original statement of work. The flexibility of the BAE Systems team enabled them to successfully rectify the issues in collaboration with the crew.”

“The support we provided to HMCS Toronto in Portsmouth demonstrates our ability to support allied nations navies with the capabilities we provide daily to the Royal Navy. Not only can we can deploy these services and expertise in the UK, but we can do so in locations around the world from the Middle East to the Caribbean, the South Atlantic, the Far East and North America.”

HMCS Toronto recently took part in the NATO group exercise Joint Warrior in October, alongside British aircraft carrier HMS Queen Elizabeth and as well as HMS Defender, HMS Diamond and HMS Kent, all of which are maintained and supported at Portsmouth Naval Base by BAE Systems.

HMCS Toronto was accompanied by two other Canadian Navy ships, HMCS Ville de Québec and HMCS Halifax, which also called at Portsmouth Naval Base briefly on their way to their next mission.

Big hole in the pointy end that needs welding!

Oh really Ian, come along now, lets use the correct terminology, the pointy end is called the front….

I think the whole thing is a cover and its actually our Canadian cousins standing by to help repel foreign minded Cod thieves…..

I “bow” to your superior knowledge! 🙂

On a subject near to my heart-it is nice to see the Canadian flag on the pointy bit again after some decades when the Canadian Navy flew the ensign there with the Jack on the stern, opposite to the tradition elsewhere in the Commonwealth where funnily enough we all fly the Jack on the, er, Jackstaff!! Also I see she is flying the UJ as a courtesy ensign. I think this is incorrect. She should be flying the white ensign in that spot. Some of you may/may not know that the USS Winston S. Churchill flys the British White Ensign… Read more »

I might add that the correct courtesy ensign for merchant and private vessels in British ports is the BritishRed Ensign and not the jack.
Three cheers for the Royal Canadian Navy!
Here endeth the lesson..

Absolutely, Geoff, the Canadians and Americans have been steadfast allies when needed.

Both Navies are always welcome to visit.

Bristol in the Background.

I will miss seeing Bristol when shes gone Captain, always lovely to see her when off to France on business.

I was lucky enough to Visit her back a while now…. Very large and Scary at the time, First and last of her type.

I think the T45’s are a similar size to Bristol, designed for same job effectively.

I guess from next year, the T45’s will be fully engaged in supporting Carrier movements and their maintenance periods will have to mirror the carriers. They will have to try and make sure 4 of the 6 are operational at all times soon.