Commodore Steve Moorhouse, Commander UK Carrier Strike Group, has said that jets flying from aircraft carrier HMS Queen Elizabeth are currently carrying out most of the missions to wipe out the remnants of Islamic State.

“At the moment, we’re taking on the lion’s share of that operation over Iraq, which is a fantastic, say, feather in our cap. But an achievement that ‘A’, we’re trusted and ‘B’, that we’re able to do that,” Moorhouse told reporters Sunday.

We earlier reported that the carrier was to take part in the fight against Islamic State.

“We’re rubbing up against Russian activity, not in a you know, in a dangerous or aggressive manner, but you’ve just got other people out here playing in what is a fixed piece of water and airspace. But there is a reality when you buy yourself a fifth-generation aircraft carrier and you take it around the world, people are interested in it.”

Captain James Blackmore said British and Russian pilots have come within “visual distance” of each other.

“It’s that cat-and-mouse posturing, it’s what we expect in this region of world. And as you can imagine, it’s the first time for F-35s into the eastern Mediterranean,” said Blackmore. 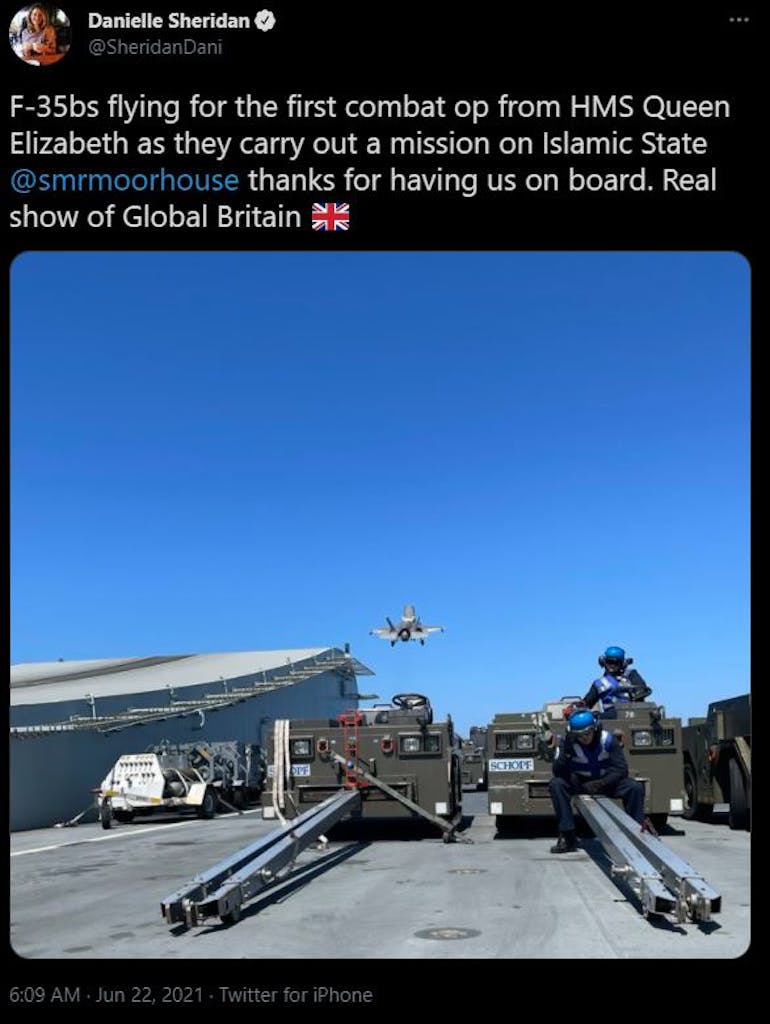 HMS Queen Elizabeth and her carrier strike group will remain in the eastern Mediterranean for two to three weeks before moving through the Suez Canal to contonbue with her deployment to the far east.

The Russians are probably baffled. An aircraft carrier ? Where are the tugboats and the plumes of black smoke from the funnel !

There was me thinking Israel had F35s…

Glass Half Full
Reply to  Sonik

… and we actually deployed our F-35Bs to Akrotiri previously too. Perhaps they really are invisible which is making them tough to keep track of 😉

Sonik
Reply to  Glass Half Full

Lol, just shows you can’t believe anything you read IMO! But we knew that already.

Pilots and crew training up. What’s not to like?

Are the marines flying combat ops or is it just UK planes?
Are they being treated as seperate squadrons or integrated?

Gareth
Reply to  andy a

Andy a
Reply to  Gareth

Cheers had missed that