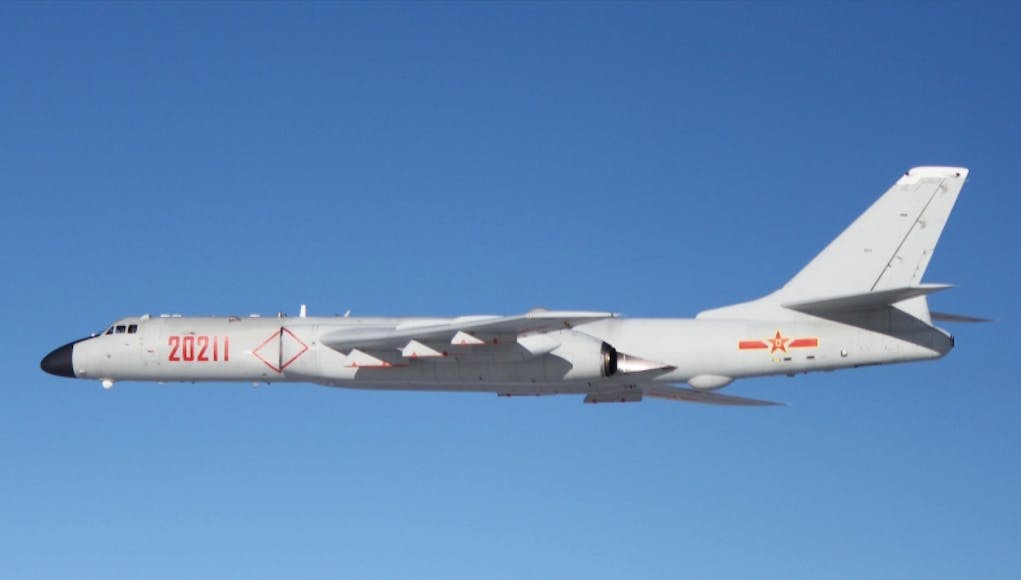 They set a new Chinese record for continuous flight time and range while flying over the sea, according to local media.

Delivery of the Tu-16 to China began in 1958, and the Xi’an Aircraft Industrial Corporation signed a license production agreement with the USSR to build the type in the late 1950s.

The first Chinese Tu-16, or “H-6” as it was designated in Chinese service, flew in 1959. Production was performed by the plant at Xian, with at least 150 built into the 1990s. China is estimated to currently operate around 120 of the aircraft.

The H-6K, first flying on 5 January 2007, entered service in October 2009 during the celebrations of the 60th anniversary of the People’s Republic of China and is claimed to make China the fourth country yo operate a strategic bomber after US, Russia and the United Kingdom.

With a reinforced structure making use of composite materials, enlarged engine inlets for Russian Soloviev D-30 turbofan engines giving a claimed combat radius of 3,500 kilometres and a glass cockpit with large size LCD multi-function display, the H-6K is a significantly more modern aircraft than earlier versions.

The bomb bay has been replaced by extra fuel capacity, and six underwing pylons for CJ-10A cruise missiles. The rear 23mm guns and gunner position are replaced by electronic components.

Do you think something like this would realistically survive against modern air defences?

They carry long range Cruise missiles so i guess their employment would be firing missiles outside of a defenders MEZ.

The loneliness of the long distance Badger….

Why? Tornado GR4 and Typhoon FGR.4s are much more efficient and effective whilst being a smaller target and more useful.

Whilst that is true within their limitations, neither of those can bomb Moscow from the UK.

…and certainly not Beijing.

He must mean at an historic air show

I’d like the UK to invest in tech such as jamming technology, counter intelligence & surveillance.

You can’t bomb what you can’t see.

We were weely weely wost…..

Most expensive Chinese delivery ever.

Training sortie not a real mission.

Wouldn’t look so scary with an aim 9 up its arse. .

Do not mock this a/c – it is younger than B52s! Its function is to deliver stand-off cruise misslies, and it seems very suitable for that.

Yes, It represents a nice capability its the kind of evolution they should be doing and seem to be doing very well. Hats off to them.

Thats one hell of an upgrade programme the chinese have.

We come in peace…