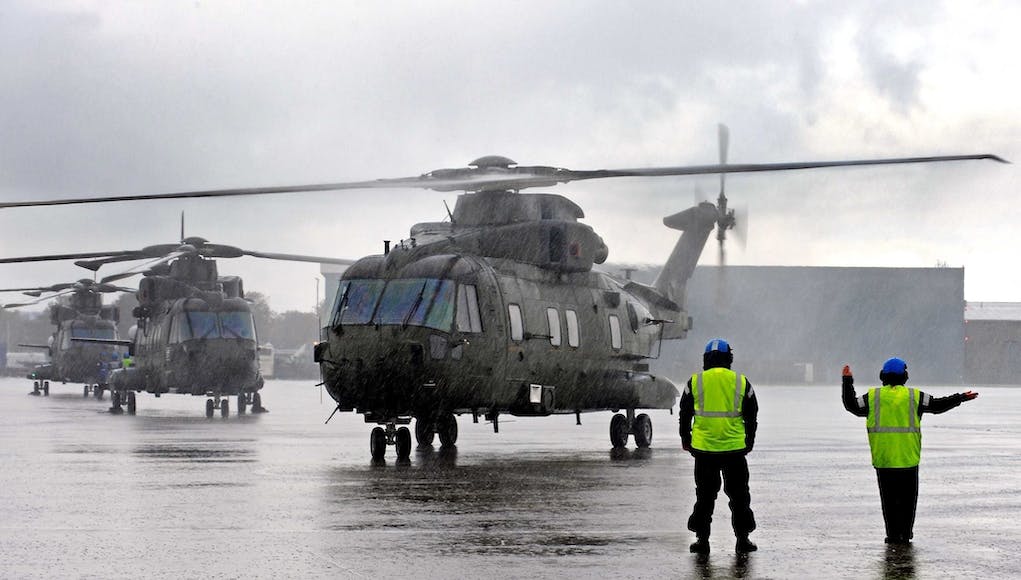 The CHF are the wings of the Royal Marines, providing crucial aerial support to the green berets be they at sea in an assault ship or in the sands of the desert.

The ‘iMk3’ has undergone a series of marinisation modifications to enable operation from RN and RFA ships, these include; folding main rotor head, strengthened undercarriage and communications upgrades and provide an interim maritime capable Merlin prior to the full upgrade to HC4 standard.

The upgrade to HC4 will see a folding main rotor head will be fitted and the aircraft will also be given strengthened landing gear, deck lashing mounting points and a new fast-roping point. In the cockpit, the aircraft will be refitted with the avionics suite used in the update of the Royal Navy’s current fleet of Merlin helicopters used for anti-submarine and anti-surface warfare. The programme will also include obsolescence updates to improve maintainability and reliability.

“This is a key milestone in the overall MLSP programme and represents the culmination of over 20 months work. Although the aircraft looks little different to the current Merlin Mk3, it brings with it a significant capability increase.”

AgustaWestland was awarded a £330 million contract to upgrade the Merlin fleet. £120 million will be spent on associated training, trials and infrastructure.

Under the MLSP contract awarded to AgustaWestland, additional ‘iMk3s’ will be delivered to CHF to meet Initial Operating Capability in time for when the Sea King retires from service. From late 2017, 25 fully upgraded Merlin Mk4 aircraft will start delivery to CHF.

Very sad to see the demise of RAF Search and Rescue Force, we’ll miss you guys!

This thread is about RM merlins???? Why are you talking about RAF SAR???

Just showing my respect and maybe, because had RAF SAR remained, they may well have been using these. Don’t you respect the work they did then Mr Hunt?

Well they wouldn’t because the down wash on a merlin was too great for SAR. I think they did a great job but it’s time this civilian role was handed to the coast guard.

I agree with Russ … very off topic.

Looking forward to seeing these fly from Ocean ?

I agree that Mr Hatton went off topic but I must point out that Mr Hunt is wrong: the AW101 is used by several forces in the SAR role where it has provided incredible capability, especially in long-range operations. Canada and Portugal are two prime examples. Yes techniques had to few modified but that goes for many new platforms going into established roles.