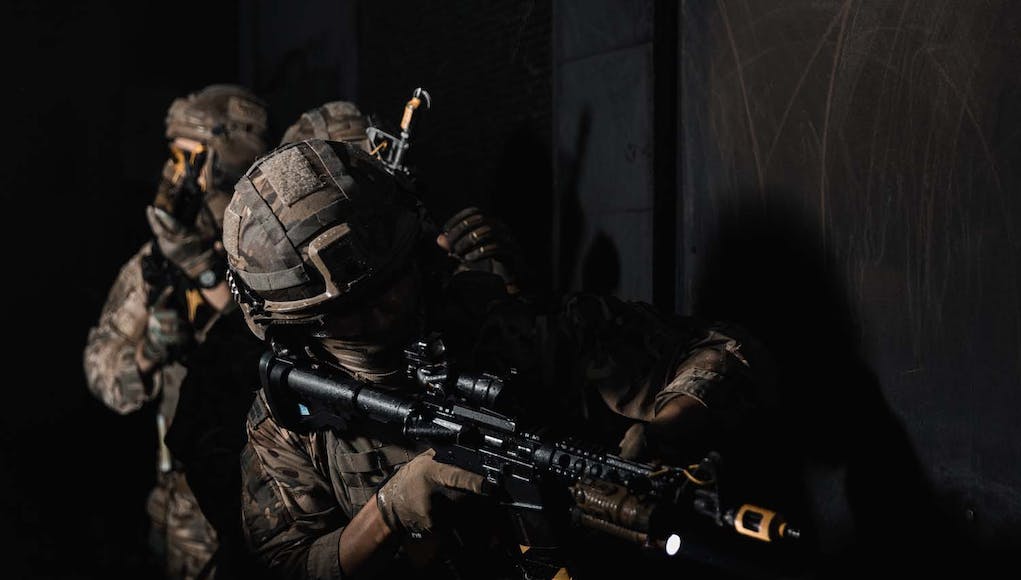 Royal Marines have completed two weeks of rigorous training in the skills needed to protect the UK’s nuclear deterrent, say the Royal Navy.

The Royal Marines of 43 Commando Fleet Protection Group are held at very high-readiness year round, guarding the nuclear deterrent carried onboard the Vanguard-class submarines based at Faslane Naval Base in Scotland. The commandos battled in a range of complex environments and challenging scenarios that ensure they are ready to safeguard the nuclear deterrent whatever the situation.

“Under the cover of darkness, troops fought through a multi-storey building in pitch blackness taking down any threats hindering their mission. Using every trick in their book, together with rapid, relentless and overwhelming force, the marines successfully overcame all hurdles the ‘enemy’ had for them. Following this, the commandos moved to a former bunker in the South West where they carried out training missions hundreds of metres underground in a network of intersecting passages and railway tunnels.  The commandos were told that a ‘high-value asset’ had been taken deep into the bunker and employing a range of their combat skills, were tasked with defeating their adversary and liberating the asset, combining technology and agile thought to produce success. The Faslane-based marines followed this up with close-quarter battle training at Wakefield Armed Police College, moving to the target area as a Helicopter Assault Force via CH47 Chinook before clearing through buildings testing their method of entry abilities to provide operational assurance in built-up environments. Not resting on their laurels, the commandos moved onto their next scenario which saw an enemy preparing to fly out high-value assets. Observation posts were positioned and a recce was carried out on RAF Woodvale, on Merseyside, determining enemy movements and positions, calculating the best way of taking down the threat without risking the safety of the assets. The following day at first light and again deploying as a Helicopter Assault Force via Puma helicopters, the commandos struck, taking the runway and securing the base before their adversary could leave with the stolen assets. Quick Reaction Forces were tasked with clearing aircraft hangars and taking down well-protected enemy positions throughout the training area.”

“Exercise Driven Defender provided R-Squadron, 43 Commando, an opportunity to conduct challenging role training in a variety of complex and novel training environments across the UK following the cancellation of the original US based version of this exercise.

“Following this, the commandos moved to a former bunker in the South West where they carried out training missions hundreds of metres underground in a network of intersecting passages and railway tunnels.”

Browns is small, and beneath a still active part of the Corsham MoD estate on Skynet Drive which links to it via the surface bunker buildings. ( Old 1001 SU / CDCN site )

Maybe elsewhere in the quarries, Spring or Tunnel? I’d still be surprised they are using that area for training. It’s big enough I guess.

Or Dean Hill? Or the old RAF Chilmark? They both had railway access too.

Yes… “hundreds”… I would read that as meaning ovet 200m. Indeed at least 300. Over 600 feet is quite deep. But equally I would have thought the issue was the tunnels, and did not really matter if they were 20 feet or 200m deep?

I agree Trevor. It is the environment, not the depth. As for the depth description “hundreds of metres underground” I suspect that is a bit of exaggeration by the original reporter of the story on the RN website. For example, the location Crab and I were speculating about, parts of the Corsham Quarries, I don’t believe they are deeper than 100 feet. Indeed, I doubt there are any UK military underground facilities at 600 foot depth! I’d be delighted to find that there are, actually. Most bunkers seem to be partially sub surface. It is the US ones that are… Read more »

The CAD and nearby facilities were always taken as being 100 feet deep, when I worked in that area. As I’ve mentioned before, I used to lead tours around the CAD. That – and the nearby tunnels – could be quite spooky if there was only one or two of you there!

Yes, I recall you said. Not been in for a tour myself, but from photos I have seen, mainly the Spring Quarry bits, the walls are all painted white? Is that the same for the wider CAD? I looked at the 60 plus photos on the RN site of the exercise to see if I recognised any as obviously being Corsham, but there are none.

Hi Daniele. It’s been a long time since I was trudging round the CAD, but the only walls that were painted were the train platforms, workshops, offices and living quarters. The actual storage areas, as I recall, were unpainted rock.
Cheers.

I assume this means the facility at Carr Gate used by WYP.

Seen some vids on that it looks pretty state of the art, but interesting the military are using it?