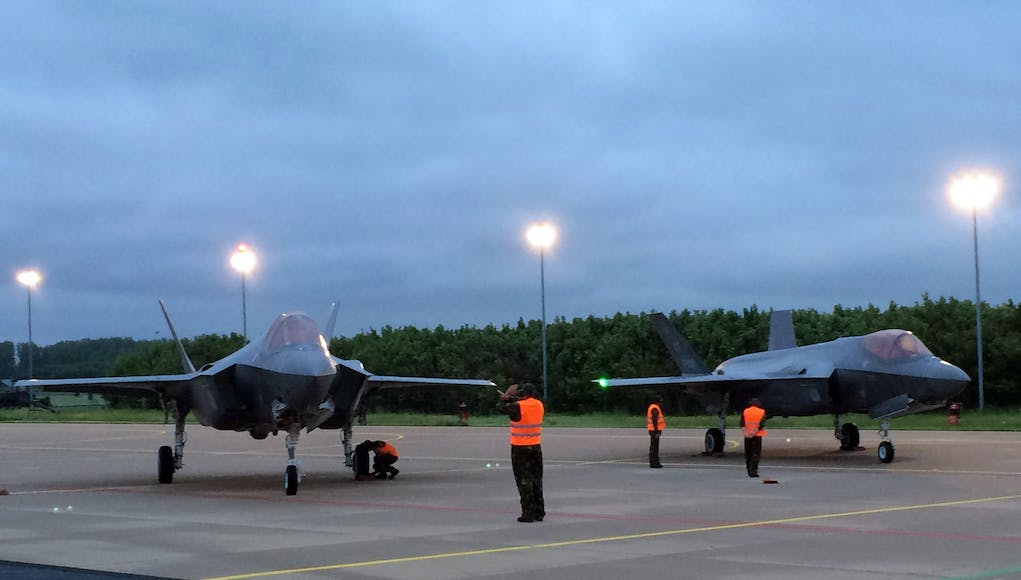 The Netherland’s first two F-35’s have arrived for the first time at Leeuwarden Air Base in the Netherlands.

Two of the F-35’s pilot’s Colonel Bert “Vidal” de Smit and Major Pascal “Smiley” Smaal conducted a fly by for the nearly 2,000 base members, dignitaries and media before touching down at 9 pm. Netherlands Minister of Defence Jeanine Hennis-Plasschaert was the first person to greet the two crew members. Their arrival was broadcast live to the entire country and video of it can be seen here.

According to Lockheed Martin, the jets known as AN-1 and AN-2, the jets are spending three weeks in the Netherlands for a variety of purposes. They will conduct both aerial and ground environmental noise tests, perform flights over the North Sea range and then appear and fly at the Netherland’s Open Days, the largest airshow held annually in the Netherlands. The F-35s are performing noise tests at the request of Minister Hennis-Plasschaert.

During meetings held in February 2015 with residents living in the surrounding area of the two air force bases, she promised to bring the F-35 over to the Netherlands to enable local residents to experience and compare the noise-level of the F-35 with that of the F-16 currently in use.

The Netherlands currently has four pilots and 27 maintainers, but its cadre will grow substantially during the next three years as the Netherlands prepares for a total of 37 aircraft permanently based starting with Leeuwarden in 2019 and then Volkel Air Base in 2021.

Hang onto the F-16s, these birds are unproven!

So is every new plane when it’s first introduced. If everyone took that attitude then all the world’s air forces would still be flying biplanes.

So is the spear, should we of kept that and not bothered with the rifle.

F-35 is the camel of the aviation world, designed by committee and all things to all men. When I’m on the ground under fire I want an A-10 not something that cannot keep low and slow.