The Royal Navy have announced that an F-35B Lightning will appear at the Royal Navy International Air Day on Saturday 13th July at RNAS Yeovilton, Somerset.

It is understood that the aircraft will be making an airborne-only appearance with two flypasts – one slow and one fast.

A full-sized F-35B model with cockpit access will also be on static display for a close-up look at the UK’s new fifth generation fighter, say the Royal Navy.

Recently, the 17th F-35B for the UK was delivered. Numbers right now are exactly where they’re expected to be and inline with the 2015 Strategic Defence and Security Review.

Despite its prolonged and difficult birth the F35 is the combat aircraft of the future.

But it’s support and update costs are going to be very expensive.

This should give you some idea!

“This more intensive software development effort may also boost the cost of follow-on modernization. During a March hearing, Winter acknowledged that U.S. and international customers could pay up to $16 billion for Block 4 modernization — a figure that includes $10.8 billion for development and $5.4 billion for procurement of upgrades to the F-35 between fiscal years 2018 through 2024.”

The OCU is due to stand up in the next month or two (207SQN) and more aircraft are expected to be delivered to Marham. Does anybody know if these further 2 milestones are imminent?

Wow! Is that the best they can do two flypasts “one fast and one slow” what a joke. Bare minimum thinking as usual from the MOD.

I remember one year at Mildenhall, the annual “Air Fete” laid on by the USAF, there was a whole squadron of Sea Harriers hovering line abreast down the runway. What a sight….

With so few assets now a singleton is fine but why can it not land and spend the day at Yeovilton so taxpayers can see what they are paying for??

Perhaps the ALIS system would not let it get in the air again?

Hi Daniele, I remember that same routine at Farnborough International in about 1988/1990.
Six Sea Harriers FRS1, plus helicopters ……….. what a sight, what a noise!

Quite Alan! Regards and good memories.

Hi Cam, To be fair, I think it’s far too early in the F-35B introduction-to-service phase for the RAF/FAA to work-up an aerobatic air-show routine; there are other more pressing priorities. F-35B is no different in that respect from when Tornado or Typhoon were introduced.
With thousands of spectators on the ground, flight-safety is paramount – and a fully rehearsed display is needed. But here’s hoping for one in 2020 …..

If the Tempest program doesn’t go as badly as Typhoon and Lightning II one could be flying before the UK gets it’s full compliment of this aircraft. 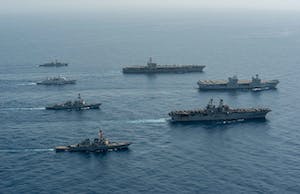 July 12, 2021
The combined Queen Elizabeth, Ronald Reagan and Iwo Jima strike groups "symbolise the might of the U.S. and UK partnership".