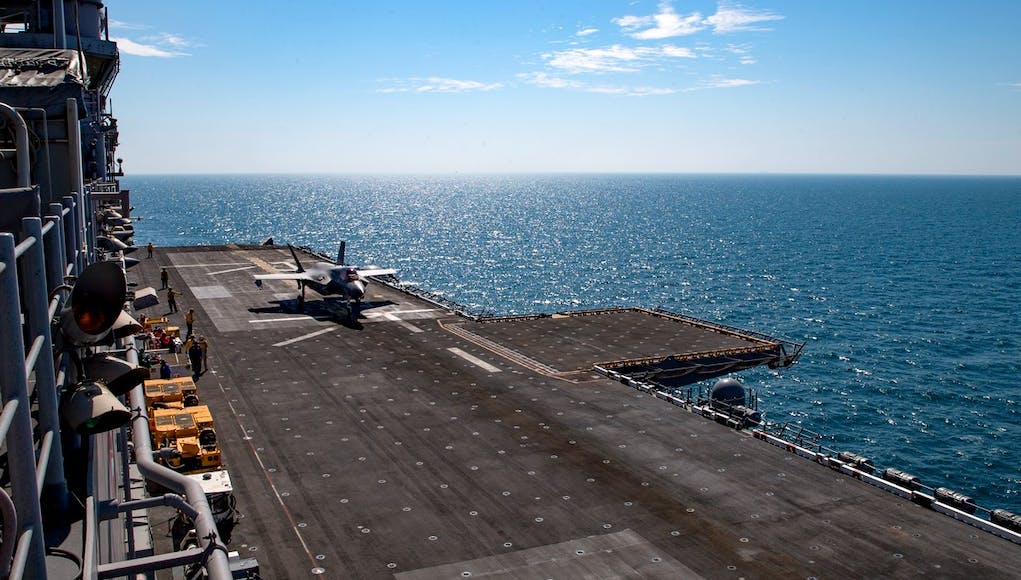 Operation Inherent Resolve is the U.S. military’s operational name for the International military intervention against Islamic State/Daesh in Iraq and Syria.

“We look forward to exercising the capabilities in our arsenal while in theatre and remain ready to deliver those capabilities at any time if called upon.”

The U.S. Navy say that the Makin Island ARG transited through the Strait of Hormuz and into the Persian Gulf on February the 8th.

“The MEU’s ability to source combat sorties from the Makin Island, while simultaneously supporting training and operations, is a testament to the flexibility and responsiveness of our Navy and Marine Corps team,” said U.S. Navy Capt. Stewart Bateshansky, Makin Island ARG commodore.

“We are proud and excited to be able to support missions in areas of the world where we are most needed,” said U.S. Marine Corps Lt. Col. Christopher Kelly, VMM-164 (Rein.) executive officer.

The U.S. 5th Fleet AOO encompasses about 2.5 million square miles of water and includes the Persian Gulf, Gulf of Oman, Red Sea and parts of the Indian Ocean. The expanse is comprised of 20 countries and includes three critical choke points at the Strait of Hormuz, the Suez Canal and the Strait of Bab al Mandeb at the southern tip of Yemen.

Operation Inherent Resolve…. the Yanks do like a strong sounding name for an Op. None of the Market Garden or Corporate for them eh ??

I read somewhere that UK Operations are generated randomly by computer from a list of meaningless words.
The UK Operational name never very “steely” compared to US Operational naming which I believe is chosen for the single purpose of looking better on your deployment T Shirt!

Aye GB I know that used to be the case, I’ve no idea if it still is or if ‘we’ have gone down a slightly more aggressive approach…. guess we’ll find out at some point when we head off to Op Piglet/Enduring Kill The Brown Guys*

Actually the US military hates that name. It was imposed on them by civilians in the Pentagon during the Obama Administration.

Good to know mate, that cheers me up a bit

This ship doesn’t appear to have either a ski jump or catapults, just a longish straight deck. How do the F35’s take off with any appreciable stores?

They probably go light on fuel and AAR from a land based tanker before heading in.

Short Rolling Take Off, the enhancement of the ski jump while yes you can use less to get off the deck. than off a QE Class. but its the 20m better off at take off. also i am sure USMC can buddy fill their F35s. were the Royal Air Force has enough issues just training piolts…

I can’t find any info on F-35 buddy tanking provision (they can refuel from FA-18s, but LHDs don’t have those). I’m not even sure the USMC have IOC on MV-22 VARS tanking yet. The RAF provides A330 tanking to F-35Bs, but I think it only has the one plane.

You said it yourself: it has a longish straight deck. A ski-jump reduces the take-off speed considerably. To build up the extra speed on a deck without one requires a longer run up. This means while HMS QE can have take-offs at one end and landings at the other, Wasp class LHDs need to free up the length of the runway to launch with appreciable payloads.

Good lads, any taskings against the cockroach squad gets the thumbs up from me.

3 amphib vessels, an LHD and 2 LPDs with around 1200 USMC on and a couple of ABs. Not someone you want to piss off.