General Dynamics have been awarded a $64.8 million contract to support the second hull in the Dreadnought class ballistic missile submarine programme, HMS Valiant. 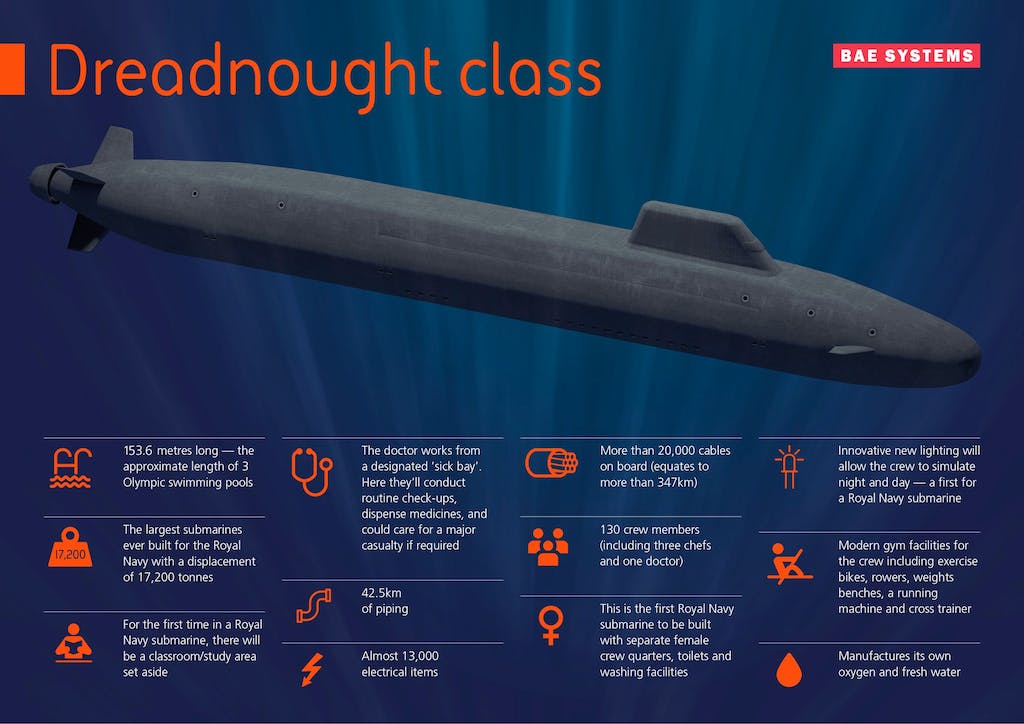 Work is expected to be completed in August, 2025.

This class of submarines are set to gradually replace the four Vanguard-class boats from the early 2030s comes. Construction on HMS Dreadnought, the lead ship in the class, started in October 2016. The submarines will be armed with Trident II D5 missiles.

The class has been purpose-built as a nuclear powered ballistic missile carrier, incorporating a selection of successful design features from other British submarines. Due to this it is quite unlike its predecessor, itself an adaptation of the Valiant class.

PWR-3, representing the third generation of British pressurised water reactors, builds on cutting edge nuclear propulsion research undertaken by the MoD and Rolls-Royce in the last few decades and is rumoured to be at a very advanced stage of development.

The exact nature of the UK’s industrial access to US reactor technology remains largely unknown in the public domain, the Royal Institution of Naval Architects reported previously that it is likely that the UK has been given a good look at the S9G reactor design that equips the US Navy’s Virginia Class submarines.

What so often frustrates me is the total shutdown on basic information in the UK concerning the progress of our assets if any problem arises. We were told that Audacious was due to leave Barrow months back but since then she’s sat alongside doing ‘b-all’ (as far as we ever know). Contrast this with American sites, which seem to promulgate issues, of which there will be sufficient, possibly in the belief that a) silence wont stop any serious party finding out details, b) folk who pay have a right to some knowledge, c) it helps ameliorate the rumour mill so… Read more »

With these new submarines and our Astutes and aircraft carriers we do still have a very capable navy and a capability 95% of the globe doesn’t have. We should be proud of our navy even if it’s scraping the bone with numbers of frigates and destroyers and atack Subs. But we are at 80 RN vessels again with the new OPVs. But no doubt we will lose the batch ones in the near future and will be back at the mid 70s again.

Batch 1’s were to be decommissioned when batch 2 arrived but are now being retained for border cutter duties.

If Gen Dyn are being brought in for this second boat then what were the problems experienced building the 1st?

I thought that, but maybe Boat 1 was a separate contract?

The 1st hasn’t been built yet either, it’s just a seperate contract in terms of support for boat 2.

As ICBM defence improve over time, I think we need to ask its 8 missiles and 40 warheads is enough. While keeping 8 deployed missile probably makes sense having atleast 16 tubes makes sense as well inline with US boats.