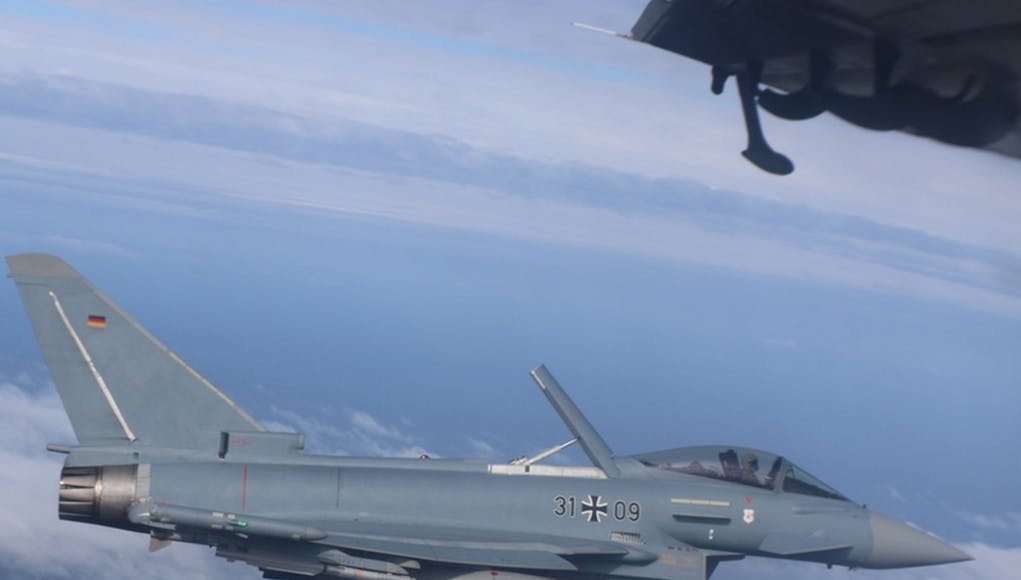 Share
Facebook
Twitter
Pinterest
WhatsApp
Email
The German Eurofighter detachment augmenting NATO’s Baltic Air Policing mission conducted operational training events with an Estonian Air Force M-28 transport aircraft and a German Air Force A400M cargo aircraft.
In addition to providing intercept capability to safeguard the NATO airspace in the Baltic region, the German Eurofighter detachment is engaged in regular training activities to further improve aircrew proficiency and skills, say NATO.
“In an unidentified aircraft training scenario, an Estonian Air Force M-28 transport aircraft simulated a loss of communications with air traffic controllers.
Two Eurofighters were tasked to intercept and establish a visual identification of the M-28, which due to the low speed of the transport plane was a challenge for the fast jets. The focus of participating aircrews and the air traffic controllers was on checking and applying all relevant tactics, techniques and procedures to safely execute the mission.
In Air Policing mission, NATO fighter aircraft are regularly required to intercept slow movers basis which is why training missions like the one with the M-28 are valuable for all involved.”
The German A-400M fleet has recently been upgraded with an air-to-air refueling capability, and three Eurofighters from the German Baltic Air Policing detachment had the first-ever opportunity to receive fuel in an operational scenario.

Wow is that a German Eurofighter actually flying. Amazing.
Must be one of the 12 air raft they have that are currently airworthy.

I’ve heard that those 12 can only fly in sunny weather and when there is no wind. Anyone know if this is true?

Must have their entire airworthy fleet deployed there.

Read this on the Luftwaffe yesterday: Germany sees €8.86b cost to operate Tornado jets to 2030 BERLIN: The German Defence Ministry estimates it will cost nearly €9 billion (£7.7 billion) to keep its ageing fleet of 93 Tornado fighter jets flying until 2030, according to a classified document provided to German lawmakers this week. The steep cost forecast includes €5.64 billion to maintain the warplanes, which first entered service in 1983, €1.62 billion to design replacements for obsolete parts, and €1.58 billion to procure them, according to the document, which was viewed by Reuters. Germany in January decided to pick… Read more »

One idea would be for them to have a mix of Typhoons and F35As. They only need a small number of the latter to carry the nuclear bombs and to clear the way for the Typhoons in the event of conflict, say 32 of them. At $85m a piece that’s a total of $2.72bn, plus of course running costs etc. Add in an additional order of Typhoons and it appears to be a better way of spending their money. Alas politics always gets in the way.

Surely we have masses of Tornado spare parts we could sell the Germans….

Unlike their parts inventory, ours are all combat tested and approved!

I have certainly argued they need to buy up as much compatible spares as possible when the UK Tornado fleet retires. They also need to do some sort of avionics and cockpit upgrade. Probably not as deep as what went into GR4, I think they could take the opportunity to do some reverse offset with the Israelis who specialise in that kind of work and are buying German Submarines and Corvettes.

Hi Rob, As I see it, Germany is never going to join the United States during the first night of operations against an integrated air defence network, so has little need of the advanced capabilities of the F-35. A better fit for German defence needs is operation of a single fast-jet fleet consisting of the superlative Typhoon – and a top-up buy of the Tranche 3 variant.

You are probably right but they have committed to being able to deliver air launches nukes for NATO, the F35 can do that.

Hi Rob, Good point – I guess though no reason why Typhoon couldn’t be certified to do so between now and Luftwaffe’s OSD for Tornado

@faoruk – Germany is under no obligation as a member of NATO to deliver the US sourced B61 nuclear bomb / missile. As indeed neither are the other countries choosing to deliver this weapon: Italy, Belgium, Netherlands and Turkey. The only German nuclear base is located in Büchel Air Base and like all bases handling B61 it is guarded by US Forces in US built shelters, loaded and coded by US Forces and its delivery is controlled by the US Government. It is hardly a German asset. Should Germany choose the Typhoon (as I believe it will given the manufacturing… Read more »

Sorry, is this a late April fools joke?
A German Typhoon actually flying??

A wealthy country like Germany should be at the forefront of European defense yet under Merkel it couldn’t even defend itself against a small Russian force. German’s need to get over the guilt of WWI and WW2 and start to pull their own weight. They can certainly afford it!

The Germans are very clever in relying on the US and Britain and France for defence while they grow their economy to be the most powerful voice in the EU. They k jecgbaf any confrontation with Russia will go nuclear very quickly. No point on keeping hundreds of aircraft and tanks around to rust.

I would be a Germany over the UK any day ie in a good economic position to support defence expenditure when necessary rather than ‘punching above our weight’ on a shoestring budget.

Yaaaàaawn the troll is out, but obviously having a few shandies as he is making less sense than his usual gibberish. Come on iqi, make more of an effort son as you are currently 1 out of 10 on the troll-o-meter! Try another subject son.