Glasgow International Airport has been partially evacuated amid concerns over suspicious cargo.

**UPDATE: Police said it related to a spillage from cargo on board the plane. The incident was stood down at 13:25 after the package was found to be safe.**

A spokesperson for Glasgow Airport said:

“At approximately 10am today, the airport fire service attended an arriving KLM flight in response to concerns raised over a piece of cargo.

Enquiries are ongoing to determine the content of the package and the aircraft has been cordoned off pending the outcome of the investigation. All other parts of the airport are fully operational.”

E/B Exit slip to Glasgow Airport is currently closed due to an ongoing incident.

I’m stuck in Glasgow , waiting on the plane, then got de-boarded due to suspicious package. Now gate has been sworn empty . Whole pier and virgin 747 was deboarded as well. Waiting on more info #glasgowairport #glasgow #kl1474 #klm @MailOnline @Independent pic.twitter.com/XrlFU2IqZY

I wouldn’t worry too much, just give John Smeaton a call, he’ll sort it out!

“Right lads..I’m only going to show you this once!!

“The whole thing had turned to shit..the poor guy was trying to commit suicide and people were beating the shite outta him!

“What must of it been like, the guys on fire, and people are bootin your baws!

Sounds a bit like an over reaction by the police/airport authorities…..

Why was the whole airport closed? Surely they could just have isolated the plane/cargo? There must have been a remote stand or somewhere away from the terminals/active areas of the airport that the plane could have been towed to….

Ever since 9/11 airport security has gone crazy. I see the TSA here in the US giving full body searches to 90 year old ladies all the time. That is just F’d up. 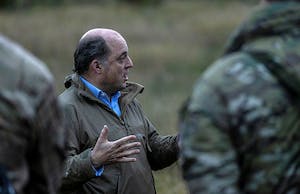 November 4, 2021
News that Secretary of State for Defence Ben Wallace has summonsed the Army Board for a "dressing down" hit the media this week.