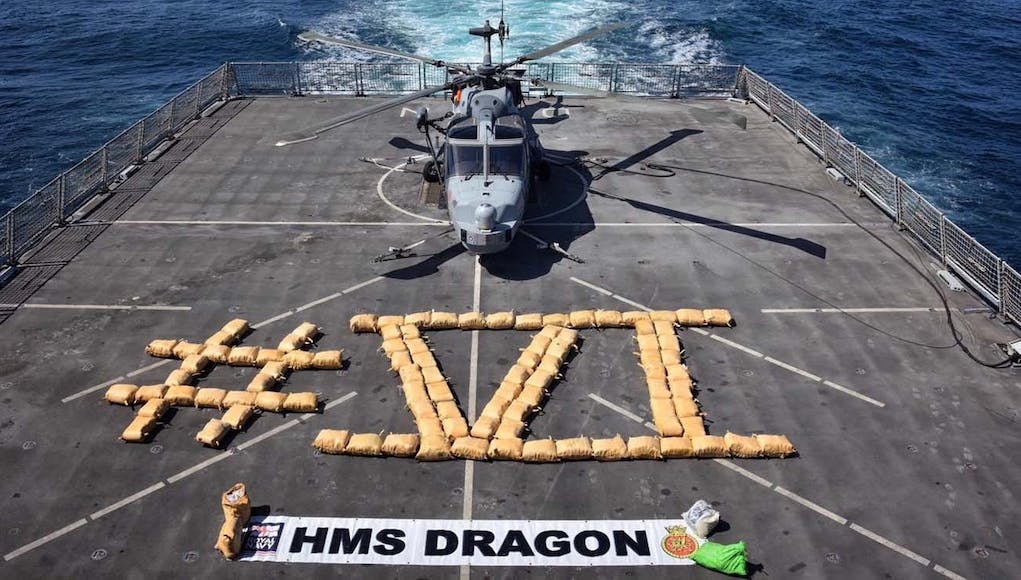 HMS ‘Puff the Magic’ Dragon has seized more than 2,000kg of hash with her sixth drugs bust in three months, say the Royal Navy.

The Type 45 Destroyer struck again almost immediately after her fifth bust, this time seizing 101 bags of hashish while on patrol in the Indian Ocean according to a news release.

The sale of these drugs is believed to be a source of funding for terrorist organisations and criminal networks.

“The outstanding work of HMS Dragon’s crew continues to be a credit to Britain and its Armed Forces. These significant seizures stop cash flow to terrorists, hurt criminal gangs who fund them and hinder the supply of harmful drugs to streets around the world, including Britain.”

According to the Royal Navy in the aforementioned news release, the story went as follows:

“The suspect vessel was spotted by the warship’s Wildcat helicopter during a night-time sortie. After closing in on the dhow and taking a closer look, HMS Dragon decided to investigate further.

Launching her two fast sea boats, each one carrying a boarding team of sailors from HMS Dragon’s crew and Royal Marines from Plymouth-based 42 Commando, they swooped on the dhow – a type of fishing vessel common in the Middle East.

Questioning the master and his crew, suspicions were raised that the dhow was not likely to be conducting legal activities and the search began.”

The ship is currently operating in support of Combined Task Force 150 – a multinational group which works to disrupt piracy, drug smuggling and terrorism in the Gulf.

I guess Dragon is the only RN asset there.

Maybe more apt for the T31’s in their proposed constabulary, anti drug and pirate patrols?

The RN should be using this as a down payment for a few extra T31 hulls.