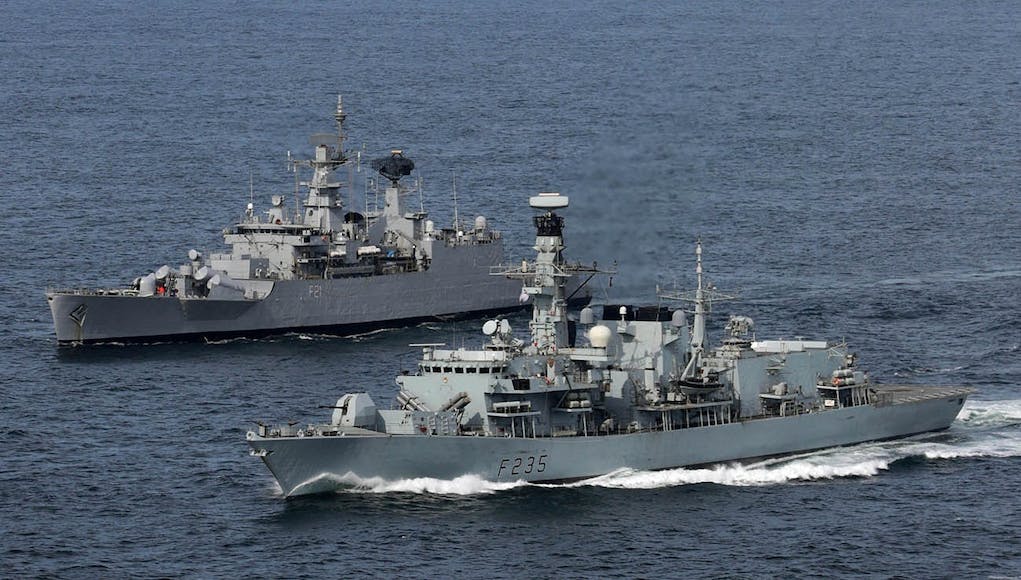 The crew of HMS Monmouth honed their fighting skills with the Indian Navy during their trip, say the MoD.

After a few days’ rest in the port of Mormugua, the frigate and her crew put to sea with the Indian frigate INS Gomati. Gomati was invited to join Monmouth for a day of joint manoeuvres and tactics off Goa.

“Although it may often seem like there are just two ships sailing around each other, these manoeuvres provide the best opportunity for the officer of the watch to get comfortable handling ships in close proximity to one another.

After the exercise in close proximity, the gunnery teams honed their targeting skills by letting rip with the heavy machine-guns and Miniguns, typically used for ‘quickdraw’ drills – responding to sudden attacks from fast-attack craft.

“Being part of the upper-deck weapons crew is definitely something I enjoy,” said Able Seaman (Warfare Specialist) James Kenyon.

“It’s not every day that someone can get to fire a weapon such as the heavy machine-gun. But it is still a challenging role with the amount of training that goes in to ensure we all remain ready to react to any threat at any time.”

With firings complete, it was the turn of the embarked Royal Marines boarding team – embarked on HMS Monmouth to secure and search suspicious vessels encountered on security patrols – used the Gomati for a practice mission.

The boarding exercise was designed to test both the ships’ boarding teams in disembarking ‘mother’ and embarking a vessel of interest in a short space of time, according to an MoD release.

Commander Ian Feasey said, “My ship and ship’s company have been superbly hosted by the Indian Navy, we’ve had the chance to build on the already-close relationship and ongoing engagement between our two navies.

“Most of the ship’s company have not had the opportunity to visit India before and everyone enjoyed what this historic part of the country had to offer.”

HMS Monmouth has now resumed her anti-terrorism patrol in the Indian Ocean.

She’s due to return to Plymouth before Christmas.

A frigate devote to cruising the Indian ocean looking for terrorists.
Wow… what a waste.

Now, if the RN had a cheap proper ocean going OPV, like say the Dutch Navy’s ‘Holland’ Class, then the high tier assets can be spared the showing flag/aqua-terrorist-hunting duties

Or the Khareef class corvettes that BAE built for Oman for the same price or even less than the River Batch 2’s.

But a Khareef couldn’t crane lots of 20 foot disaster relief containers off onto a Caribbean jetty or launch an arcims USV or lily pad a Merlin or sail 5500 nautical miles.

The primary role for the Type 31’s gentlemen.

Just so. As Hilda Baker would have put it, ” Be seeeeeen!”

If an OPV had been sent out, people would be complaining that all the RN could send was a patrol ship. It’s more for relations and political reasons that a frigate was sent.

If it is operating in the Indian Ocean you can expect that it might be required to operate in the Gulf. Which requires a heavier ship. A OPV would not be suitable. A frigate is more than suitable.

Sorry that was agreeing with Joe. If I was blonde that would be a blonde moment.

I dont think this is a waste of resource at all.

The nature of the RN’s task is primarily diplomacy with the ability to be in an area and represent our country’s interests. Seems to me that is exactly what HMS Monmouth is doing very well.

Size and scale does matter with these diplomatic type missions and for me keeping friends is as important as fending off enemies.

Just a Type-16 Leander on steroids.

Indo-Pacific Endeavour will focus on enhancing military cooperation with some of Australia’s key regional partners including Indonesia, Japan, India, Malaysia, Singapore, the Republic of Korea, the Philippines, Brunei, Timor-Leste, Thailand, Cambodia and the Federated States of Micronesia.

The design is over thirty years old and some of her kit even older… also with a crew of over 300. I’ll stick with Monmouth or a decently equipped Type 31.