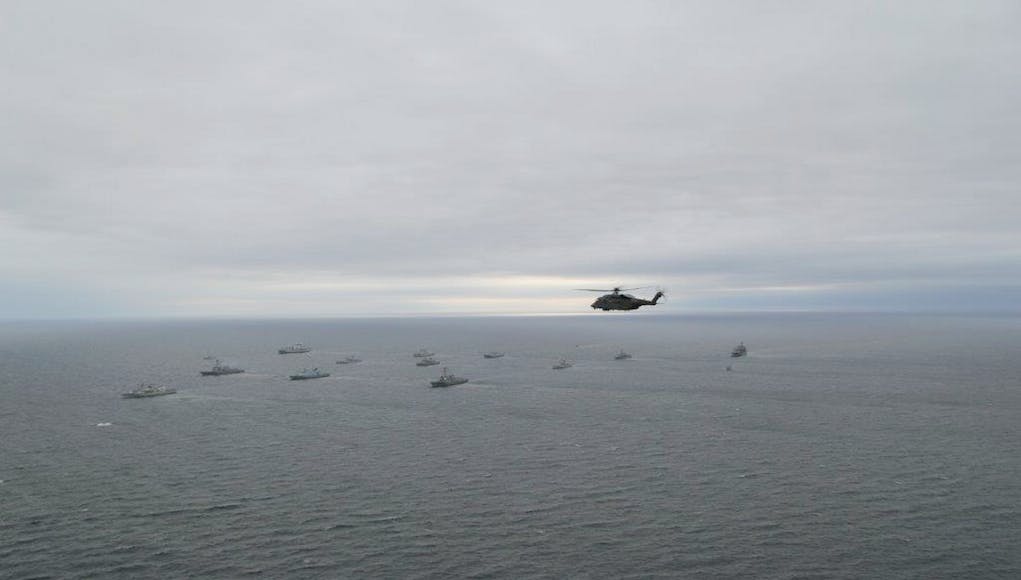 According to the Royal Navy, the Type 23 frigate is bringing the Royal Navy’s cutting-edge submarine hunting skills to the task group of 20 ships and 36 aircraft in the waters east of North America.

“The multinational force – which has been operating in the seas off Nova Scotia – are proving their worth in air defence, defence against attacks from enemy navies, air-to-air combat and, Northumberland’s specialism, countering submarines. Cutlass Fury is about strengthening NATO ties – Canada, Belgium, Denmark, Netherlands, Norway, Portugal, USA and the UK are all involved as well as NATO’s Standing Naval Maritime Group 1 – and getting Northumberland up to speed ahead of joining HMS Queen Elizabeth on her Westlant deployment.

After sheltering alongside in Halifax as Hurricane Dorian swept north, Northumberland headed out in the North Atlantic to go hunting and protect the Cutlass Fury task group from threats lurking beneath the waves. The warship – kitted out with towed array sonar to track submarines at range – located subs, planned attacks and charged targets, manoeuvring hard to ensure success using her torpedoes, depth charges and her Merlin MK2 helicopter.” “HMS Northumberland’s anti-submarine warfare capability will enhance the task group’s ability to project maritime power – and it’s a clear demonstration of the role that Devonport-based Type 23 frigates will have in supporting carrier operations,” said Commanding Officer, Commander Alexandra Pollard in a release.

“I have some very junior sailors, and this will be their first time away, as well as many seasoned hands on board. It’s an exciting time and it’s what we joined the Royal Navy to do.”

For the hard of thinking aka me, how do you prosecute a dummy torpedo attack on a submarine and call it a success without actually, er, firing a torpedo?

By first I mean well before any of the others do.

Bet she finds the sub first !!

We should put some of the kit off these 23s and put them on the type 31s, I’m sure the type 26 frigates will be getting new gear considering their cost.

I thought stuff from the T23 was going on both.

I would imagine that with its four diesel engines and basic non dampened drive train clanking and banging along, a sub could hear a Type 31 from many miles away…

T31 isn’t designed to be super quiet, I think a commentator on STRN stated that they are targetted to issue the same sort of noise levels as the T45, which I understand are relatively noisy (Compared to a T23/T26).

I was referring to the weapons and sensors John!

talking of clankind stuff i was on blake in the end of the1970’s (aaah the good old days of silent superheated steam), better than that rattling diesel stuff and the whine of a gas turbine, back to the past, that’s the way forward mind you that coa was a bugger to get out of your overalls

Ah, Blake and Tiger Andy, very capable ships, they could carry and operate four Sea Kings from what I can remember…

From “In focus – the Arrowhead 140 Type 31e frigate candidate” article by save the Royal Navy : “The Huitfeldt/Arrowhead is described as ‘quiet hull’ design and the bow mounted sonar would have some utility up to about 12 knots. The Huitfeldts are not in the same ASW class as a Type 26 and most critically their engines and machinery are not raft-mounted to reduce sound and vibration radiated into the water. There is space to allow Arrowhead to have raft-mounted machinery but this would have to be specified by the customer at the outset of construction.” In essence, much… Read more »

I believe it may be better to add Captas 1 towed array to the T31 as that is designed to get decent results from noisier hulls?

I totally agree with you Propellerman!

I am going to make some assumtions here, I suspect an Astute class is taking part, if so I wonder how she is fairing against this type of hunting. Also there is a T23 one of the older frigates, how is she managing against an Astue or Virgina class SSN? I have seen some comments about the new T31 and how noisy they will be, the Danes seem quite happy with their ships and it seems that Indonesia would be happy with them. So I am not sure of the yard stick for being quiet, if it is the T23… Read more »

@Ron
If it is the case that the T26 will Not match a T23, I have seen a design of the proposed Type 23M, has any one seen them?

Seen the concept for the T23M, I said before and will say it again but it is to late for anyone to listen the T31 should have been a modernised T23. Same hull, modern turbine, stealth superstructure, better weapons layout and incorporation of two 8 cell Mk41s and a CIWS above either the hanger of bridge, possibly a hanger for Wildcat and two S-100s or Merlin. Electronic suite as they are now after their refits.

But surely a modernised T23 would be a specialized ASW vessel, not a General Propose frigate?

I suppose you could say that, but then the T23 is a good general purpose frigate with a very good anti sub capability, all they are lacking is a CIWS system and the modern stealth or low radar visability construction. If you look at the proposed T31 it will have the UMS 4110 bow mounted sonar and Merlin, give it CAPTAS 4 compact which is containorised then it will have the same detection ability as the T26. The diffrence will be in hull noise. If they could do something with that for example mount the diesels of vibration reduction rafts… Read more »

A T23 is an ASW frigate. The equipment fit on the tail and non tail fitted ships is the same. All the machinery throughout the ship is the same. Sonar 2050 is a very very good active/passive bow sonar and they all have one. They are stealth feature designed frigates. The RCS is considerably less than that of a comparably sized vessel. It is something like a fishing trawler sized target on a radar screen. Over the years the Optional Extras that have been bolted on have increased the RCS but not by much. It was never planned to get… Read more »

Gunbuster, I totally agree, I like the T23, the bow mounted sonar 2050 is a very good sytem but it is to be replaced in the T26 by the 2150 so why not use the 2050 for the T31s. I totaly understand that the GWS 26 Sea Wolf was one of the best point defence systems of the time. I suspect the GWS 35 Sea Ceptor is probably better and as such does the ship does not need a dedicated CIWS, although it would be good to have just incase. Please don’t think that I am saying something bad about… Read more »

Would not a modernised T23M need a wider beam, maybe 18m, in order to take more top weight, including the MT30?

I did not come across the tech specs for the T23M but from the outline drawings it they did not seem to have increased any of the dimensions. It appears that the T23 superstructure was not to increase in hieght, and that much off the add ons that they gatethered over time was to be stripped back and incorporated into the design. Which makes sense as most ships gather top weight add ons. The superstructure material would also change to more mordern composit materials thereby in theory at least save weight. The diffrence in weight between a RR Marine Spey… Read more »

A T23 with a tail is very “hole in the ocean ” quiet in the patrol or ultra quiet state. During one time out on a patrol and this was with the old 2031 ,a 100% passive tail, we tracked for a considerable time a French bomber. They never even knew we where there. We tracked numerous other subs from various countries during my time onboard. With the extra capacity and modern electronics on a 2087 tail i have no doubt Northumberland did very very well in the free play open ocean part of the exercise. During CASEX’s (ASW exercises)… Read more »

Do you have any proof that the future T26s will not match a Type 23 frigate, including a Type 23M with a wider beam?

No, however the T23 hull/prop combination is the standard that many navy’s measure their hulls and subs against, as Gunbuster puts it a “hole in the ocean”, it was as quiete as you could make a ship. So if the T23 is almost silent then it will be hard to beat. Not only that but if you did improve the standard then I could imagine that rather than an enemy submarine looking for noise you will look for where there is no noise in the ocean. The area that a T26 could improve over the T23 is in the propellor… Read more »

That’s a very apt description. It crosses over very well to stealth aircraft. This is where the RF coating absorbs too much RF, so will look like a moving hole on the screen. Especially for low flying aircraft with hills/mountains behind it. The B2 has the best absorbent coating, even better than the F35s. But it is still designed to reflect some RF energy to a degree to remove the moving hole problem. It’s a very fine balancing act to reflect enough but not enough to give you away.

did it find anything? i don’t think we’ll ever know