Flagship HMS Ocean has completed her part in the BALTOPS war games staged by NATO in the Baltic.


The vessel reportedly lead not only the UK’s involvement but also served as NATO’s flagship.

“This year we had over 4,000 sailors and marines operating in 43 different ships from 17 nations, all honing their professional skills and making lasting partnerships.”
Col Garth Manger RM


BALTOPS was useful to HMS Ocean due to her impending amphibious deployment when she leads the RN’s Joint Expeditionary Force – Maritime to the Mediterranean in the autumn.

Exercise BALTOPS exists to demonstrate the unity of NATO allies and partners in the region whilst indicating strength in providing security in the Baltic Region.

She also had multinational NATO Command teams embarked, and was home to personnel from several NATO nations, and partner nations, including Italy, France, Germany, Spain, Sweden and the USA.

The Navy also deployed three mine sweepers with around 130 personnel for NATO operations in the Baltic Sea, North Atlantic, North Sea and the Mediterranean Sea. 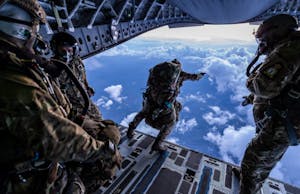