HMS Queen Elizabeth and her escorts were joined by American warships off the United States coast. 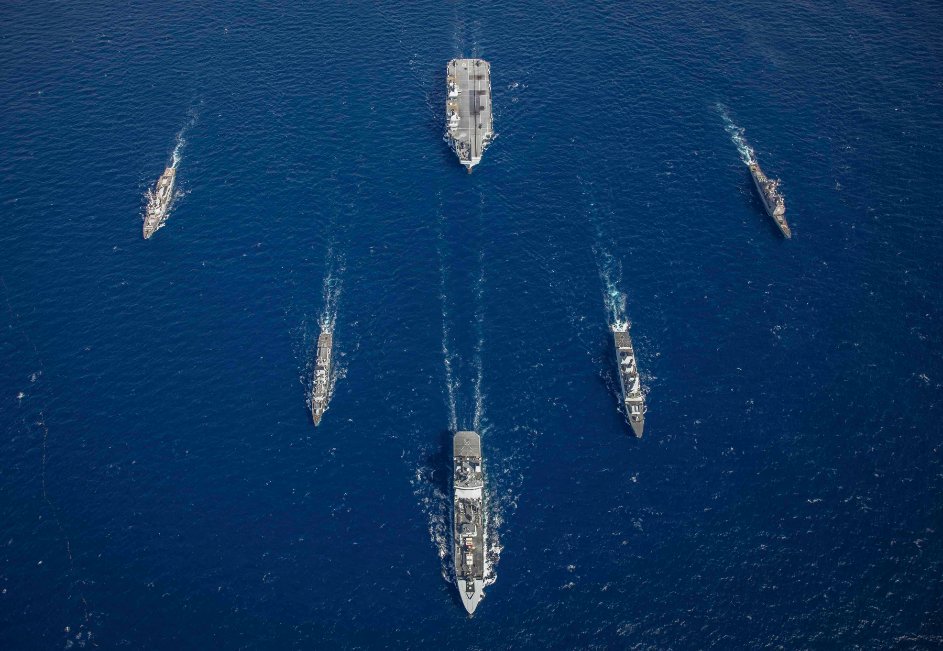 HMS Queen Elizabeth is the biggest ship ever constructed for the Royal Navy and the current WESTLANT19 deployment, say the Royal Navy, is designed to “put this formidable warship and her embarked F-35 fighter jets through their paces on the USA Eastern Seaboard”.

Along with HMS Dragon and HMS Northumberland, these ships form the Carrier Strike Group. Supported by RFA Tideforce they will also be joined by units additional from the United States Navy, US Air Force and US Marine Corps.

“Royal Marines from Lima Company 42 Commando and Fleet Air Arm assets are also embarked and include Merlin helicopters and Wildcats from Culdrose-based 814 and Yeovilton-based 815 Naval Air Squadrons and HMS Queen Elizabeth’s own 820 Naval Air Squadron. Commando Helicopter Force’s 845 NAS are also embarked in their role as the wings of the Royal Marines.”

The U.S. Ambassador to the UK, Woody Johnson, said:

“This is fantastic to see! The US Navy joins the Royal Navy and the HMS Queen Elizabeth Carrier Strike Group – our nations training side by side to ensure the security & freedom of the high seas!”

And a series of images on Thin Pinstriped Line with another good blog summary.

a real heart warming scene, pity we needed american ships to make up the group.but it does give a flavor of how a fully R.N group would look like. i still think all u.k ships should carry tomahawk.

Sighs and why is it a pity man ? Surely to €£&@ you don’t dislike the yanks as well ?? The way you seem to have major problems with us jocks . I’m beginning to think your a member of the snp aren’t you 😜

Oor Andra would fit in well with the SNP, they’re partial to a blinkered view, vaguely xenophobic and fond of howling at the moon……

Maybe it’s the Americans needing us and our carrier…

Aye, the US navy is on the bones of its arse and crying out for more platforms to put F35’s on……

Slightly OT but relevant. This is an interesting article about the competition for the USN’s new frigate. If you read it through, it covers the fact that HI is not releasing their design like the other firms and (among other options) it may be based on a T26 or T31 derivative… Interesting.

These ariel pictures clearly show the size of the Tide Class. December 12th will be very significant for the continuum of this reinvigorated Royal Navy?

Even more so if you see the pictures of QE and Northumberland being simultaneously refueled by the Tide.

On a sidenote, went to the local picture house last week in which to watch ‘Midway’ don’t bother and wait for it to hit the TV channels . This geezer’s first part of the battle of Midway is far superior
https://www.youtube.com/watch?v=Bd8_vO5zrjo

Yes the trailers were enough to put me off looked like something more akin to Tron than a serious conflict movie. If Video Games is remotely typical of their approach, I can’t imagine the storyline, acting, historical accuracy and direction are going to be better.

The best Midway movie will always be the one with Chuck Heston, ect. I loved that movie!

You mean the movie where Heston plays an entirely fictional naval aviator who volunteers for action by jumping into an SDB Dauntless dive bomber that morphs into TBF Avenger Torpedo Bomber upon takeoff even though no Avengers flew in the battle, then morphs into an SB2U Vindicator, none of which flew in the battle, morphs again into an SBD Dauntless for his attack, gets shot up, then morphs into a SB2c Helldiver at the ramp, and time warps to crash as an F9F Panther? That Midway?

Pk wrote:
“”even though no Avengers flew in the battle,””

Actually Midway was the combat debut for the Avenger. when between 7am and 8am 4/7/1942 the first attack on the Japanese carrier fleet was made by land based assets flying from midway which consisted of :
6 Avengers
4 B26s
15 B17s
16 Dauntless dive bombers

They must have cut the part where Heston gets in his transporter device, commandeers an Avenger off of the Midway air strip, flies it on to the Yorktown and then into battle. Too bad he didn’t have his phaser with him.

Absolute nonsense man have you lost your mind? The ONLY 100% accurate portrayal of the battle of midway is The 1980 flick “FINAL COUNTDOWN “ with Kurt Douglas when the USS Nimitz time warps back to 1941 and wins the battle it was the debut of the F14 and not one was lost !how about that for operational debut!

Its actually not a movie, but a new age digital history (lite) lesson for the millions of people (Americans) who have no idea about WW2 and the significance of any battle. The director provides a Fx summary (xtra lite) of the pacific war including the battle for Midway Island. Im not going to see it. This is an example of American movies artistic latitude and no replacement for the several excellent books written by American historians and servicemen who we’re present for the actual battle.

A bit like how they captured all the Enigma data from U110, and the very gallant S/Lt Balme had nothing to do with it. And neither did Bletchley Park!!

but nevertheless it was well done and does bring military history to a generation who know nothing – particularly pertinent as WW2 veterans have largely passed now. Next on: “Stringbag” – the hunt for the Bismarck or “Faith, Hope and Charity” – the battle of Malta

UK and France to build unmanned mine clearance craft