Home Sea HMS Queen Elizabeth could deploy before 2020 in the event of an... 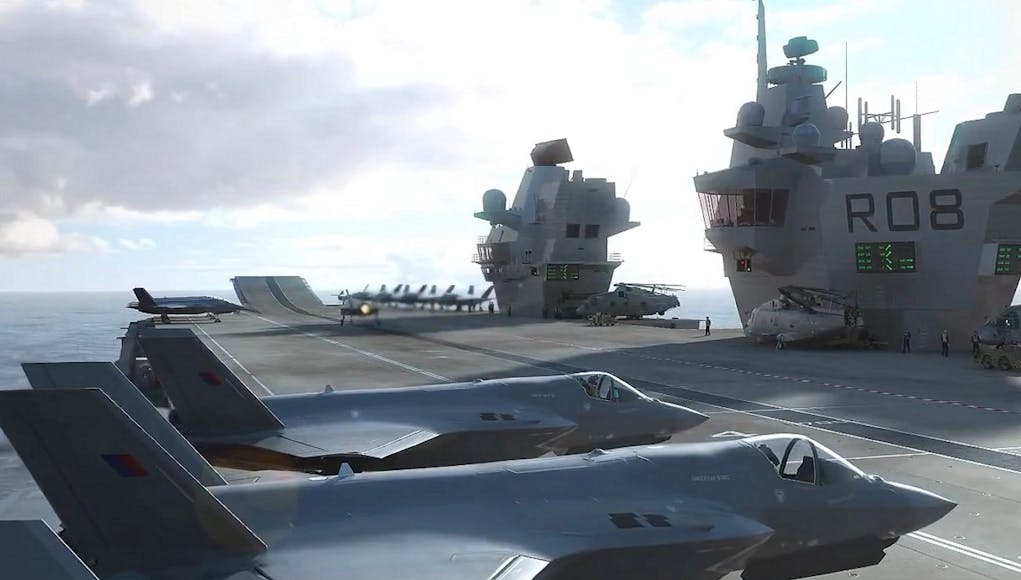 The Ministry of Defence has examined the feasibility of deploying Carrier Strike before December 2020 and advised against this in anything other than an operational emergency.

According to a report on carrier strike by the National Audit Office:

“Increasing awareness of Carrier Strike as the equipment is completed may lead to demand for it to be deployed earlier than December 2020. The first carrier is expected to sail during 2017 and the first squadron of jets will be flying from the UK in 2018.

It would also disrupt the Department’s planned schedule. The Department has examined the feasibility of deploying Carrier Strike before December 2020 and advised against this in anything other than an operational emergency.”

The NAO also found that there is ‘increasing pressure on a few highly trained personnel to operate the capability’. There is a shortage of military personnel, running at 4% below a target strength of 145,560.

Staffing gaps include engineering roles and warfighting specialists in the Royal Navy and engineering, intelligence and some aircrew cadres in the RAF. To minimise the impact of these gaps on Carrier Strike, the Ministry of Defence is prioritising it and carrying out targeted recruitment.

Where is to going to sail to fantasy island?

No, probably the Gulf.. Look forward to seeing the first deployment

Thing is John if it’s the Gulf then the actual requirement for escorts, surface or sub-sea is minimal, both in itself and in terms of other countries escorts. It’s the carrier itself is the big ticket item, and the UK would be providing one. Who else would, apart from the US? Scotland? (I couldn’t resist that). It’s by no means certain the C de G would be there. And if there were as few as 3 F35-Bs aboard, that’s 3 more than currently. The key thing is that the first arrivals for the RAF be the F35-B variant, so they… Read more »

I’m cluttering up this board but when my dander is up – it’s up.

What needs to be looked at is the history of missions in the Gulf. How often was it a single flight of 2 Tornados, and how often a full squadron – or 2 full squadrons? It’s the former, 2 or 4, and all it means if there were a limited number of F35-Bs on board is that they’d be running hot. Well, how novel, how unusual for that to happen with the Navy, Air Force and Army!

Or as the Arabs call it the Arabian gulf

Personally I’m half full, if the capability is there for an emergency operation, then it’s there, as the operation continues new arrivals can be ferried out, skills will grow rapidly “under fire”, and perhaps the key thing is that there aren’t still any dockyard workers on-board.

Was it not Hammond who slowed production speed of the QE a few ago to make short term savings?. No wonder she’s not going to be on time but training most certainly not be rushed or cut purely to rush her into full service.

No – it was Gordon brown

Remember the old joke about waiting for a bus? Well, we have all been waiting fifty years for a decent carrier and now two come along at the same time. Well…almost! Let’s be thankful that we are getting close to having a modern blue water capability for the first time in decades.

The budget may be even more if they have to employ retired sailors. They will need to install stannah stair lifts

The delay to the QE class and the under ordering of type 45s to just 6 hulls was the Blair Brown government’s fault. They used the savings to boost defence budgets to fight the Iraq and Afghan wars. The rot set in under labour and then was compounded by Cameroon. Who scrapped Harriers and sent Ark Royal to scrap yard as well as 3x type 23s to Chile ( which we could really do with now) and scrapping our highly specialised type 22 batch 3 frigates. All that is in the past we simply need more money to go into… Read more »