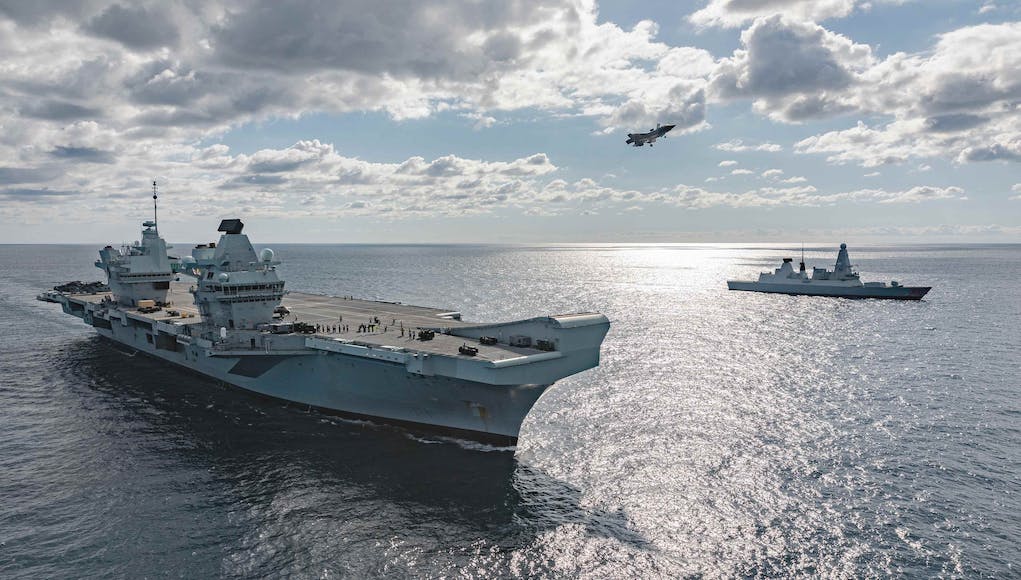 We were proud to host the most senior @USMC Marine onboard this week, @CMC_MarineCorps . Gen Berger and his staff watched their F-35s fly from our decks – a fantastic display of our interoperability and precursor to our first operational deployment in 2021. #WESTLANT19 #teamwork pic.twitter.com/ezuKK1Qops 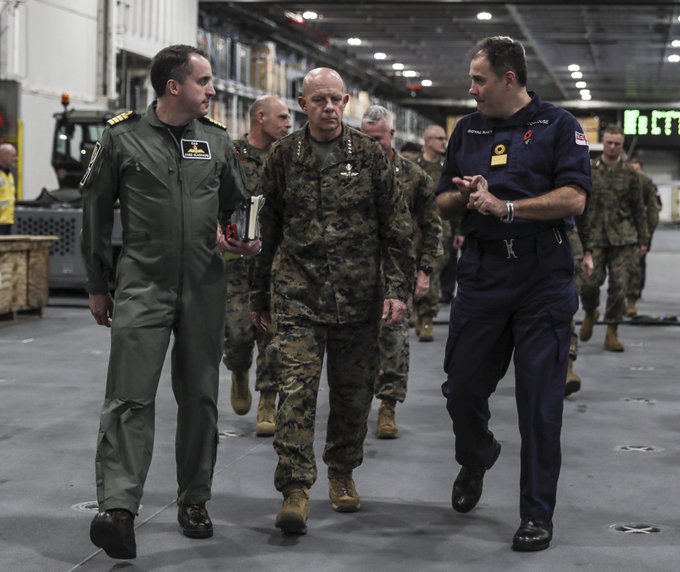 It’ll be interesting to hear the comments from the first USMC F35B pilots that are embarked on the ship and use the ramp. They will probably do sim training and use the ramp at Pax River to get initially qualified. But having the ability to take-off with a full fuel load and weapons load, compared to when they operate off their flat deck mini carriers. It must start to raise some interesting questions? I know they have said they didn’t want their ships fitted with a ramp, as it limits the decks’s ability to park aircraft. The USMC are being… Read more »

This is a really good question. All organisations need to learn and adapt. I’m sure the USMC will learn from the experience of operating from the Big Liz.

Well the yanks did learn from us before, slanted deck.

The Tangerine Tinted Buffoon (AKA Trump) has previously stated the QE design should be looked at. As you say deck space is critical on a small platform and lets face it for a fully hot environment a Nimitz or Ford would be around doing CAP and deep strike and general controlling the air environment and the USMC platform would be providing close air support. All that said the Invincibles were small and had ski jumps. I think more the point is that to get the full use out of the ski jump you need to run at it so the… Read more »

From the Tarawa Class onward, USMC Amphibious Assault Ships are over 40K Tons displacement and over 800ft in length. From the Wasp Class onwards, there are two lifts fitted on these ships. All of these ships were as big or bigger than the RN’s last conventional carrier, HMS Ark Royal. However, all of these ships are Assault ships first, and carriers second. The Harriers were there to provide ground support on these ships, but the priority was to moving Marines from ship to land. How the Marines operated their ships was doctrinally different from other navies. So the ski ramp… Read more »

John for cost of Ford class carrier you could purchase 3 possibly 4 QE carriers.

The last time we discussed this one major argument was that they didn’t want to lose landing slots. That’s not helped by the fact they have a Port lift already taking up substantial space whereas the Queen Liz has her two on the Starboard side which seems a far more logical layout keeping flying and non flying activities separated. Don’t know what other factors dictate this on the Americas, the workshop on the starboard side in front of the island hardly helps matters, though is being eliminated on the next ships any way, but these like the big carriers are… Read more »

It’s not deck space per say. Its landing spots for helicopters. Remember the gator carriers are amphibious assault ships first, and need to put troops on shore rapidly more than fly aircraft.

The USMC know all about the benefits of ski jumps for carrier takeoff’s, they were doing them for years with exchange pilots on the old carriers. They also know that US politics will stop them from ever being used on USMC platforms.

I fully agree . It comes comes down to congress only approving 11 dedicated carriers and a ski jump on a wasp class would undermine the carrier lobby so that’s one major reason why it won’t happen

Meanwhile the competition keeps growing. I DO wonder about the build quality of these vessels though. Meeting a production date at any cost can result in a LOT of defects – not referring to any OPVs run by a friendly power of course… 😀

I’d say there is some truth in your question. I do remember boarding a Chinese made merchant vessel a few years ago, it was brand new but speaking to the Captain he said the owners would only keep it for about 10 years then get rid of it. The Capt was not very complementary about it.

Fair points. Let’s face it they won’t bother about defect or accidents or the conditions of their crew.

your not wrong there,but we and the west have allowed this because of cheap labour = mass importation which gave China it,s economy to build there military at a crazy rate,even quicker than Russia,the only saving grace we might have if the quality of there military equipment is anything like the junk we buy,from them then hopefully it will break right at the time when they need to use it

I’d say that joint cooperation and sharing of military capabilities – not more alliances – there are enough but actually integration of our militaries is going to be the (only) way to maintain global military reach and cutting edge capabilities in the future. This article discusses the LRASM being integrated now on the USAF’s B52 fleet and the possibility the same may be done on the P8 (which is a no-brainer IMO). This could serve as a textbook example of full joint integration where the sum total contributions of individual countries is far greater than the actual resource (s) provided.… Read more »

Yes I do believe you are correct in regards to NATO, to many nations with little common interest or culture.

Let’s be absolutely honest, would western nuclear powers be willing to risk A nuclear exchange with Russia over a nation that we don’t really share significant cultural or historic links with such as Turkey.

I think we regarded the Japanese the same before they whooped our butts in WW2, Never underestimate your enemy.

My only concern when watching these 35B jets coming in to land, is the time taking to approach/hover and then maneuver sideways to land, it seems to have to use a lot of fuel and time to complete the landing, hopefully that time will be reduced, it will be interesting to see how many 35B’s can land under battle conditions, I’m posting as a ‘non-expert’ regarding this matter.

Looking at the body language in the picture, “We were proud to host the most senior @USMC Marine onboard this week, @CMC_MarineCorps” ……….. there is really no doubt as to who is the dominant partner in the relationship onboard between USMC and RN!

Looks like he’s a little disgruntled about having his ear chewed off more like. RN aren’t very humble; all their social media posts look like over excited children have posted them. Embarrassing sometimes.

looking at his photos on Google images, that is his standard expression!

If im getting your meaning, then that is not good Alan! Just because we are close allies militarily HMS QE is our vessel and we should be in charge.
The chaps either side look frantic to please Big Daddy.

I suppose it’s good that they are coming along on Lizzies first mission but if they start thinking that their giving the order’s then its time to remind them whose ship it is. As were not intended to go into a full blown conflict its more of a PR stunt anyhow. Because of the slow buy rates of the F35b we could still do it with our planes & generate a good rate of fire power within the carrier strike group.For what ever it might be used for in it’s initial mission

He is a very senior officer (one of the most senior) of our closest ally. Our guys are far more junior senior officers. Body language is as you would expect ,they are not peers.

That’s an awful lot of deductions based on an instant of 1/100th of a second. In the next frame stoker Smiggins is giving the bunny sign behind the General’s head!

What’s the story of Nimali Amaratunga Brearley? RIP appeared at the end of Britain’s biggest warship. 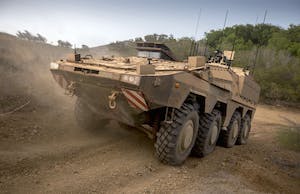