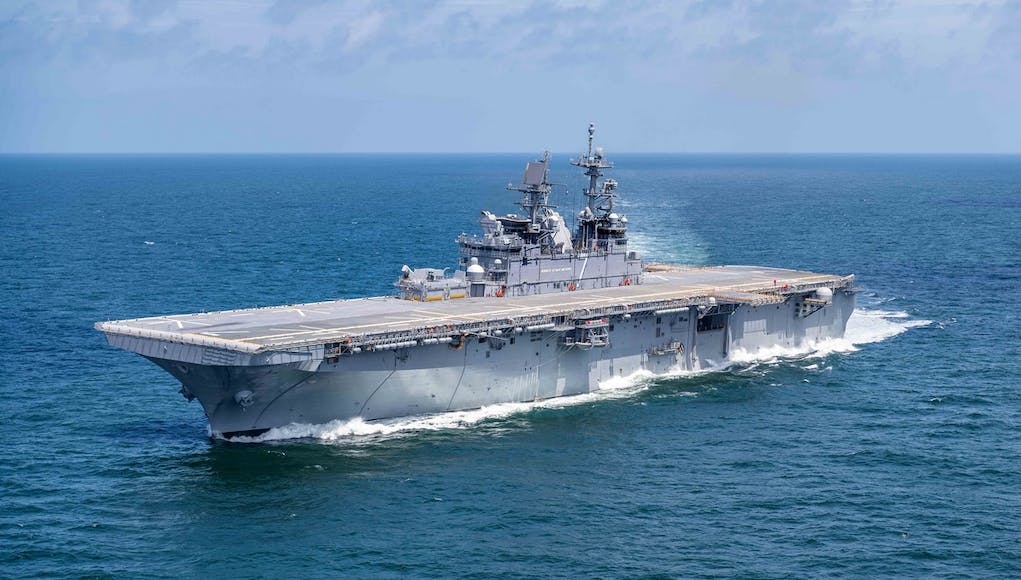 The second ship in the America class spent four days at sea in the Gulf of Mexico, testing the ship’s main propulsion, combat and other systems before returning to HII’s Ingalls Shipbuilding division say the firm in a release.

“We have an excellent leadership team, and they will now be focusing on getting the ship ready for acceptance trials and delivery to the Navy. The flight deck modifications to support the F-35 Joint Strike Fighter aircraft provide an increased aviation capacity and demonstrate how an experienced team can evolve the platform to meet the current threats across the globe.”

Ingalls is currently the sole builder of large-deck amphibious warships for the U.S. Navy.

The shipyard delivered its first amphibious assault ship, the Iwo Jima-class USS Tripoli, in 1966. Ingalls has since built five Tarawa-class ships, eight Wasp-class ships and the first in a new class of ships, USS America. The third ship in the America class, Bougainville, is currently under construction at the shipyard and will be the 16th large-deck amphibious ship built at Ingalls.

Like the lead ship in the class, Tripoli is designed for survivability with increased aviation capacity, including an enlarged hangar deck, realignment and expansion of the aviation maintenance facilities, a significant increase in available stowage for parts and support equipment, and increased aviation fuel capacity.

Similar to its predecessors, the ship will be able to operate as the flagship for an expeditionary strike group, say the US Navy.

I am consistently amazed that they don’t just put a ski ramp on these things gaining all the efficiencies that would entail.

Yeah I agree, is it too british for the yanks I wonder. And on another note they could have tidied up the island and boat in general and made it look far more modern it looks like they just flung parts anywhere they could.

Yes they have finally seen the light on that one, future ships of the class wont have that structure in front of the island used as a sort of workshop and Sparrow/Phalanx location and the island itself will be more compact. The US do at times seem to stick to long held design tradition on their ships rather than rethink long term concepts that seem as in this case to be copied through habit from previous designs without questioning.

modern american warships are the ugliest on the seas

By adding a ski-jump they’d lose a third of the ships’ landing spots for helicopters/tilt-rotors. Why would they want to do that? They’d neuter their heli-lift capability. Remember that these ships are designed for primarily for assault; their F35s support that function. If they need a more tooled up aircraft, I’m pretty sure a Nimitz would be nearby.

Anyone know how many landing spots that they actually employ?

Bloke down the pub
Reply to  Bob

Even a low angle ski-jump provides benefits over no ski-jump. Helicopters are able to land on a slope, so there must surely be some angle that would benefit F35b launch without losing a landing spot.

It would be great if someone could invent a ramp that uses hydraulics to pop it up from the deck and into position when needed and then folds back down into itself flush with the deck when not needed. I can picture it in my head and how it would work…it could even extend of the front of the deck by a fair way giving a bigger run off.

No one seems to know the answer to my question above re landing spots and I can’t get an exact figure. From photos it looks like 7 spots on the port side though one of those is where the lift is. The Canberra with a ski jump and around 2/3rds the size has 6 spots. That ship certainly does not lose a third of its landing spots because of it’s jump just one at the most and the ski jump being the same size on a larger ship would therefore overall be less compromised though still would be one spot… Read more »

It’s funny how the US cannot decide on how the LHD should be laid out, either with an increased hangar size and no well deck or well deck and half size hangar. There doesn’t seem to be a firm decision. One thing I did notice with the LHDs and the FS Tonnerre in particular when in France, is how very high sided they are. I suppose this is to take into account the requirements for both a well deck and hangar.

At the cost of valuable deck space. These ships carry thousands of Marines and their helos/aircraft. They need all the deck space for those aircraft.

The reason they don’t fit a ski ramp is because it takes up valuable helo space on the deck and the marine ethos is for the plane to fly from bases close behind the front line and not use the ship as a mini aircraft carrier.

So the marines storm the beach the cbees build a airstrip and the F35B operates from there not the ship.

Trouble is these have been talked up by the strategists including the navy itself as ‘Lightening Carriers’, (especially these first two that don’t have Well Decks) and consisting almost entirely of F35Bs on board in such deployments.

Wow i thought they had well decks, isn’t that a huge part of the marines assault strategy, I suppose that’s where the enlarged hangar and other facility’s came from.

Absolutely and the compromise on the next ones is considerable in relation to hanger, aviation storage and fuel space (the latter will be less than the previous Wasps). The whole class has much reduced hospital space too so one can see the various compromises needed to emphasise either seaborne or airborne operations and get the correct balance. Interestingly one innovation that helped the decision to re introduce the Well Deck on the next ones is the new fuel being introduced which can be used for the Ships gas turbines, the aviation assets, the landing craft and the hovercraft eventually too… Read more »

They build good ships with very clear purpose, functional and they last. Something we could learn from and build for mass of keels, rather than purely having the very best of everything and fewer keels. Course we need the manpower to man them….another problem to solve…

Spyinthesky
Reply to  Will Dutton

There is massive debate presently upon exactly what the true role of these ships is which is why so many changes are being introduced as the class develops. These first two ships are almost exclusively helicopter capable assault ships something that was proved almost impractical during the Lebanon landings way back so there is much confusion as to what’s best to be crammed within the limited space available even on ships of this size. Future ships therefore will have considerable modifications with large Well Decks like the previous Wasps as clearly this whole strategic debate moves one way or the… Read more »

A study was done for the USN on the optimal layout for a large amphibious assault ship back in the early – 90s? – and the design (which I had seen before but couldn’t find again) was reminiscent of the HMS Furious’ in 1918 with fore and aft flight decks with superstructure amidships and the flight decks connected by runways on either side. The design would have weighed in at ~ 65,000 tons – about the size of a Midway class light (for the USN) carrier and would have allowed simultaneous flight operations for helos on one side and AV8s… Read more »

Now THIS would be amazing if it ever hit the water…

I remember seeing this a while back and the concept looks promising. I’m not sure how the tethered quadcopter would work in a storm though? Trimaran, could this be the future T4X?

Will Dutton
Reply to  Spyinthesky

Great point. I guess in some respects it comes down to the enemy, theatre, allies and other external factors. While the US can choose to have much of everything UK needs to be more focused and with limited funds focus on what we want to be and what this looks like militarily. The problem is there is never a grown up debate, it turns into left wing making the country weaker (not always true) right wing perceived as stronger and more competent (not always true). So we tend to end up with decision by committee. For me if we have… Read more »

Herodotus
Reply to  Will Dutton

I agree, the post-war consensus on social welfare and the mixed economy would be a good model for defence issues. Defence should not be used as a political football!

Cam
Reply to  Will Dutton

Well the government did pay off 5,000 Royal Navy personnel after the 2010 defence review so the manning problems are all self inflicted!! But we are told no one wants to join! Bullcrap!. The fact is they could have bigger recruitment numbers in all of the UK armed forces if they really wanted to.

I watched a 1990s RN balistic missile submarine documentary and they were paying off good crew back then and they haven’t stopped since.

This article is a bit behind the times, the trials were completed several weeks ago and apparently the USN found some issues with the ship. Delivery to the fleet has been pushed back a bit…