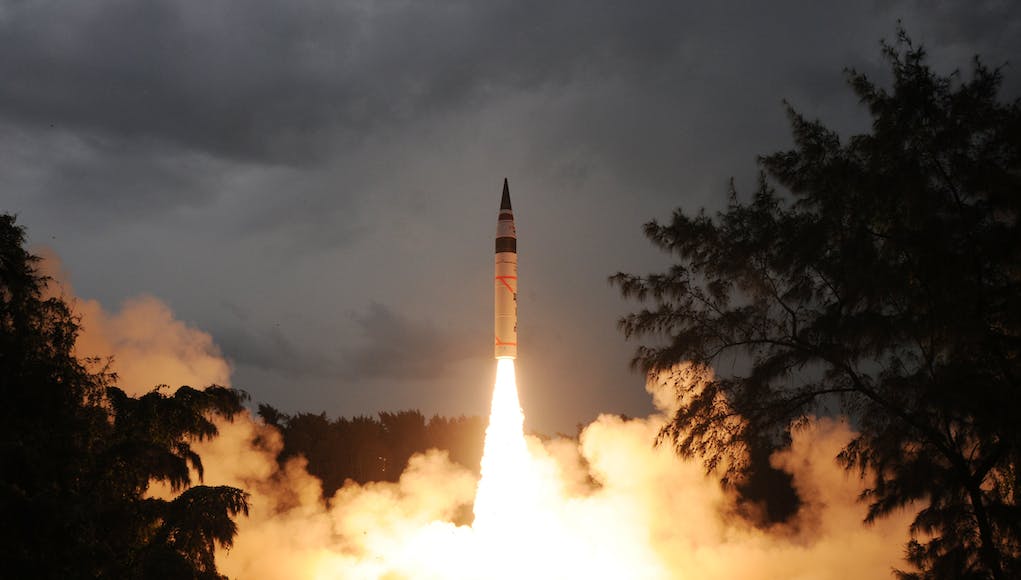 India has test fired its nuclear-capable strategic ballistic missile Agni-IV, capable of hitting a target at a distance of 4,000 kilometres, from a test range off the Odisha coast as part of a user trial by the armed forces.

Agni-IV is the fourth in the Agni series of missiles which was earlier known as Agni II prime. It has been developed by India’s DRDO and displayed a number of new technologies and significant improvement in Indian missile technology. The missile is light-weight and has two stages of solid propulsion and a payload with re-entry heat shield.

“The sophisticated surface-to-surface missile is equipped with modern and compact avionics to provide high level of reliability” sources in Defence Research and Development Organisation said.

This was the fifth trial of Agni-IV missile. The last trial conducted by SFC of the army on December 2, 2014 was successful.

I suppose British and Australians paid for this?

nah, we have bigger economy 😀

Until last year, when it was overtaken by Ethiopia, India was the biggest recipient of bilateral aid from the UK, receiving an average of £227m a year in direct financial support over the past three years.

You may have a larger economy and more people but you’re still accepting our aid and can afford nuclear weapons and a space program but your government can’t feed its own people.

I still disagree with stopping providing India aid and I think that as long as you need it, it should be there but all the same I thought I’d let you know.

We will have stopped all aid money to India by 2016

Should have use this money to help its people living in poverty.

I usually agree with your comments, but I think that this one deserves a little push-back. India became independent in 1948. That is over half a century ago. Since then India has had a lot of help from the UK, US and USSR. In fact, the Indians became quite expert in playing them off against one another. So what does “long term” mean? If “long term” is going to be the standard excuse for all defence spending in countries with terrible porblems of poverty, the surely all of them can use the same excuse. Doesn’t this mean that Kim Jong… Read more »

its aid ,
we dont want it, your govt fools you buy saying they give
http://www.telegraph.co.uk/news/worldnews/asia/india/9061844/India-tells-Britain-We-dont-want-your-aid.html

And millions still living in poverty

I’m not concerned with what we give them if anything, just there own infrastructure they are spending billions on programs , (space program, missile program and an aircraft carrier) yet millions of people live in abject poverty without access to clean water, food and education.

As explained, this gives them the ability to improve that situation.

But they aren’t doing anything about it India unfortunately has a fundamentally flawed social cast system the Rich will get richer and the poor will get nothing.

Kurt Leon Bayliss we are decreasing poverty at the rate of 15% we spend less than 2% of our 8 trillion dollar gd on budjet,
our space programme is extremely cheap, i,e why, britain, US and other foreign countries are turning to us to launch their sattelites in return of which we get money

Worrying – I wouldn’t put India in charge of a shotgun let alone a nuke!

SO WHY DO THEY STILL GET UK AID, you’ve already got 1000s of the buggers living here:-(

we dont need ypour aid, cameron forcefully gives it to NGOs and calls it aid.
the money is a peanut compared to * trillion dollar economy of India
http://www.telegraph.co.uk/news/worldnews/asia/india/9061844/India-tells-Britain-We-dont-want-your-aid.html

Still brown nosing them then nothing new there then.

first you people better remember india is not britain.you people think your small aid runs this country.your aid is nothing to us.we have money by our strong economy.you people talk like kids.you give that money because your country want to sell your fighter typhoon to us for big money.you people watch your debts and economy before talk about my country.

you think your country is super power.you always hide beside usa in any problems and you people talk about my country.you people want to talk about any country you better know about that country and talk.

if you want respect you also need to know how to respect others…………….next time you people better watch your mouth.

frankly you people jealous about our country growth.

They already have missiles already with estimated 120 warheads probably aimed at Pakistan and this could be provacation at Pakistan who may updates it missiles and increase no and power of its warheads.

Very sad when their people have nothing to eat and country like India and Pakistan spending millions on weapons.

It’s senisible for any country to want the best defence it can afford. Otherwise it may end up being an exploited colony for hundreds of years

India has the right to defend itself. It does not take uk aid and indeed asked the British government to stop sending and I quote “peanuts” as it was not needed and was more of a PR exercise to make the uncaring British conservative government look good

The comments here are depressing.

If i were indian id be pretty pissed too, open sewage and contaminated water sources need dealing with before missile systems. I was watching a doc about it last night, claimed there were more temples than toilets.

Fair enough, id still think investing that in domestic infastructure would be more effective in the long run. Fyi im not having a pop at aid or that, i get the aid goes straight to where its needed. Just doesnt seem enough.

When you have one inherently explosive neighbor who hates you to the core and wants to see you die someway or the other, an another one who doesn’t like your economic growth and wants to control and monopolize the sea routes over the ocean bearing your name, what do you think we should do? Do the budget cuts (which itself is pathetic when you take the defense budget against the country’s GDP (just 2.4%) and preach peace? And how much difference can that 2.4% do to the nation’s infrastructural and social growth? After considering the risk of leaving a land… Read more »

I was working in India (3 years) when Gordon Brown visited and announced a new £800 million aid package for a 3 year women’s education project in Uttra Pardesh. ( Above the existing £3.5 billion) Exactly the day after the Indian government announced that on the basis of it’s growing status a Space Defence Center was to be built. Cost £800 million. Make no mistake, India would love to see Britain on it’s knees and we no longer have the moral courage or unity to stand up for our disappearing values or self preservation.

Thanks UK Defence Journal for clarifying on Indian Nuclear Missile program. And no the Agni missiles aren’t built with UK or any foreign aid. These are the dumbest comments I read whole day. None of these people who talk of poverty or aid will come to fight for us in a war. It was David Cameron who was pitching the Typhoon to us for years that time why any of these guys didn’t talk of aid. Or was he giving the fighters in aid. The contract eventually went to France and Rafale fighter was selected.

They shouldn’t get another penny in aid from anywhere. ….perverse!!!

http://www.telegraph.co.uk/news/worldnews/asia/india/9061844/India-tells-Britain-We-dont-want-your-aid.html
.
we dont need, your goverment fools you, they give aids to christian missionaries trying to convert rurals

Sending it to Iran in truck ?

iran is close to pakistan, foe of india

India, like the UK, need to renew our Nuclear weapons systems to ensure no other country will use theirs against us. A nuclear free word would be great but unless it happens multilaterally, they’re a necessary evil.

they need to test toilet paper

Australia to withdraw Super Hornets from strike missions in Iraq and...