The Israel Missile Defense Organisation say it has successfully completed a test of the ‘Arrow 3’ Weapon System.

The Arrow-3 is designed to defend against ballistic missiles by targeting the threat outside of the atmosphere.

The test was reportedly conducted at a test site in central Israel and was led by Israel Aerospace Industries (IAI) in collaboration with the Israeli Air Force. 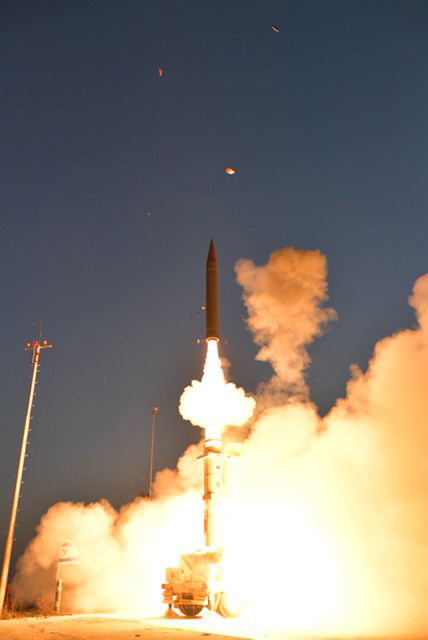 The company say in a release that once the target was launched, the Arrow Weapon System radars detected it and transferred the data to the Battle Management Control which then ‘established a defence plan’. The Arrow-3 interceptor was launched toward the target and successfully completed its mission.

“My congratulations to the Israel Missile Defense Organization, the Israeli Air Force, our MDA team, and our industry partners. We are committed to assisting the government of Israel in upgrading its national missile defense capability against emerging threats.”

The Arrow Weapon System is a major part of Israel’s multi-layered defense approach. This approach is based on four layers: Iron Dome, David’s Sling, Arrow-2 and the Arrow-3 Weapon Systems. This test is a major milestone in the operational capabilities of lsrael and its ability to defend itself.

Arrow-3 interceptors were delivered to the Israeli Air Force in January 2017 for operational use.

If this system proves to be successful on completion of testing, Israel could find a lucrative export market?

Britain being a nuclear nation should have some ballistic missile defence system, it should come with the cost of trident in my opinion, it’s mad we don’t have anything. Even our destroyers don’t have the capability, but I heard the RN are looking into it with USA.

I think we hide behind the long held concept of MAD.

That may not apply to rogue states of state sponsored terror groups though.

How much would an off the shelf purchase cost?

Or would it be cheaper to use the T45.

I’d read in the latest SDR of an ABM radar being explored.

We do have a dedicated radar that monitors “space” as well normal airspace at Fyingdales, operated by the RAF. Other sites around the UK do monitor the upper atmosphere though.

Of course. That is primarily for BMEW and space tracking I believe, providing data to the NADOC as well as NORAD, as opposed to a dedicated ABM system.

The radar I was referring to was mentioned in the SDR specifically for ABM,, but heard no more of it since.

Only problem with that is that without ABM all those radars achieve is to tell us, once the missiles are flying, to tell whichever Vanguard is currently out to sea to fire back, then to put our heads between our legs and kiss our assets goodbye. What is needed is an ABM capability that allows us to shoot down incoming ballistic missiles. Even if it’s off the shelf from US or Israel. I’d actually prefer that in this case as it’d be cheaper and proven tech that we can have now, instead of maybe 10 years time. Anything else id… Read more »

Agree on an OTS purchase.

As for the incoming missiles, that’s the point of MAD. They will not launch against us, as it will finish them.

An effective and comprehensive ABM system in some ways is extremely dangerous if it reduces MAD.

I do remember stuff in the press early last year how it was being claimed one T45 could technically defend the whole south east of England against Balistic Missile attack. However I think there was something of a process of pushing for the necessary upgrades to exploit that potential going on as in its present state its at best a paper defence. The present missiles would need to be upgraded to the latest spec versions at the very least and ideally those becoming available in a couple years. The radar arguably might be up to the terminal targeting job but… Read more »

Russia has an ABM system for Moscow and some other major cities. I’m not aware that anyone calls it destabilizing. A dozen or so in the UK could stop a “mad commander” or accidental launch.