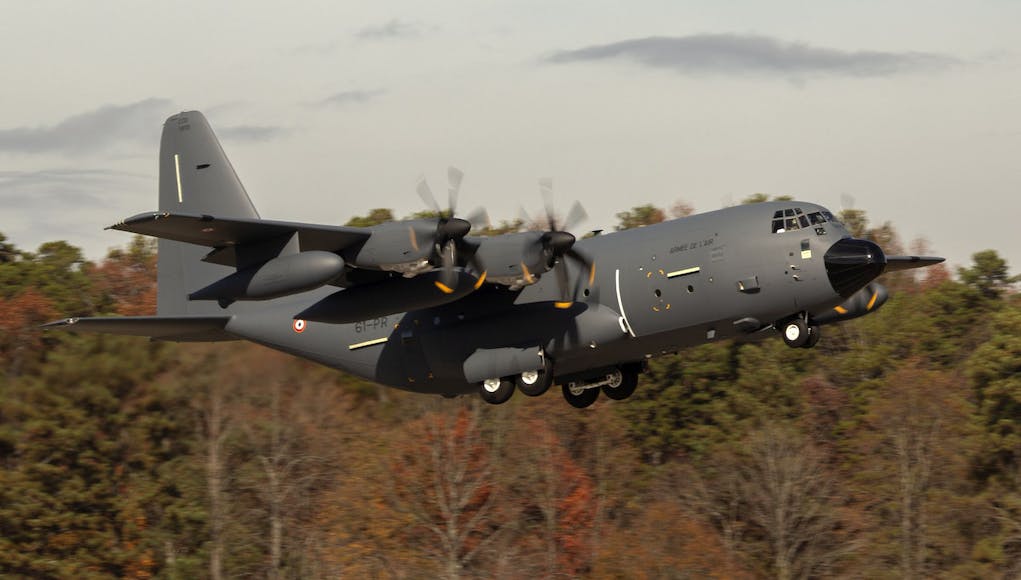 According to the firm, France has received a total of four Super Hercules aircraft — two C-130J-30 combat delivery airlifters and two KC-130J aerial refuelers — through a Foreign Military Sale with the U.S. government. The two C-130J-30 airlifters were delivered in 2017 and 2018, and first KC-130J delivered in September 2019.

All of these Super Hercules are operated in conjunction with France’s existing C-130H fleet.

“This additional KC-130J expands the Armée de l‘Air’s already robust airlift and refueling resources to not only serve as a national asset, but a global resource as well.”

France is the 17th country to choose the C-130J for its airlift and refueling needs, say Lockheed.

With this delivery, France joins a global community of KC-130J operators. In 2018, Germany announced the acquisition of a C-130J-30/KC-130J fleet, to be operated in partnership with France — making this the first operator relationship of this type in C-130J history.

“The C-130J Super Hercules is the global standard in tactical airlift, providing a unique mix of versatility and performance to complete any mission — anytime, anywhere. The Super Hercules worldwide fleet has more than 2 million flight hours and is the airlifter of choice for 20 nations.”

It’s a real pity A400M has not been able to refuel helicopters as advertised. This is a vital capability that the RAF should really have for deep insertion of special forces and CSAR.

I thought we would not be allowed to refuel helicopters or anything else, even if we were given a couple of KC-130Js as a Christmas present, due to the AirTanker consortium PFI thing?

I don’t know for sure but I’m pretty sure even the shitty Lawyers that the MOD used for the contract would have excluded refuelling for rotary aircraft unless voyager could actually refuel them. Also airbus and cobham that run the consortium would no doubt be delighted if the MOD was purchasing refuelling kits for A400M and possibly replacing C130J with A400M as was planned. I always thought that having 5 stand buy voyagers made no sense as a reserve AAR capability when there was nearly 30 A400M already plugged to do the job.

That is a very sensible thought,but we are dealing with the MOD fcs.

The A400M did have serious problem when conducting aerial refuelling, but Airbus have cracked the problem. The problem was two-fold. Firstly the A400M develops a lot of wake turbulence behind the aircraft, mostly generated from the propwash. Secondly, the drogue hoses they were using were to short, so when the basket was fully deployed it would oscillate all over the place due to the turbulence. They sort of solved the issue by doubling the length of the drogue hoses. The drogue’s basket still moves around but not as much, making it easier for pilots to line up their aircraft for… Read more »

A400 can refuel helicopters. Problem solved. The A400 can also do simultaneous paradrop from side doors. Seems all the problems have been fixed 😉

Not yet, since they did dry contact tests in August/September 2019. Wet contact tests are next on the agenda to validate the design. If they have not been done already these tests will be done very soon. Then it is a question of funding to make the necessary upgrades to existing air frames.
The A400 seems to be coming together nicely as the C17 production lines are shutting down. The future is looking promising for the A400.

Looks like the A400 has the possiblity but with only the RAF buying them for the futre need it might be low on the to do list. Yes I know Germany has bought more but do they need inflight refueling.

The A400 has been able refuel airplanes for a while. But the RAF was among the first countries to get deliveries so i do not know how much work is needed to retrofit this capability. If the existing RAF airframes can refuel jets, then i imagine the work required would be minor and done fairly easily and would’nt break the bank.

So now back to my original question, it seems that there is a possibility to have a battlefield/helicopter in flight refueling aircraft but would it be allowed under the Voyager contractSecond would the investment cost give a possitive return. Example but a realistic on a flight of Typhoons flys from the UK to the Falklands, they will refuel at Gib then under todays situation get Voyager support from the UK. My method the Typhoons refuel at Gib, have a KC130-K or Atlas from Ascension, one on the incoming leg and one on the outgoing leg, and then again on the… Read more »

I do not know, but Voyager cannot refuel helicopters so i doubt helicopter refuelling would be part of the contract.

Yes. Simple. RAF provides the pod-mounted aircraft. AirTanker manage them doing the fleet management alongside Voyager, joint tasking and specific mission planning. All things that AirTanker does extremely well. Aircrew would most likely be RAF, although some could be sponsored reservists. A400M maintenance would be provided under the existing contract with Airbus Military

I looked into this further. It seems the A400 should have the fuel lines and controls pre-installed on the A400 since refuelling was one of the design requirements. So the RAF would only need to purchase the underwing refueling pods. These can be attached in 2 hours from what i read. So this could be easily done by the RAF, then it’s a question of doing some tests to make it IOC for the RAF.

So in times of war we are sorted!!
The air tanker contract has, few, pros like having up to 14 AAR airframes if needed, a number we could not afford (apparently 😝)

Well said Lordtemplar. People do talk a load of ***** when it comes to the A400M and AirTanker. Helicopter refuelling nothing to do with prop wash. All to do with proximity of helicopter rotors to horizontal tail plane in a breakaway emergency manoeuvre. Airbus/Cobham funded tests with 120 foot hose and the problem has now been solved. Originally Airbus refused to fund this work which is why France made emergency purchase of KC-130J to refuel their Special Ops Caracal combat SAR helicopters. Simultaneous paradrop from both doors was a problem associated with symmetric airflow behind the aeroplane due to handed… Read more »

So it is possible to fit pods to the A400M for refueling. Then why is it not done, the A400M could be used in a tactical situation where the Voyager could be strategic. You need a long smooth runway for the Voyager the A400M can be used on rough short battlefield, soft field runways of about 1,000m. The RAF has I think 22 of these maybe more on order that is a large increase in refuling capability. I think it is also time that the RAF look at command and control modules that could be just rolled into the A400M… Read more »

Would it be possible to upgrade the RAF 130-J to the KC130-K? These would be useful for helicopters and say Falkland Islands or forward based squadrons to refuel. In the Falklands there is only a flight of Typhoons so a Voyager is to much, in forward deployed squadrons the airstrip is a bit rough and ready again not really suitable for a Voyager and just say we want to do a long range covert drop with SAS/SBS well a Voyager is no good for that. So back to the question can we convert the Js to KC?

If we did convert and the contract with Air Tanker allowed it, which I’m not sure it does, would only want a handful converted as those C130J’s of 47 Squadron are rather busy already in their role.

True I would also prefer that we buy a few KC130s, my understanding is that the KC130 K is a multi role transport/tanker that is why I was wondering if the upgrade was or is possible. The C130-Js can retain there transport ability but double up as a tanker, it would I hope be much cheaper, give the ability to the RAF and possibly work around this stupid Air Tanmker contract as the Hercs are not defined tankers but a battle-deployed unit.

Ah, with you Ron.
The whole business with Air Tanker is ridiculous.

Yeah air tanker is the worst contract every signed by the MOD.

This is tosh, I’m afraid. What the AirTanker contract does not allow is the RAF to set up a parallel refuelling service that would result in fewer calls on AirTanker to refuel RAF fixed wing aircraft. This makes sense since if you ask someone to in effect fund the whole enterprise up front from scratch predicated on a number of refuelling hours per year, your business case would get trashed if all of a sudden those hours were significantly reduced. If RAF wants to introduce A400M or KC-130J refuelling for rotary wing or in support of Special Ops missions it… Read more »

The C-130J comes in 2 variants. Short and Long fuselage. The UK bought 10 Short and the remainder Long. It is the Long fuselage version that is being retained.