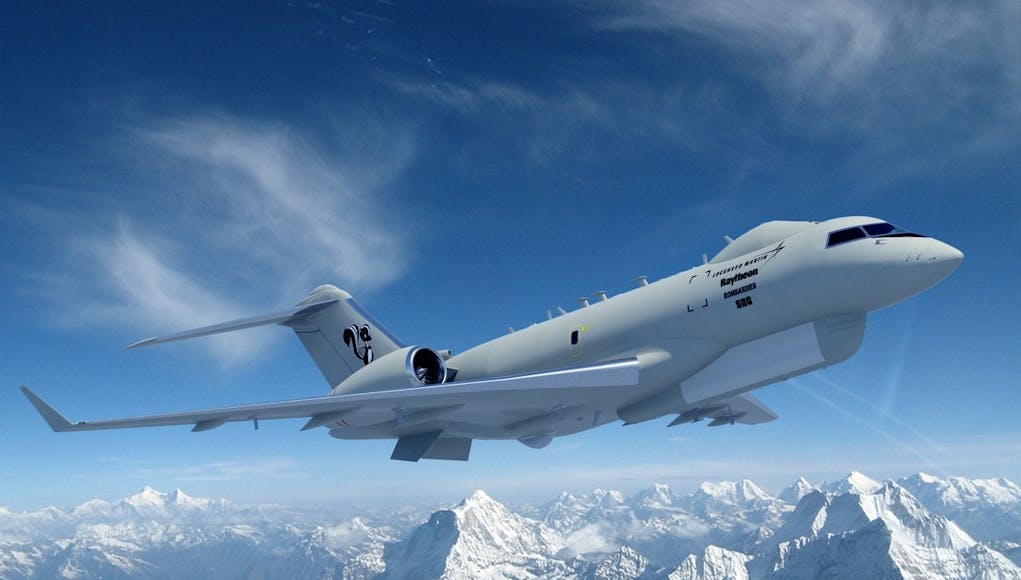 The Lockheed Martin-led JSTARS Recap team intend to provide the US Air Force a superior platform to the current JSTARS, do you recognise the aircraft?

The aircraft is heavily based on the work undertaken to develop Sentinel. Lockheed Martin will serve as the lead systems integrator and will bring a robust suite of battle management, command and control (BMC2) services; Bombardier will provide a proven, affordable business jet; Sierra Nevada Corporation (SNC) will perform modifications to the Global 6000 aircraft; and Raytheon will bring to the team their experience with ground surveillance and battle management systems and JSTARS communications.

Does this look familiar to you? It should, it mirrors the UK Sentinel programme.

The Sentinel is an airborne battlefield and ground surveillance aircraft based on the Bombardier Global Express ultra long range business jet and serves a role similar to JSTARS with the RAF, the jet was adapted by Raytheon to meet the RAF’s requirements.

Sentinel was originally known as the ASTOR (Airborne STand-Off Radar) programme. In 2014, Prime Minister David Cameron announced the retention of the aircraft in the face of their expected retirement due to budget cuts.

“The Lockheed Martin Skunk Works JSTARS Recap team recently expanded its depth with the addition of SNC, bringing greater value to the U.S. Air Force. SNC, which previously qualified as a prime contractor candidate for the program, will perform modifications to Bombardier’s Global 6000 aircraft, and will help obtain the necessary airworthiness certifications from the FAA and Air Force.

Bombardier said in a statement to the press:

“Bombardier will provide its ultra-long-range Global business jet platform, which is less expensive to operate than modern airliners and is uniquely suited to the JSTARS Recap mission by allowing the on-board radar to see further and deeper into valleys and survey the battlespace for extended periods of time without refueling.

Great article and one that should be remembered – we can and do produce great solutions.

It is a national disgrace that our sentinel fleet is being reduced. They have performed amazingly over the past 5-10 years.

Yet another strange MOD decision.

I am all for fiscal responsibility – but this is barking mad – we have paid for the platform so it is running costs only which come in at less than £10m p.a. out of £36bn. Petty in the extreme.

Did no one think to try and sell Sentinel to the Americans? I bet only a very few of them even know it exists. If Sentinel was American the world and his wife would know about it.

Again a brilliant aircraft proven in many operations is let drift away.

Any odds on the RAF buying JSTARS in 2021?….After all got to keep the foreigners in work.

Agreed. We don’t do enough to sell our own designed hardware abroad. Look at stuff like Brimestone. Cutting edge world class missle yet it’s just used by us and the Saudis. If America designed it they would have sixty countries buying it up.

Sam – The Yank military have been trying to buy Brimstone for years. Its their politicians screwing it up. Again. Still at least they need us to deliver it where it counts…

Chris, here Is an interesting short video with reference to the US Navy wanting to buy the Brimstone. https://m.youtube.com/watch?v=l2hj5USIl6M

Of course the MOD are noted for scrapping equipment which has exceptional capability .Nimrod 2 was was scrapped willy nilly to save money thus our maritime surveillance disappeared for years and now we buy the American P8 which costs 10 times as much but wont see a service start date till 2020.Cameron scrapped the Sea Harrier fleet and the Carriers leaving the RN with no air capability. Its heart breaking the utter stupidity of our so called Masters

You couldn’t make up these crazy decisions by our own country/government. Stop wasting foreign aid money on countries that don’t warrant it or waste it on frivolous projects. Come on MOD, start protecting our own country first, nobody else will. The 3 services have suffered enough with cuts, Putin must be laughing in his vodka as we cut our teeth and spend it on other daft projects.