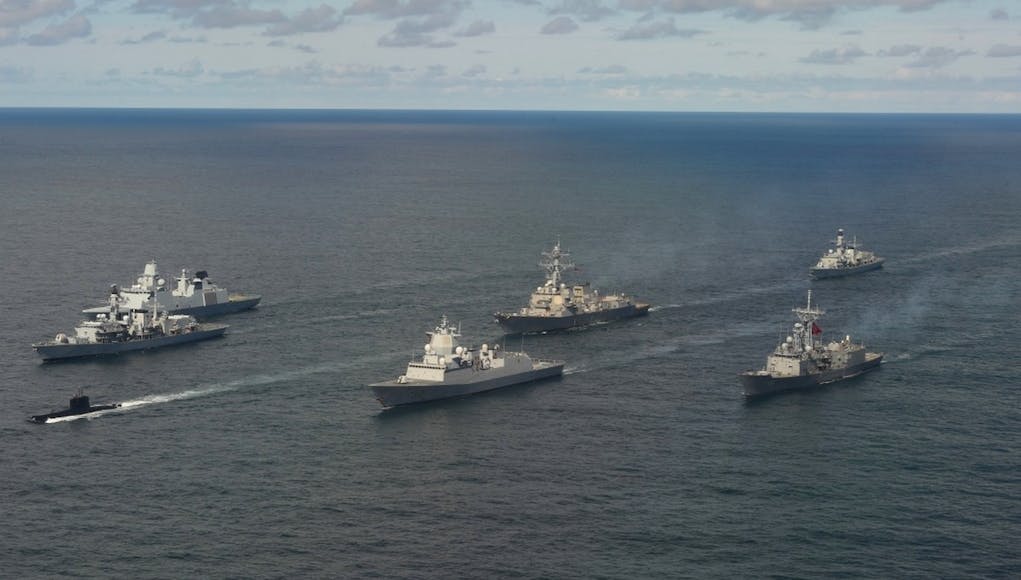 Ships, submarines, as well as aircraft and personnel from six Allied nations are converging off the coast of Iceland for Anti-Submarine warfare and Anti-Surface warfare training.

As the host nation, Iceland is providing logistical support in Reykjavik.

To enhance the simulated multi-threat environment, maritime patrol aircraft from France, Norway, the United Kingdom and the United States will support the exercise.

The aim of Dynamic Mongoose is to provide all participants with complex and challenging warfare training to enhance their interoperability and proficiency in Anti-Submarine and Anti-Surface warfare skills, with due regard to safety.

Each surface ship will have the opportunity to conduct a variety of submarine warfare operations. The submarines will take turns hunting and being hunted, closely coordinating their efforts with the air and surface participants.

Due to COVID-19 threat, NATO say that measures taken by both Icelandic authorities and the force contributing nations will be strictly followed by all sides during the port visits and training.

“Exercises today seize opportunities for NATO and Allied nations to sharpen warfighting skills by focusing on high-end capabilities including Anti-Submarine Warfare. DYNAMIC MONGOOSE will ensure we remain prepared for operations in peace, crisis and conflict. In this regard, I appreciate the outstanding host nation support of the Iceland and those nations that have contributed forces. Dynamic Mongoose will, I am certain, be a highly effective exercise.”

“NATO’s annual Anti-Submarine-warfare exercise Dynamic Mongoose remains one of the most challenging exercises and an excellent opportunity for NATO nations’ naval forces to practice and evaluate their anti-surface and anti-submarine warfare skillsets in the challenging environment of the North Atlantic. This exercise is a unique opportunity to enhance naval forces’ war fighting skills in all dimensions of anti-surface and anti-submarine warfare in a multinational and multi-threat environment.”

‘maritime patrol aircraft from …… the United Kingdom’
Not borrowed , then ? About time.

Where does the term ‘Aircrafts’ come from? The plural of aircraft is aircraft.

I believe I am right in saying that it was changed by the last labour government. Must be their fault surely?

Aye, and it’s now sheeps, not sheep as well.

Don’t worry guys…Wetherspoons will be opening up again shortly!

Just what everyone up and down the country has been looking forward to! I don’t think.

Back on topic, good to see we can field 2 x T23 ASW variant plus an SSN and MPA.

In another act of anarchy it is now ‘Weatherspoon’ !

Or could it be Wheterspoons ?

If you look at the aircraft thread on Youtube it also uses ‘aircrafts’. Very odd.

I think this must be a US term. Part of their ongoing battle to separate themselves from any colonial linkage to Britain. God damn it, we don’t speak English!

even after 4 years here, I still discover new spellings and pronunciations. I agree that there must be a “Department for changing English words” in the federal government somewhere. So glad I’m returning to UK in August

Wow…that’s going to be a huge change for you and your family…will you have to quarantine? And are you glad to be leaving at this point…with all the social upheaval. Not to mention the presidential election … how that god awful sack of shit can put himself forward again is a mystery to me!

only 4 years away so not so huge…my youngest doesn’t remember much though. It’s 6 of one, half a dozen of the other really, but its a good time to return all things considered. If I’d left it much longer it would start getting complicated. I’ll certainly miss the extreme nastiness of US politics and the brazen partisanship of the cable channels..

The picture shows ships from Denmark, Norway and Turkey, as well as UK and US. No Canada, France or Germany. Can we please get pictures to match the narrative or no pictures at all? Thanks

Do we know which assets we have sent on this operation……..thanks

HMS Trenchant, HMS Kent and HMS Westminster are participating, along with at least one RAF P-8.

Thanks for the information Lusty

Be a good exercise to run a Perisher course, I wonder how good a US Arliegh Burke is in ASW compared to the T23. I also wonder if Kent and Westminster will be slotted into the Carrier Group next year as they would have had by then the last major ASW exercise. I am surprised that Trenchant taking part, I would have thought it would have been one of the Astute’s.
Hope they have fun up there.