It has been reported that Airbus Defence & Space is examining opportunity for European industry to develop a next-generation combat aircraft.

A draft document from the Defence Ministry on ‘military aviation strategy’ said it was still unclear whether the new jet would be manned or unmanned. It said it was also possible that the jet would be designed for both options and then be flown with or without a pilot depending on the type of deployment.

As it would be a European project, it is likely that one or more European companies would be chosen to develop the jet. The Tornado jet, which Germany has been using since 1981 – although it now also has the newer Eurofighter jet – was also made in an international consortium called Panavia.

“Some months ago, the German MoD prepared a strategic defence capability roadmap, and they are looking for something to replace capabilities to fill the gap that will come with the replacement of the Tornado. They have asked us to investigate what potentially could be the solution.

We are currently working with the German air force on customer needs. We are thinking about something that will enter into service by 2030.

What we cannot afford to do is a completely start-from-scratch aircraft. We are talking about the re-use of certain Eurofighter components and looking at what we are doing in our development cycles, for more prototyping. We are looking at a varying portfolio of new technologies.”

Germany’s armed forces are looking into whether it would be possible to extend usage of the Tornado jets into the mid-2030’s.

Hope it is a manned and unmanned aircraft.

As in a duel-capability aircraft? Quite possible, drones are being created from surplus F-16s and F-4s, although the expense and size of a manned aircraft like Tornado would probably negate there being a need for a “drone mode” so to speak. Can see it being split between manned aircraft and drones personally

A world beating aircraft and still capable as ever.

Not to be too negative, but according to the wiki Germany has now dropped to 9th place in defence spending. $36bn or 1.1% of GDP. Less than Japan.

I wonder if they are about to make the same kinds of mistakes we made back in the seventies. Too many projects and not enough cash to pay for them.

They already have that aircraft. Its called the Typhoon. And if the Germans had followed our lead and made theirs as adaptable and multi – swing – role as ours then they wouldn’t need to fund yet another design.

I am sure this announcement and its timing had nothing to do with the UK Referendum on leaving the EU. No really …

Surely a Tranche 4 Typhoon would make much more sense than building anything new? The Tornado, Typhoon and Gripen have already shown how great an improvement can be made to existing designs by upgrading the systems and components. 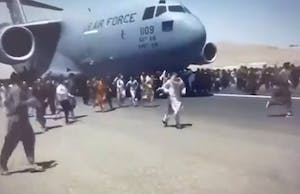 August 23, 2021
The latest episode of the popular defence podcast discusses the fall of Afghanistan, the failures in the US and NATO responses and the implications for the future.

UK has so far evacuated 7,000 people from Afghanistan