The V-247 is an unmanned aircraft that manufacturer Bell say will combine the vertical lift capability of a helicopter with the speed and range of a conventional fixed-wing aircraft.

The aircraft is designed to provide “unmatched long-endurance persistent expeditionary and surveillance capability and lethal reach”, as well as runway independence to operate successfully in maritime environments and locations without secure runway availability.

According to Bell, the V-247 Vigilant’s design boasts a number of capabilities and features, including: 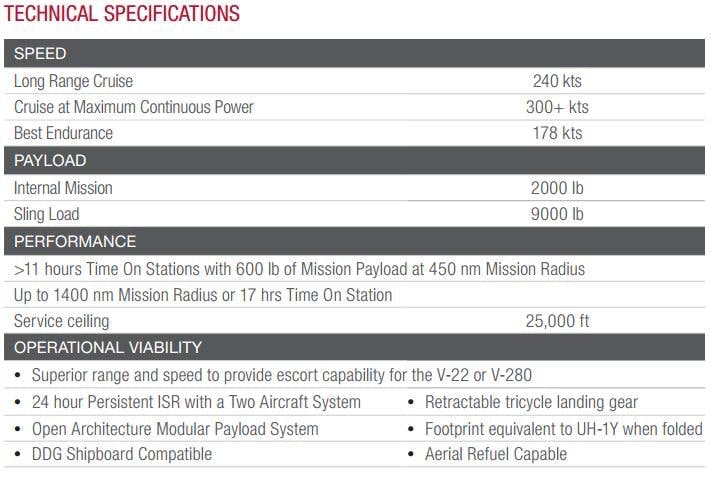 Bell are also touting the Vigilant as a naval Early Warning platform, claiming that:

“The V-247 Vigilant tiltrotor can perform day or night as a picket, providing an extended line for sea or land-based assets and giving advanced warning to commanders, and can likewise be armed due to the platform’s air-to-air missile capability. Modular radar and sensor payloads extend the eyes of the MEU, providing advanced warning of incoming threats.”

“Leveraging lessons learned from our extensive history and experience with tiltrotors, we have found the best available solution to fulfill the Marine Corps need for a Group 5 UAS.

The Bell V-247 Vigilant will give military customers the capabilities needed to reduce the complexity of deployment, increase speed of employment, reduce mission times and increase response time – all critical elements to completing missions to save lives and protect our freedom.”

Great endurance. How much does Crowsnest weigh? Tech specs for V-247 say 2,000 lbs internal payload. Is that enough? It would be nice to have something on QE class to put Crowsnest or its successor 10,000 feet higher than Merlin can.

Any clues as to when this might be in production?