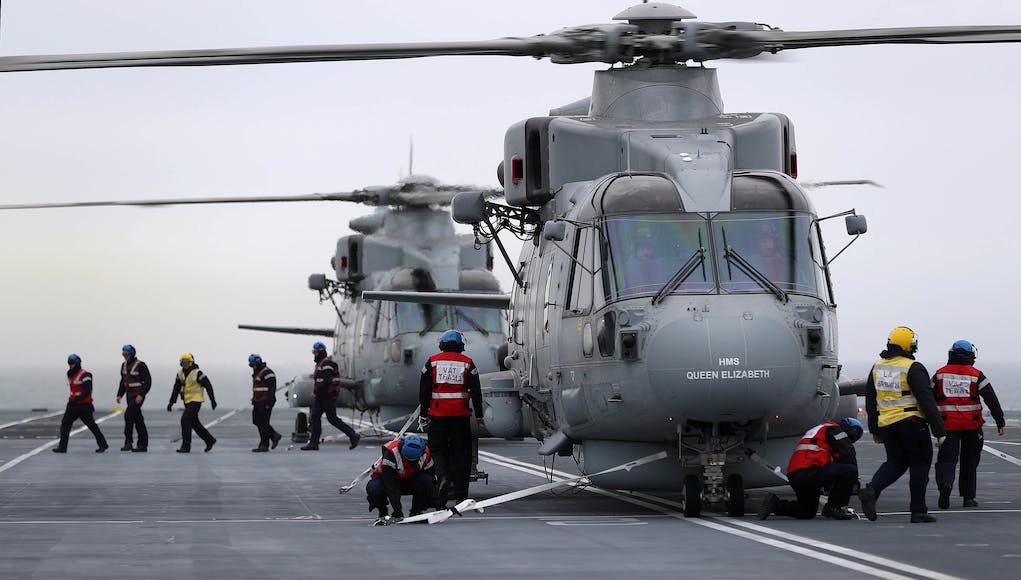 Engineers who maintain Merlin helicopters have saved £12m with what they call ‘a simple fix’.

The Royal Navy say here that by replacing just one part – not an entire complex piece of machinery – they will save time and money across more than 50 front-line helicopters, vital to Royal Navy operations around the globe.

“One variant of the Merlin is the mainstay of submarine-hunting and airborne early-warning operations, operating from the decks all major Royal Navy and Royal Fleet Auxiliary ships, especially Queen Elizabeth-class aircraft carriers. The other is crucial to supporting Royal Marines in the field, transporting commandos, equipment and casualties on the battlefield. According to the original maintenance guidance for the helicopters, written more than 20 years ago, the Merlins’ nose landing gear should be replaced when the aircraft undergoes maintenance after 3,500 hours in the skies.

The experienced team at RNAS Culdrose, home of the submarine-hunting and airborne surveillance model of the Merlin, the Mk2, questioned the need to replace the entire section: an expensive and demanding job. Each front set costs £230,000 in parts alone – but the engineers reckoned only one single pinion actually needed swapping.”

“This is a first-rate example of how diligence, exceptional expertise and common sense have made a direct positive impact. They are to be commended for their innovative thinking. This ethos of empowerment, of taking responsibility and constructively challenging norms, is a cornerstone of what makes the Royal Navy global, modern and ready.”

You can read more on this from the Royal Navy here.

What’s the chance the team get 10% of the savings as a Christmas bonus?

That quote with all of the buzz words of the day…

Yep like taking your car to a car dealers for annual service and having everything replaced as per manual when in fact the cars been sat in garage due to covid for 2 years. (Farther in law). MUG….
It how the capitalist world works.

How many other millions are being wasted on other vehicles? So in life service contracts that’s say parts need to be replaced at huge cost and loss of vehicle readiness when in this case it’s just the retaining pin needs replacing? I’d be looking at every vehicle maintenance cost and asking the boys in the garage is this right? Can’t imagine this is an isolated case. It must also be the same for the rear landing gear aswell I’d presume. Yes inspection and testing befor replacing items is a must. So £12 million for the front alone the rear ones?… Read more »

Many systems in the surface fleet where looked at as part of the introduction of RCM (Reliability Centered Maintenance) Much of the change it just in case work was binned saving millions. The actual failure rates of equipment is way lower than the manufacturers advertised numbers.
Things are a little different in the Air world where preventative maintenance is still king for obvious reasons…if something fails you crash and probably burn.

Yep totally agree but doesn’t mean people shouldn’t be questioning replacement of parts just because they are told to do so by a handbook when said part is found not to be defective. Has this new culture been rolled out across the other services?
And also a new wildcat then every 2 years with the £12million savings.

They don’t. Within the UK’s military aviation world on an aircraft, you have items that are classified as critical components, i.e. if something goes wrong with it, there is a risk to life, e.g. helicopter main rotor blades etc. These would have been given a finite life by the manufacturer say 5000 flying hours. However, in between this the item is given a service life interval, where it is inspected say every 250 flying hours, then at 1000 flying hours undergoes non-destructive testing such as X-raying. After every inspection the paperwork is analysed by a team of analysts, who will… Read more »

Herbert Lott Book token for 25 quid if you are lucky.
I proposed an Alteration and Addition (A&A) to the Fwd Mezz deck on LPDs. It was implemented and improved the movement of ammo from the Mags to the LCUs and removed a lot of maintenance intensive equipment that was never used.
25 quid book token!

The quy who invented the ski ramp only got a pittance for the idea considering the number of nations who use the things nowadays.

I am reassured that we are still a nation of engineers not just bankers or politicians.

Hats off to them! I think they should be getting a good bonus, this is the type of excellence we want to foster. Passing them a % of the savings is a good incentive for follow on ideas.

Things like Ajax have been embarrassing and the MOD has to take some proportion of the blame. As I understand the trials were never without issue, it was optimistic at best to envisaged all those hulls being assembled would turn out okay.

Aircraft maintainer reveals the no.1 weird trick that aerospace manufacturers don’t want you to know!

Just think how much more money would be saved across the Military, If this kind of thing was ‘rewarded’ and kept ‘in house’, away from the swindling private sector, and the swindling ineptitude of government ministers on procurement committee’s!

The local Pompey Rag illuminates the above story with something of a different light: 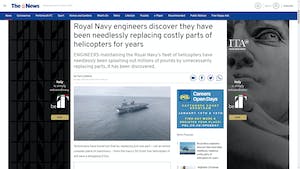 As an engineer who flies, I would hope that the manufacturer has thoroughly tested their products and takes the best data available to determine their service life. Continuous improvement requires more data which only the operating maintenance organisation can routinely provide. So it follows that providing a major asset must include the full maintenance, repair and operations systems and processes with data provided back to the manufacturer. Thus the data shared and lessons learned should benefit all operators and the people who maintain, repair or operate. Commercial organisations have to manage risk both engineering and financial but with a rational… Read more »

“France has ordered 169 H-160M helicopters to equip all three branches of the country’s armed forces.”

And so is this! Didn’t we sell the tech/company to the USA in the first place?

Someone’s been reading Portsmouth evening n News paper head line someone somewhere thought is a good idea too change the whole front landing nose wheel assembly at a cost instead of just the pinion pin Culdrose must have had the most expensive tyre tip going FAA crew kept doing this until 2 ex FAA boys noticed the the Airframe parts renewal ( flying hours) had been used for all parts of the Fwd Nose landing gear instead of the pin .What other little miscalculations can be found around maintenance of Fleet equipment ?

Been happing for 20 years someone has made a lot of Money and won’t be happy now.

I hope they told the RCAF too.