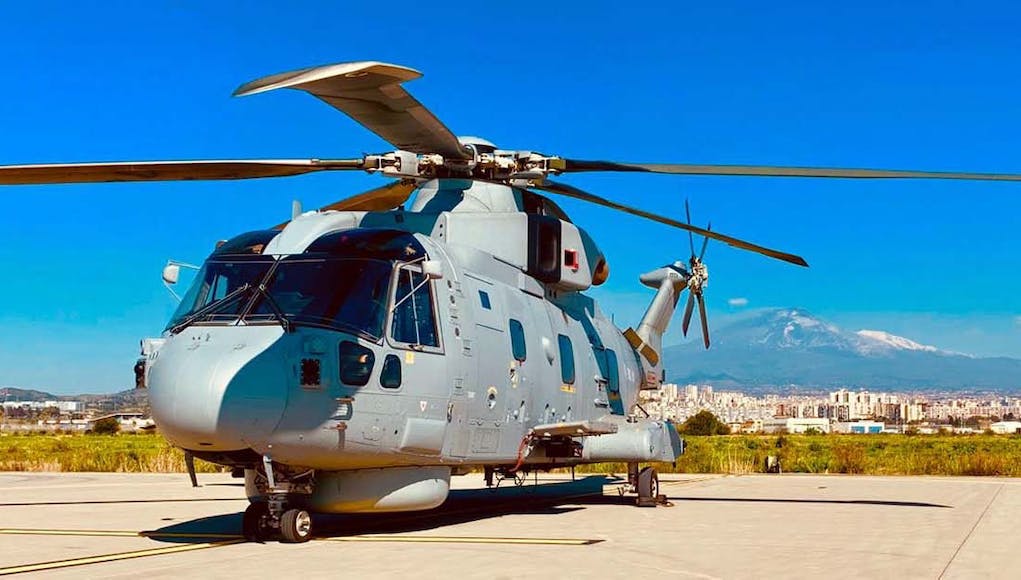 Dynamic Manta is one of two large-scale anti-submarine exercises NATO runs; the other, Dynamic Mongoose, tests the ability of those same forces but in the cooler waters of the North and Norwegian Seas.

According to the Royal Navy in a release:

“Nine surface ships led the hunt for five boats – including one British attack submarine – as helicopters such as those from 814 dropped sonobuoys and ‘dipped’ their sonar in the Mediterranean to listen for the tell-tale noises made by their underwater foes.

The chance to ‘play’ with both nuclear and conventional diesel-powered submarines in waters six degrees warmer and nearly ten times deeper than around the squadron’s native Cornwall – all factors which affect the ability of sonar to find boats – made Dynamic Manta an extremely useful training exercise.”

“We succeeded in tracking ‘hostile’ submarines and scored confirmed kills. There was also some friendly cooperation with a boat – not all submariners deserve a torpedo from a Merlin!” said Commander Sarah Birchett, 814’s Commanding Officer.

They are hardly likely to say stuff like that!

I’d imagine given the reputation of the Silent Service and British SSN’s they were extremely hard to find.

It’s appeared on a few sites: Save the Royal Navy in their article about the Astute class, Wikipedia etc have quoted a British officer saying the Americans were “blown away” by how far away Astute was holding one of their Virginia Class boats (USS New Mexico I believe) on sonar.

Yes the report mentioned by Evan below is what I too had read.

LOL apologies at the same time!

Did not take it that way, you’re fine mate.

You know you never hear stuff like that with regards to the 3 Seawolf class SSNs the USN operates. My guess is because those boats are an order of magnitude quieter and faster than any other boats out there at the moment. Unfortunately they were so expensive to build only 3 were ever built. The Virginia class was a compromise more geared towards the littoral environment. I think some of the early Virginia’s aren’t even cleared for under the Arctic ice packs. However the current Block IVs being built and launched now are greatly improved with additional quieting and improved… Read more »

The Seawolfs are good, but with only 2 built as SSN’s they’re a limited resource. They’re also not likely to be any better than an Astute. Astute is 10 years younger than Seawolf and is likely to field a more sophisticated sensor suite. The USN was also playing catchup with the Seawolf Class as the RN had raised the bar on stealthiness with the Trafalgar Class with their rafted machinery and pump jet propulsor. The USN only trialled Pump Jets on a couple of Los Angeles Class so was lagging behind the RN, radiated noise from Los Angeles Class was… Read more »

Wish we had more of them, prefer buying more of these than giving Boeing billions for a few more Chinooks.

Why? The Chinook is a better helicopter in its primary role.

I was talking about the HM3 version of Merlin, we only have 30 and that’s to cover Carrier deployment as Anti sub and AEW plus support the TAS type 23s while we have 60 Chinooks ,do we really need that many?

Glass Half Full
Reply to  GWM

Any change in Merlin numbers may well depend on how MoD see ASW and AEW developing over the next decade or so. Dipping sonar might be added to Wildcat as ROK navy have done. USV with VDS might deploy from T26 and T31, in numbers with sufficient speed, range and endurance to provide greater coverage. Both seem relatively affordable options to expand ASW. V247 UAV could be a far more capable AEW platform for carrier, amphib or escort use. Obviously there is still a question mark on platform cost and whether the program goes ahead, but V247 could offer a… Read more »

What about the Commando helicopter force don’t they have 30/40 Merlins and wildcats.

Might sound like alot, but it’s worth noting that numbers were alot higher only a few years ago.

The 28 Wildcats are the FAA HMA2 models not CHF.

I think you did know, just correcting for the benefit of others who might think the CHF has 28 Wildcats!

Maybe the MoD is playing a long game. I looked up the Bell V-247 after GHF mentioned it and it does look as if it has the potential to be an extremely effective AEW platform and also with 3 internal payload bays plus wing pylons and something like 5,900kg fuel plus payload capacity perhaps even able to do some if not all of a Merlin ASW role as well. If the project does go ahead and the U.K. were to procure some V-247 then we might even get to the point a few years down the line where a significant… Read more »

Glass Half Full
Reply to  Julian

Something else to factor into speculation on long term MoD planning is a transfer of Army Wildcats to the Navy, similar to the Merlin transfer. Both variants have very high commonality and the transfer might result if the Army sees a compelling product created from the US Future Vertical Lift- Light program for a Scout aircraft which supposedly has a target IOC for 2028.

In the end it boils down to role, if I am doing long range SAR or ASW out in the Middle of the Atlantic the Merlin wins hands down no contest! It has good automation, comfortable, a huge range, fast and most importantly for those scenarios three engines! For the military transport role it doesn’t fit too well, it is fragile, complex to maintain with an unnecessary third engine. It is touted as a medium lift type yet if you remove the rotor it is actually longer than a Chinook and requires a similar landing spot. It carries half the… Read more »

Well we know it couldn’t have been a German sub because they’ve all been tied up at the dock for ages. haha

Yes, my bad. It’s what I get for typing my comments up so late!

Thanks for the clarification.

If Gav’ gives us some more helicopters, I’d be a happy man.

That will explain why Ambush has appeared at Gib then.

FlightGlobal is reporting that Bristow helicopters is in financial trouble. Its share price has dropped about 90% in a year.
I thought it was crazy to privatise airsea rescue. Has HMG made any plans, re airsea rescue, should Bristow go into administration?