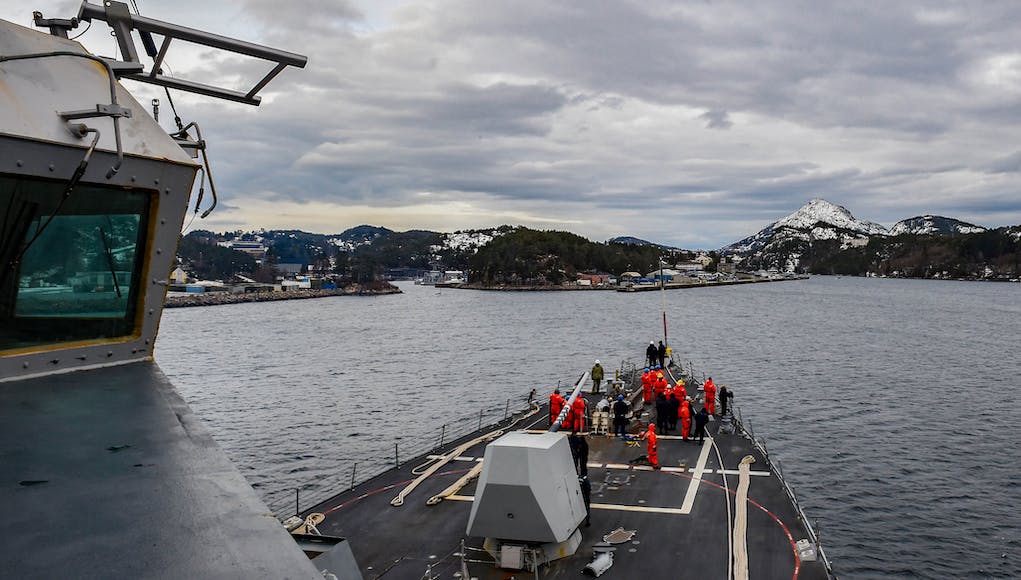 Share
Facebook
Twitter
Pinterest
WhatsApp
Email
Standing NATO Maritime Group ONE (SNMG1), under the command of US Rear Adm. Edward Cashman, is in Bergen for a scheduled port visit to finalise planning for Allied Maritime Command led exercise Dynamic Guard 19-1, hosted by Norway.
The alliance say that Dynamic Guard is a multi-national exercise, merged with Norwegian led exercise TG 19-1 and aimed at maintaining proficiency in maritime electronic warfare and anti-ship missile defence.
“Exercises play a key role in building and maintaining the readiness of Allied forces and ensuring interoperability of NATO’s maritime forces,” said Cashman.
“This visit to Bergen will enable SNMG1 units to coordinate with Norwegian Navy exercise leads and the other participating units to ensure a safe and effective exercise. We will work to maximize the training benefit of the Dynamic Guard exercise for all of the participating forces.”
SNMG1 is composed of the US destroyer USS Gravely, the German navy replenishment tanker FGS Spessart and the Polish frigate ORP General Kazmierz Pulaski. In addition to SNMG1, naval ships and submarines from France, Spain, Norway, Denmark, the Netherlands and Germany will participate.
Standing NATO Maritime Group One (SNMG1) is one of four standing maritime task groups composed of ships from various Allied countries.
These task groups form the core maritime capability of NATO’s Very High Readiness Joint Task Force (VJTF). They provide a continuous maritime capability to execute NATO missions across the spectrum of operations, say the alliance.
0 0 vote
Article Rating

Keep an eye out for container ships lads

Not likely no. Shame as I’d like to see that too.

Although the names seem lacking, it does mean that it’s impossible for anyone else to discern what the operation is based on the codename. Example: if Argentine spies had seen communications relating to “Operation Corporate” in 1982 they wouldn’t know from the name alone that it referred to the operation to recapture the Falklands.

Agree. I also read that.