It has been reported that NATO drone strikes have killed two Pakistani insurgents last night in Kunar province.

According to the source, no civilians or security forces sustained injury.

Since 2004, the United States government has also attacked hundreds of targets in Pakistan using unmanned aerial vehicles. Most of these attacks are on targets in the Federally Administered Tribal Areas along the Afghan border in Northwest Pakistan.

The strikes began during the administration of George W. Bush and have increased substantially under his successor Barack Obama.Some in the media have referred to the attacks as a “drone war”. The Bush administration officially denied the extent of its policy; in May 2013 the Obama administration acknowledged for the first time that four US citizens had been killed in the strikes. Surveys have shown that the strikes are deeply unpopular in both Afghanistan and Pakistan, where they have contributed to a negative perception of the United States.

Good timing photo that tree bottom right makes it look like a skull. 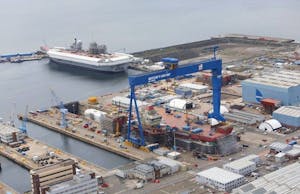 May 16, 2022
Babcock at Rosyth has been awarded a 10-year contract to provide dry-dock maintenance for the Royal Navy’s Queen Elizabeth class aircraft carriers, beating H&W...