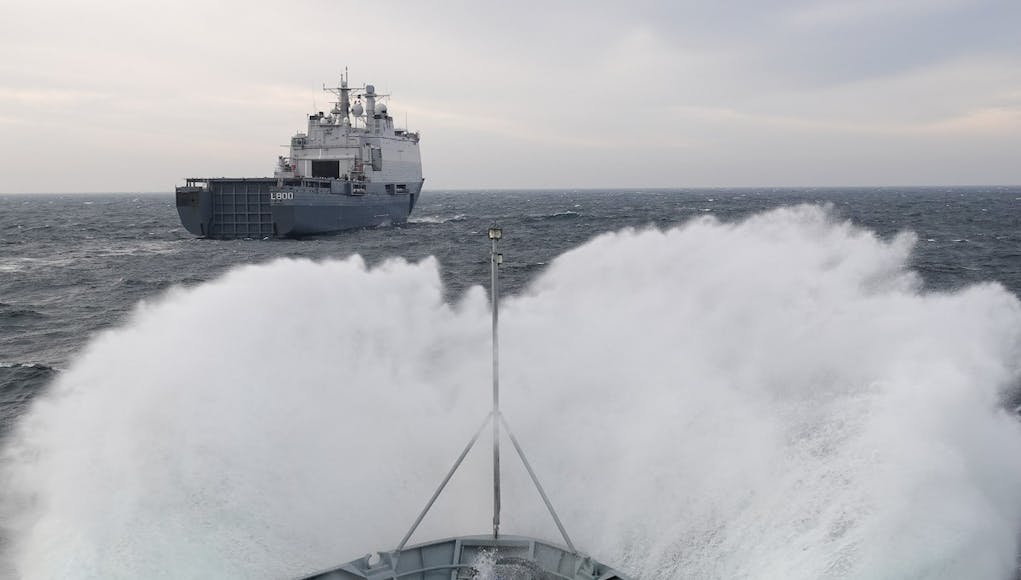 Standing NATO Maritime Group 1 (SNMG1) is currently on a scheduled patrol of the Baltic Sea.

According to NATO, SNMG1, consisting of the Netherlands flagship HNLMS Rotterdam and the Danish frigate HDMS Peter Wilemoes is operating in the Baltic Sea to enhance maritime situational awareness and to further improve interoperability with allies as part of a planned deployment to the area.

SNMG1 and SNMCMG1 are two of the four multinational, high readiness maritime forces composed of vessels from various allied countries. These vessels are permanently available to NATO to perform different tasks ranging from participation in exercises to operational missions.

Watching the Warship Documentary looks like back in 2020 things were hotting up with the Russian’s even for cold war standards ,now its increased tenfold in 2022 with live fire drills by the Russian navy off the coast of Ireland.

Is that with the towed array hitting the Russian sub?

Ye it was a merlin which spotted the sub second time round at periscope depth then the RN ship tracked it side by side , then the sub cut across trying to evac and hit the array, the RN captain wanted to know if it was done on purpose but he concluded it was the subs mistake.

Hello Dave, when transiting to the area the Frigate went through a storm at 12 Knots but developed a leak in the 4.5inch gun, I was wondering why they cannot train the weapon facing towards the stern when going through heavy seas as was the practice a few years ago maybe one of our enlightened brothers can help with my bone question.

I’m just projected from what I saw Steven and I am not qualified to answers such a question to be honest.

I am so glad I wasn’t the only person to think of that. However, I don’t think they knew the point of egress and I can’t blame anyone for not going on deck to check!

Hello Barry, The only reason I mentioned it is because I remember crossing the North Sea on the way to Norway and seeing all the escorts with there guns facing aft due to the bad weather, I was just curious to know if the modern 4.5inch gun platform can turn 360 degrees if so then the officer of the watch at the time will have some explaining to do.

Your quite right Steven when we’d hit Hughie weather ,we could do either depress the Barrel Max or 180 the turret prior too doing either we’d make sure the Muzzle cover was fully on and tight and also clips on the turret door are both fully pushed down and lashed up

Hello Tommo, Thanks for the eye opener, I was thinking that the new type of turret could face aft that is why they were in heavy seas with the Barrel facing into the weather.

That is one hell of a wave!!, we had our kit washed off the deck of the HMS Hermes in 1981 when it was in a 40 foot container besides the sky ramp, the Harriers on board used it for target practice as we had no way of picking it up and it was seen as a shipping hazard.

Hopefully not a crazy Ivan manoeuvre, since it took out one of our few ASW assets. 12k tonne submerged displacement vs light weight, sensitive electronics. Single outcome.

Well watching it that was the captains concern , but as I said he put it down to a Rus sub fk up.

Indeedy. Either way, indicates virtually no margin for mishap even in ‘peacetime’ (if we needed such a demonstration). Still really approve of RN’s preparedness to be so open in these programmes. Encourages, in a population often accused of no interest in defence matters, a shared investment in both the daily duties involved and the crew members who carry them out (with less concentration on the number of sausages eaten on a patrol – mildly patronising, perhaps). After all, if the significant majority are not maritime centred now, how else would they ever get the opportunity to form a bond in… Read more »

The chance of the cable being snagged and fouling its propeller leaving it immobilized would be utmost in the Sub commanders mind if considering doing it intentionally. When we captured the Soviet towed array in 1982 with HMS Conqueror we outfitted the sub with cutting claws rather than trying to use the hull to sever it, and did it without the sub even being detected by the towed array it was stealing.

Slightly off topic, but it appears the US Navy has the same leak problem regards downed F35 as the RN has: 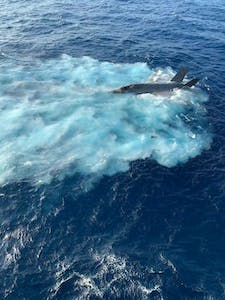 When did they loose a C model Farouk?

Tuesday in the South China sea, I would have linked in the BBC article , but its as if they take great pleasure in this 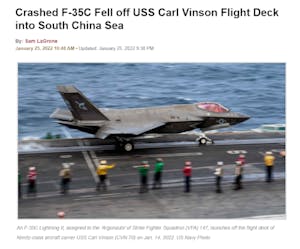 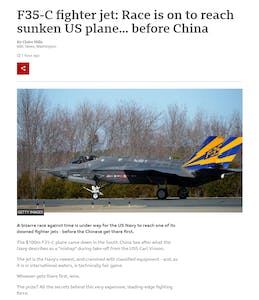 Cheers mate, that one got past me….

Does anyone watch the BBC anymore?

I cannot watch the BBC News anymore. I have retuned my news to SkyNews.

No. There is a perfectly legal means to stop paying the television tax for an anti-British (and western) service (sic).

I wonder how much anti-BBC feeling has been influenced by Russian cyber-propaganda as the BBC has covered the many abuses of power in Russia and broadcast it to the Russian people using the world service?

Not here. My antipathy goes back to pre 2010.
They seem far too left leaning in their coverage and too keen to push their version of news, rather than just presenting it and leaving people to form their own conclusions.

But apart from the home BBC news on TV, I support the BBC, their varied programmes, the world service, and their input into our soft power.

Problem is a lot left -wing friends think the BBC News has a right wing bias. Can’t be both can it?

Yes, lots! But not the news.

Probably pilot error from all accounts.

I posted this a few days ago in another article, South Korea has grounded its fleet of F-35s after problems with the landing gear, something we have seen before but it appears has still not been rectified, as yet.

Nigel.
Yes I remember you did, however in this case, I am led to believe that that the arrestor wire snapped and that the F35C isnt to blame.

Landing gear incidents have happened to all fast jets types at one time or another. But of course Nigel will only mention F35 incidents. Because he hates it, like a 8 year old hates sprouts. . 😄

Including famously the TSR2 prototype

The cause of what the statement called an “inflight mishap” is under investigation.

A spokesman for the Navy’s 7th Fleet in Japan, Lt. Mark Langford, said Tuesday the impact to the Vinson’s flight deck was “superficial” and the warship and its air wing had resumed normal operations.”

Ugggh, an even worse place to lose one than we did.

But the US at least have the resources to keep everyone away.

Could be pilot error. Landing on a carrier is still very demanding.

A buildup of NATO forces, albeit in small numbers, will help Putin think again before making the wrong decision.

The Baltic Sea is a bullet magnet for any NATO warship – so, I do hope those matelots have some mahoosive cajones.

One could only hope that not just NATO airforces were on standby but also the Swedish and Finnish forces.

In addition, a heartfelt ask would be for SEAD assets ready to give Kaliningrad multiple spankings and denude Rus forces the opportunity to interdict NATO Baltic Sea operations.

Meanwhile, Latvia is always in my heart and good luck to eFP.