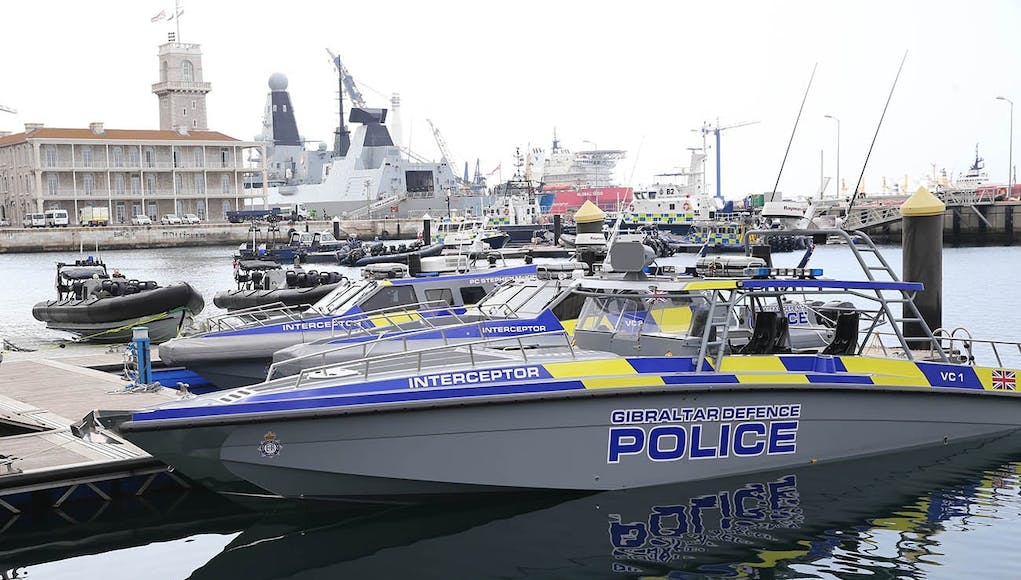 Three new high-speed interceptor vessels have been delivered to the marine section of the Gibraltar Defence Police.

The interceptors have been named after three Gibraltar Services Police officers who died 75 years ago in an explosion in Tangiers.

A future maintenance facility will be named after another officer who died on that day, Sergeant Terence Henning.

The vessels, which feature state-of-the-art navigational and safety equipment, were fitted out by South Boats Ltd on the Isle of Wight.

The largest vessel, the Charles Curtis, is a 44ft fast interceptor. The Abraham Attias is 36ft and is powered by three 300hp outboard engines. The Stephen McKillop is 40ft and powered by two inboard diesel engines delivering propulsion via twin jets.

The GDP’s Chief Officer, Rob Allen, said that the new vessels would enable the GDP to continue to carry out its role with modern, fast equipment.

“In just the last year or so we now have a new headquarters building, a new police club, new vehicles in our fleet, new firearms and other equipment and now a new marine fleet.

On behalf of the men and women of this Force who have continued to perform to a very high standard, carrying out their crucial job in an ever more dangerous environment, I give my thanks for all of this considerable investment.”

Are these to chase drug runners or Spanish Frigates?

Is that picture really Gibratar? If it is I think the T45 will see off a Spanish frigate.

Why do they need three different designs? Through life support is going to be more costly.

Nobody said they were new boats just new to Gibraltar.

anyway when it comes down to it we are Nato allies so these little tiffs over Gibraltar nothing to worry about really.. Gibraltar will be all right..

For goodness sake. Must you all trivialize everything. These boats and the facility to serve them are named after four men who died doing their duty. Have some respect.

agree with you geoffrey

Gotta admit that they look cool though

Forget the pitiful boat the RN have stationed in Gibraltar. It’s less than useless when your facing a Spanish Frigate. Station one of the new River Class there. That will send a message to both Spain and Gibraltar. If Spain protests that it’s ‘escalating the situation’ then it should be reminded with a montage of the hundreds of incursions by Spanish warships into Gibrators territorial waters.

Lewis that would require spherical objects. They’re very rare in HMG and have been for a long-time.

What point would there be basing a large OPV (larger than a WW2 Flower class Corvette) with a 5,500 nautical mile range to patrol a harbour and the rather small economic waters outside it? The Scimitar class are entirely appropriate for the tasking, in the end we don’t want to get into a real fight with Spain over this matter. They allow us to fly the flag in a measured way which is not needlessly escalatory. We don’t actually have that many issues with the Spanish Navy, they tend to behave themselves albeit they do on occasion stray into British… Read more »

Are these converted vessels seized from smugglers by the GDP?

Just what is Spain achieving sending its vessels into Gibraltar waters? RN sends a patrol boat out, and then… Repeat process a few weeks later.
We are allies. Gibraltar was ceded to the UK long ago.
Gibraltar will remain a vital UK PJOB, especially in regards to SIGINT.

As to the article, fine looking boats to complement Scimitar and Sabre.

Just from the picture above, the Type 45s are BIG!!! They truly are fantastic and something we should be proud of. I sincerely hope that money can be found to fully maximise their potential – CEC, Mk41 VLS, etc.,.

I just hope money can be found to fix the propulsion issues….

Hey Paul – what I have read is that the money earmarked for the Mk41 VLs has been diverted to pay to fix the engine issues. Not sure how true this but that’s what I have seen published elsewhere. I really hope it is not accurate and the money is found for Mk 41. These are superb ships but need investment to see them used to their full potential.