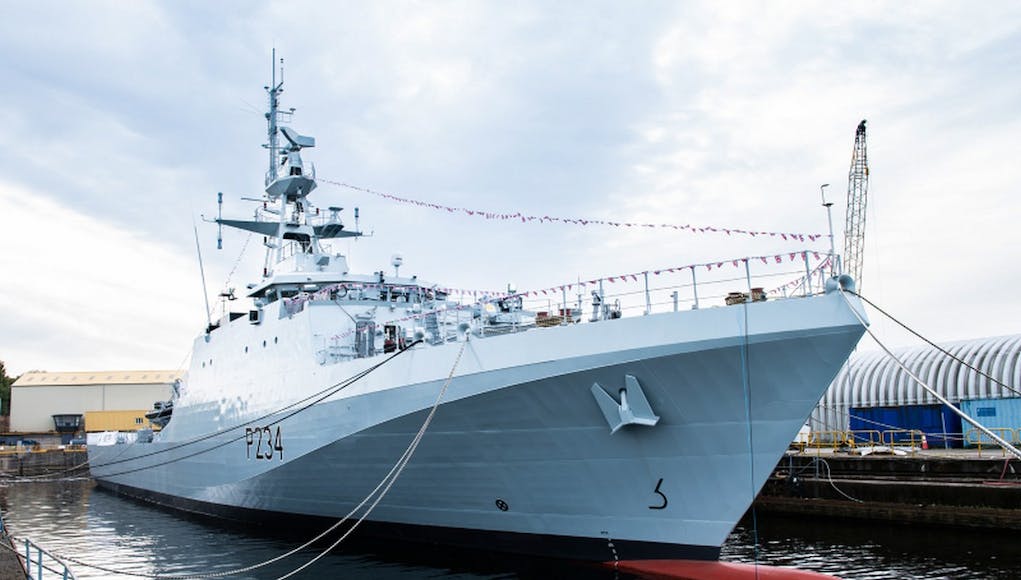 The Royal Navy’s final of five new offshore patrol vessels, HMS Spey, has welcomed her first sailors on board.

The Royal Navy say that HMS Spey is nearing the end of her build on the River Clyde in Scotland and five members of the ship’s company are now living on board.

“This is a significant milestone for Spey who, when she officially becomes part of the fleet, will join her sister patrol vessels Trent, Tamar, Medway and Forth. More sailors will join in early September before the ship begins preparations for her delivery voyage to her home port of Portsmouth.”

“Even though we are in the midst of a virus pandemic I have been really impressed with how the teams from Defence Equipment and Support and BAE Systems has safely and tirelessly worked to get to this point. It is an exciting challenge to bring HMS Spey out of build and I look forward to being joined by more of my ship’s company to bring the newest ship in Royal Navy into service. We will make sure the best has been saved for last.”

“Our team is proud to be supporting HMS Spey through the final build stages ahead of her homeward sailing. We will continue working closely with our supplier to ensure the Royal Navy receives the world-beating equipment it needs.”

The Royal Navy also say that the second batch of OPVs are part of the Royal Navy’s forward presence programme which will see ships forward deployed on operations around the globe.

“It will see the ships remain on task while members of the ship’s company work on a rotation basis, giving them time to take leave, complete promotion courses and undertake training. The OPVs provide enough space for a flight deck and accommodation for 50 embarked Royal Marines. The flight deck is large enough to support the Fleet Air Arm’s Wildcat and Merlin helicopters.”

The addition of Martlet to the 30mm on these would add some serious teeth when operating alone from forward bases. It’s such an easy increase in capability for the platform, and quite a significant one – it’ll not happen.

Granted I would imagine it’s a relatively quick retro fit should anything hot up but it’s the same old story really.

Atleast we added two miniguns to the batch twos, increasing its fire power.

Well with the introduction of 40mm in to the fleet with type 31, a 40mm gun could easily be added.

Would the 40mm fit in the same deck footprint as the 30mm?

That would offer some AAW capability as well.

Yeah. Save the royal navy did an article on it, and made some drawings of possible additions.

Yeh, that was a really good article and well worth a read.

The Big Man
Reply to  Rfn_Weston

Rear Admiral Paul Halton did say “We are thinking about how we might enhance the lethality of the Batch II OPVs” back in September last year.

Still believe they should have an ISO put in the space next to the crane. The ISO would be used as a hangar to house a pair of Scheibel S100 type UAVs. It would be a significant step up for the ship’s surveillance capabilities.

That’s my (practical) dream upgrade too. Ages ago I saw renders of a River R2’s max ISO container capacity for humanitarian use and, apart from lots on the flight deck (6? I forget), it showed 1 x 20′ ISO port and starboard of the crane as well so the design already explicitly size-checked those areas for space and fixings to host a 20′ IOS container each side. The location works out perfectly as well since obviously the main container doors can open onto the flight deck but also, assuming the S-100’s were to ship in dedicated containers that also had… Read more »

Hi folks,
50 Marines! I was not aware of that number, I thought it was slightly lower than that, and that obviously includes all the kit they carry. Quiet immpresive upon checking the spec of these ships, I supose we could do with a few more.
Cheers
George

I think 5 B2s OPV’s is enough for now. We need more Frigates!

Yes, a very useful number. I would see the River 2s not forward based as supporting special operations and also as a useful component of a distributed landing force. I would give them a 40mm or 57mm for this role.

Talking of Spey, The River Spey that is, it’s beuitiful just now and one of the best fishing rivers I’ve ever fished.

Anyway anyone know where HMS Spey will be based? Is she going forward based?

Is one defo being based in the Med, it makes sense as we have two very strategic territory’s there, maybe based in cyprus or gib?

John, I think One will be needed full time to train the relief crews for the forward deployed B2s, whom are flown to where they are based.
Another be needed in home waters on general tasks or if necessary relive a forward deployed vessel for a refit.

I forgot to add, even though the returning crews will get some leave, they will need a vessel to exercise on for rest of time when back in UK to prepare for next forward deployment.

The current B2 RC disposition is: Falkland Islands – HMS Forth Med – HMS Trent Caribbean – HMS Medway Sending HMS Tamar or Spey to SE Asia (based at Singapore or Brunei?) seems a reasonable bet, although a GP Type 23 frigate would be much preferable if one could be found. It seems unlikely the fifth ship will be forward deployed, too much to do in home waters. If she was, I’m dubious about the sometimes mooted idea of sending her to the Pacific or the Indian Ocean – unlike France the UK no longer has colonial territories in these… Read more »

Not always about force, though. They are presence vessels.

If these have SIGINT fit, for example, could be useful.

I agree with the Martlet calls as seems a cheap and effective enhancer, but I wouldn’t go much further.

The lack of hanger is a biggest pain.

Ukraine did eventually get their gunboats back. Iran still has hms Cornwalls rib and various quite well armed gunboats that they have swiped.
Presence?Our enemies will just laugh at us.

Yes, but until HMG give the military the money they need long term we cannot use the wary stuff for presence, as they are too few. Nor should we IMO.

These vessels are not force projection. Just like Hearts and Minds is not a full on barrage.

Cornwall was shameful, yes, but would you have gone to war over it? It is just a RIB.

Did not know they had taken other gunboats?

The sad thing with Iran is that so many are pro western.

I wouldn’t go to war over a RIB, but what about a river class?

If Iran tried to take a River then yes I’d expect our ROE to allow them to defend themselves.

Would be utterly scandalous otherwise.

Those masts do appear to have quite a lot of bits hanking off them, so they may have some sort of SIGINT capability. The Russians used to use unarmed trawlers after all, so a grey painted and (lightly) armed RN ship would be a step up on that.

The B2’s do look rather good as well 🙂

A good-looking ship and great to be up to 8 OPVS! However, the idea of global patrolling with a one-gun patrol boat, with no helo, no hangar, no air defence, no ASAW capability, not even a CIWS, is really rather ridiculous. Cannot think that any potential enemy will be other than amused and our allies must shake their heads in disbelief. A ‘presence’ such as this is purely tabloid-political posing for the Brexity Make Britain Great Again horde, it has little to no military value and simply underlines how threadbare our forces are. The Rivers are ideal for the OPV… Read more »

I would say global presence and reassurance with the ability to police pirates and drug smugglers. These are not toy boats. They are approaching the displacement of a WW2 destroyer. Although derived from the Amazonas class they incorporate significant combat hardening design features. Very much a wolf in sheep’s clothing. A River 2 can carry 50 RM with Javelins; and with a helo and 2 RHIBs could land them. https://www.thinkdefence.co.uk/2016/06/thoughts-batch-2-river-class/ With a full warship combat management system they can be uparmed quite easily. As I understand it fitting a 40mm or 57mm would be quite straightforward. Money would be an… Read more »

Are we still keeping batch 1 river class in operation too..?

In my opinion these offshore patrol vessels are overpriced under gunned and have no helicopter hangar……This is what should have been ordered!!. https://en.wikipedia.org/wiki/Khareef-class_corvette

I served on one of the sister ships to the last Spey. I wonder if this one will become known as “The Party Boat”… ☺️

Glad you approve Harold (Iqbal) but quite a weak effort at trolling. You must do better, weak, 2 out of 10.

On the contrary, you are rather easy to make bite, you replied, and yet again a weak response, this time however as you have made an effort to use another language, I will give you a 3 out of 10. This is easy….keep it up.

And your abusive racist and bigoted intolerance is noted and reported. Sigh! you liberals realy do become the new Nazis.

@Troll H.
Speaking of Yourself, I would say!

He should know RN ships do not have a crew. They have a Ships Company.

Trent towed back into Gib with engine problems apparently. Unlikely to be just bad luck.

Trent has been at Sea since the New Year, so unlikely to be something major! If she had, we would have heard about it early in the year!