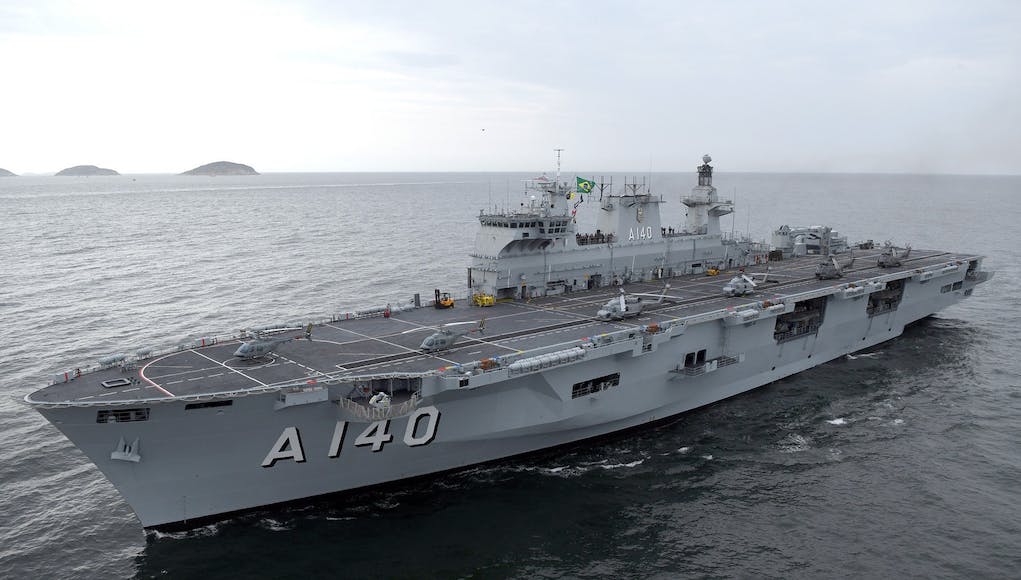 The signing of the contract between Brazil and the United Kingdom for the acquisition of HMS Ocean took place on the 19th of February 2018 on board the vessel.

HMS Ocean was decommissioned on 27 March 2018 in Plymouth.

Then, on June the 29th, 2018, the Ship Weapons Show Ceremony was held at the Her Majesty’s Naval Base in Devonport, Plymouth, UK and on August 1, 2018, PHM Atlântico started her journey to her new home port in Rio de Janeiro, with a stopover in Lisbon, Portugal.

“The ship will add to the Brazilian Navy important amphibious capabilities and naval operations with embedded helicopters to maintain the safety of the South Atlantic and the defense of the country’s maritime interests anywhere on the planet.

Designed to operate with up to seven aircraft in its convoy and 12 in the hangar, it can transport 500 to 800 Marines Operational Groups and design them by helidransport or surface movements, employing its four landing craft, from a distance of up to 200 miles from the coast (about 321 km).“ 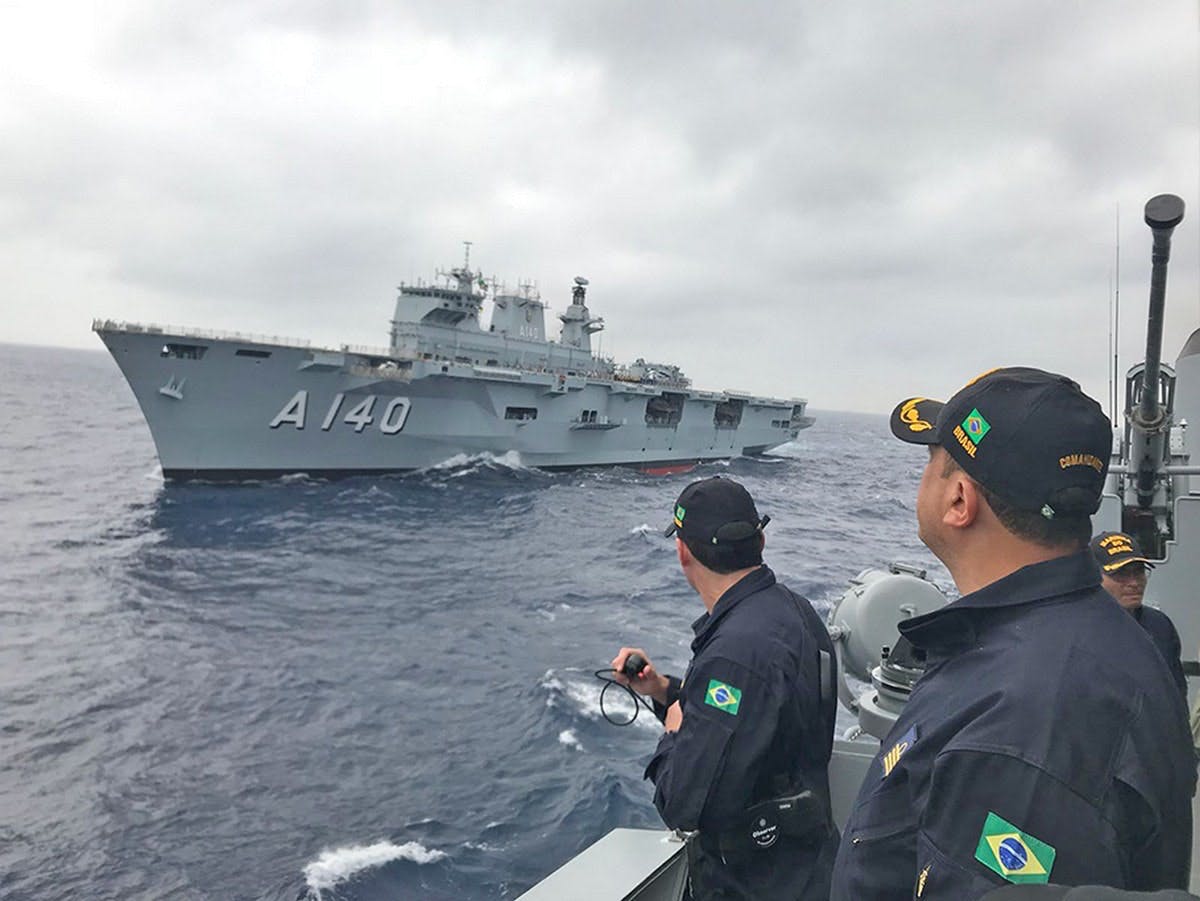 More information about the vessels new career can be followed through the official pages of the Brazilian Navy on Facebook, Instagram and Twitter but that’s about it for the coverage of this versatile vessel from the UK Defence Journal, she’s in new hands now.

I wonder what their next bargain will be?

Argyle, Lancaster and Iron Duke probably – that or they will go to Chile

Apparently She was Falling to bits and no longer requir

Don’t be fooled by the nice fresh external paint job, the former HMS Ocean was worked hard and the Brazilians are going to have fun keeping her going especially as the availability of certain spares is difficult (due to the vessel being built with off the shelf end of line equipment to save on costs). That being said in comparison to the NAe São Paulo (former Foch) she will be far easier to maintain and operate. The NAe São Paulo was a death trap by the end of her career, to be brutally honest Brazil should never have decided to… Read more »

I love the way they land helos on the deck immediately – no trials, no training – they lost their last carrier some time ago so how have they kept currency?

Just do it. It’s a pretty big deck. Don’t have to write safety cases and receive releases to service. Don’t hold Haddon Cave type enquiries when things go wrong. I remember when a Lynx hit one of the whip aerials on a Niteroi class frigate. They lost the bird but rescued the crew. Held an internal enquiry to establish the facts but there was no Coroner’s court or duty of care arguments.

Is this a giveaway or is HMG being smart? Supplying spares for many years. I suggest the latter!

the u.k will rue the day they let her go, as with many R.N ships they still have years of service left in them when they are retired, a case in point was the type 22 frigate. ark royal lost 5 years before her due by date. no wonder we’ve no ships we retire the ones we’ve got too early, if the q.e class are expected to give 50 years service, then all ship built for the R.N should be the same.

Any sign of a replacement helicopter landing ship?
Nope thought not.
Ocean was a steal, just refitted and modernised at UK taxpayers expense so she can serve until mid 2020’s before needing further work. Once you take the cost of the refit away it cost the Brazilian navy about £17 million to buy Ocean.
Bargain of the year

i can;t see the R.N getting a replacement. i’d suggest the removal of a bay class ships superstructure and fitting a full deck.

POW is the replacement but with a son of f35 to cover air defence.

Wonder what happens to these idiot pols when they finally “run out of other peoples money”…?

is anyone else having a problem with text not filling in the box while typing? I was trying to post and the words were coming out in some sort of code!:D

it was the right time for the RN to let her go as all most of the innards are commercial grade parts with little or no spares available or even manufactured anymore – thats why the refits were so expensive as we were reverse engineering obsolete parts to keep her going. she wasn’t build to a military spec and realistically only had a 10-15 year lifespan for what they need she will be great – just dont expect her to be able to turn in a south Atlantic winter as she does not have the power – it was only… Read more »

To me selling HMS Ocean to Brazil is a much better outcome than sending her to the scrappers,however cheap the deal may have been.

conversion of ark royal, which was retired 5 years before her date, should have been the one to replace ocean. illustrious had a small conversion refit when invincible went, and ‘lusty’ took oceans role for a good 10 months before heading to the turkish cemetary

Absolutely not, Illustrious being kept on longer than Ark Royal was not done for some asinine reason she was in a worse material state! The years Ark Royal spent in Portsmouth early in her life doing nothing had a serious affect on her general material state. People say the word ‘Refit’ as if it is a magical fix all that can help keep a vessel in service indefinitely. The reality is the best way to keep a vessel in a good material state is to use it, Ark Royal sat at Portsmouth doing nothing for years. She was robbed for… Read more »

Anyhow, I wonder what will happen when these idiot, shortsighted pols finally “run out of other peoples money” as they, really, already have…

Would be interested to know what self-protection the Brazilians have added. The Phalanx are gone but the fwd mount is still visible as with what look to be the 30mm cannon on the port side.

30mm Cannons was part of the deal, Phalanx removed- will be added to QE or POW at a later date. Not really too sure what defence the Brazilians will add to her in the future though.

Thanks Lusty! Much appreciated.

She was also sold with her four landing craft, which you can just make out in the image above.

catapults and a bag of stones!

Not really sure what the Brazilians would need to defend against anyhow. Certainly not the Argentines. Perhaps they heard Uruguay was planning on raising and refitting the Graf Spee to spearhead an invasion…

Miss Ocean. Always seemed much, much bigger than the Invincibles; I think due to no ski jump meaning if once out on flight deck you looked for’ard meant no visual cue to say ‘no more ship’. She was worked hard and proved that we really needed two LPH (LHA’s ?) built to naval standards. She was a good test for desgin elements for QEC when it comes to housing and deploying the EMF. The new carriers will be wonderful LPH so we don’t need a direct replacement as such. We could do with replacing the Albions’s and Ocean with a… Read more »

Whatever they’re replaced with, now’s the time to start planning for that decision.

I personally favour the LHD ships, such as the ones in service with the RAN. Could be very useful in carrying additional F-35B in a ‘jeep carrier’ role in a Falklands style conflict, whilst retaining a large hangar, vehicle space, and a dock.

You can never have too many flighdecks. But I can’t see the RN getting another class of ‘flat top’. We do need new dock ships. 3 would give us a bit of a reserve. Aviation facilities would free space in the carriers if more F35b were needed; but buying more big aviation decks just in case shouldn’t be a priority. A design driver for USN amphibious vessels is that they can move 500+ in a day. It means the USN / USMC is never many days away from the point of need. As our carriers dove tail more into Gator… Read more »

We should replace two Albions and Argus with 2 LHD’s based on Mistral design the buy 4 LSD replacements for Bay class and make sure they have hangar facilities this time. That would give us the most flexible amphibious fleet inside the current budget to man it. The LHD’s can both carry NATO role 3 hospital.

Ideally we would start this process now with vessels assembled at Rosyth using existing crane and other QE class facilities.

Still hoping they will replace RFA Argus with one.

original carriers came from modernised civilian ships , why not look into it again?

The QE class will never replace Ocean in LPH role – you can’t park an 80,000 ton ship a few miles off a Beachhead and expect it to survive!! All the bullshit about them doing just that is a smokescreen to mask selling off a key Naval asset!!!
Our Brain Dead Politicians simply have no idea! God help us in any future conflict with Westminster full of village idiots!!